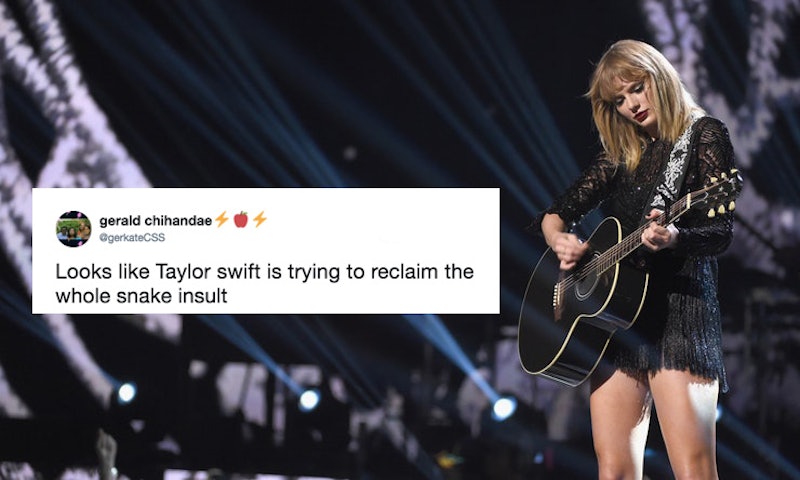 The award for the summer's most intriguing tweet definitely goes to the woman behind "Shake It Off." But these fan theories about Taylor Swift's snake video tweet suggest that the possibilities are endless — and, whatever this video means, we're likely to find the aftermath really damn entertaining. (Bustle has reached out to Swift for comment, but did not receive an immediate response.)

Clearly, the singer is coming out of hiding and wants the world to know. After Swift deleted every Instagram post, thousands of tweets, and her profile pictures across social media on Friday, August 18, fans knew something was afoot. As such, this snake tweet seems to confirm suspicions that Swift is about to release new music.

You see, we're in a post-Lemonade era where every artist has had to step up their game, and there's no guarantee that we're getting anything as straightforward as a new album (as opposed to video album, incredible VMA performance, livestream, or public collaboration with a former enemy). And, yes, the blurry, mysterious footage feels eerily similar to Beyoncé's own marketing for Lemonade. So, brace yourselves. There's every chance that we could be getting a new, experimental version of the "Shake It Off" singer. In any case, expect the unexpected with the following theories.