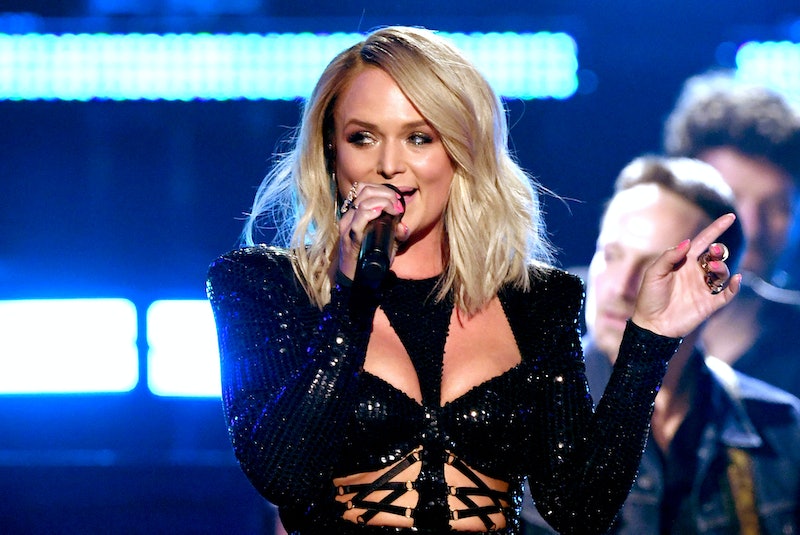 The relationship between Miranda Lambert and Blake Shelton has been a rollercoaster to say the least. The country stars were together for almost a decade before divorcing in 2015, and both of their post-divorce relationships have been tabloid fodder ever since. And if fans’ theories are correct, it looks like Lambert and Shelton still have some drama going on. Fans think Miranda Lambert dissed Blake Shelton at the Academy of Country Music Awards on Sunday, April 7, and if true, the shade was pretty brutal.

At the 2019 ACM Awards, Lambert took the stage to perform a medley of some of her biggest hits, including the fierce “Little Red Wagon." The lyrics to the 2014 single usually go, “Oh, you only love me for my big sun glasses/And my Tony Lomas/I live in Oklahoma.” During her performance, however, she sang “I got the hell out of Oklahoma” instead. Oklahoma is Shelton’s home state, and is where he resided with Lambert during their marriage.

What makes the (potential) diss even juicier is that Shelton was also in attendance at the show with his current beau, perennially cool No Doubt frontwoman Gwen Stefani. Although they would have presumably been in their seats, the couple’s reactions were not shown on camera. That said, it could be that Shelton didn't really have any reaction to the switch, as this isn't the first time Lambert has changed the lyrics to this particular track. A video from a 2018 concert, reported by Her Campus, show the country star singing those same lyrics — "I got the hell out of Oklahoma."

Following the show, fans had very mixed reactions on social media to Lambert’s perceived shade at her ex-husband. Some fans relished in the drama, calling her a “queen”.

Other fans, however, reacted very negatively and chastised Lambert for not keeping the peace between the two country artists and seemingly dissing the state of Oklahoma.

Following their divorce, Shelton started dating Stefani, whom he met when they served as coaches on The Voice together. The couple also spends a lot of time in Oklahoma. Meanwhile, Lambert recently made headlines by announcing that she married Brendan McLaughlin on Valentine's Day, referring to him as "the love of my life". The newlyweds made their red carpet debut at the ACM Awards last night, making the reported shade that much sweeter.

While neither Lambert nor Shelton have publicly talked extensively about each other following their split, their few words have been respectful, and more about themselves than their former spouses. In an interview with Hits Daily Double from July of 2018, Lambert opened up about why she refused to do interviews promoting her last album The Weight Of These Wings, which heavily touched on her divorce. The artist attributed her decision to reporters asking questions about Shelton and his current girlfriend rather than focusing on the music.

“When the music was out, people had listened, I got on the phone for the first interview. First question was, ‘How do you feel about Gwen?’,” she said. “I hung up. I told [her manager] Marion, I just can’t do this. What was in the music was real, and I wanted people to get it from that. Take from it what they would. Then if I needed to talk, I would.”

Given her hesitance to speak ill of her ex in the press, it seems likely that this lyric change at the ACM Awards was simply Lambert's way of updating the song to reflect her current situation. Both Shelton and Lambert have moved on in their personal lives, and maybe that's all there is to it.