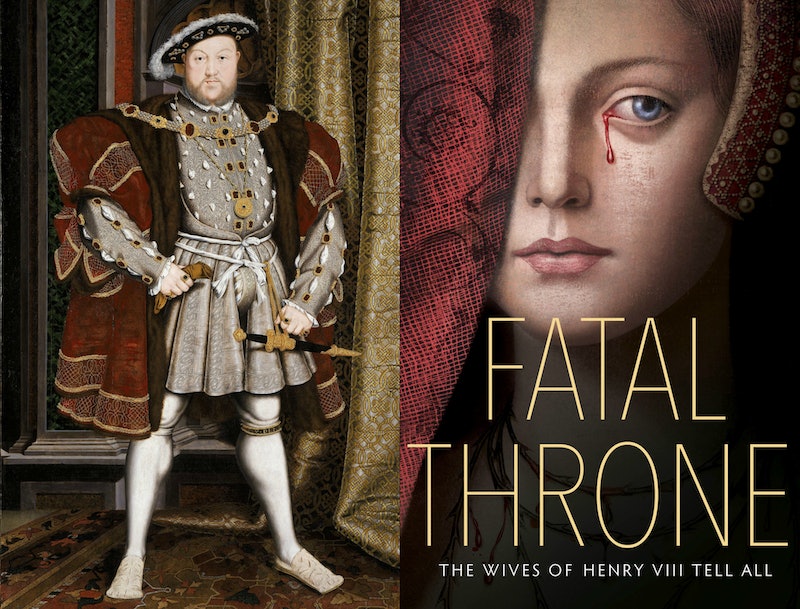 I think you'll agree that Henry VIII is one of the most fascinating figures in history... and for good reason. The charismatic and controversial ruler was known for his extravagance, his obsession with power and, perhaps most of all, his desire to produce a male heir. The latter led him to a grand total of six wives, six queens, each bound for divorce, beheading, or death. It is these women — Katharine of Aragon, Anne Boleyn, Jane Seymour, Anne of Cleves, Catherine Howard, and Kateryn Parr — who most often come to mind when we think of Henry VIII; a sort of morbid vindication for their very ill-fated lives. And now Candace Fleming has assembled an incredible team of authors to tackle their stories in the upcoming historical fiction novel Fatal Throne: The Wives of Henry VIII Tell All.

Readers will watch spellbound as each of Henry’s wives attempts to survive their unpredictable king and his power-hungry court. See the sword flash as fiery Anne Boleyn is beheaded for adultery. Follow Jane Seymour as she rises from bullied court maiden to beloved queen, only to die after giving birth. Feel Catherine Howard’s terror as old lovers resurface and whisper vicious rumors to Henry’s influential advisors. Experience the heartache of mothers as they lose son after son, heir after heir.

Told in stirring first-person accounts, Fatal Throne is at once provocative and heartbreaking, an epic tale that is also an intimate look at royalty during one of the most perilous, and famous, times in English history. And the intriguing story has a gorgeous cover to match, which Bustle is thrilled to reveal below.

That intricate plot and beautiful cover was probably already more than enough to hook you, but you might want to take a seat because haven't even heard the coolest part yet. You already know Fatal Throne is told in first person perspectives; but even better it's been written by a grand total of seven awesome authors — M.T Anderson, Candace Fleming, Stephanie Hemphill, Lisa Ann Sandell, Jennifer Donnelly, Linda Sue Park, and Deborah Hopkinson — who have taken on Henry VIII and each of his six wives, adding individual voices and distinct personality to each of the characters and their heart-wrenching stories.

It's an ambitious and exciting project that any historical fiction fans will want to add to their TBR lists immediately. Fatal Throne won't be hitting shelves until May 2018, but that just gives you plenty of time to get excited.