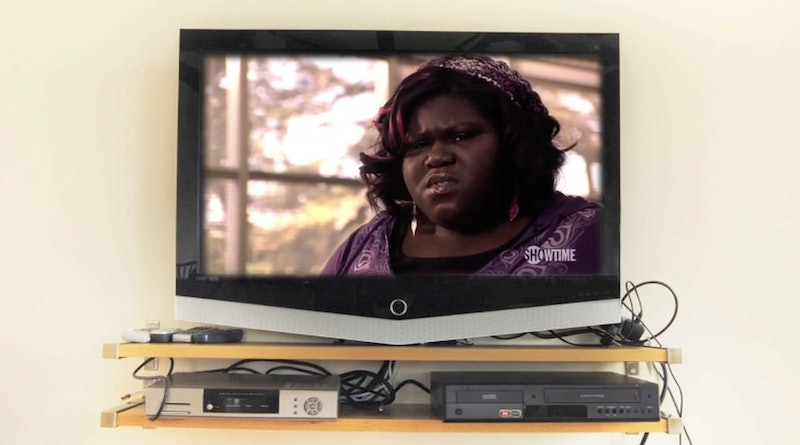 Like it was for so many advocates of size acceptance, the premiere of the new documentary Fattitude has been on writer and plus size style blogger Alysse Dalessandro's mind for years. "I think as a society, we view the mistreatment of fat people as normal," she tells Bustle. "A movie like this helps to show what we as fat people face in our society and [...] will be a great starting point for a much needed discussion on the treatment of fat people." Made by Lindsey Averill and Viridiana Lieberman, Fattitude, out in November, is the first film to tackle the intricacies of weight bias in American culture: the ways fatphobia manifests in every form of media, in fashion, in healthcare, at work, and, well, in day-to-day life.

For body positive and fat positive activists, Fattitude will be an opportunity to nod in warm agreement while spotting friends and inspirations. Marilyn Wann, whose zine and book Fat, SO? shook up the '90s and continues to make waves today, appears alongside Dr. Linda Bacon, one of the world's leading experts on Health At Every Size. Author and poet Sonya Renee Taylor, meanwhile, guides viewers through the intersection of weight and class, while writer and editor Lindy West examines just how effed up it was when Scooby Doo's Daphne (whose character arc revolves around her beauty) was cursed with an expanding waistline.

Then there are Dianne Budd, M.D., board certified in endocrinology and metabolism, and Claire Mysko, Chief Executive Officer of the National Eating Disorder Association, who point out the hypocrisy of a medical field that labels restrictive eating, obsessive calorie-counting, and exercise addiction as characteristics of a disease if they affect thin individuals, but prescribes the same toxic practices to fat ones. As Dalessandro points out, Fattitude has the potential to serve as a starting point for so many important conversations, for fat positive activists and other viewers alike. It's why, when the time comes for the doc's Nov. 2 screening in Brooklyn, NY, the filmmakers tell Bustle they hope that folks of all sizes find themselves in the audience — and walk away with a little more understanding as to why fat shaming isn't just a problem for fat people.

After all, we live in a time during which 10-year-olds are more afraid of getting fat than of getting cancer, as Upworthy reports. They're even more afraid of it than they are of losing both their parents. "The messaging from media affects all sizes," co-director Lieberman tells Bustle. "Whether it’s igniting fear of becoming fat or teaching fat people they are secondary, we are all suffering."

Despite this suffering, however, many of us continue to perpetuate fatphobia. We keep sharing scaremongering studies on the risks of obesity (even when they are unethically funded by weight loss companies). We keep berating ourselves when we eat a "bad" food versus a "good" one. We keep hurting actual fat people, and working against those who advocate for them. Lieberman and Averill have been working on Fattitude for years, for instance, and they've been met with resistance at every point. Averill, who says she has been terrorized, doxed, and sent death threats, has even written about her experiences with harassment since first Kickstarting for the project.

Lieberman, meanwhile feels the resistance comes from a place of fear. "Fear that has been curated by the media for decades. This is systemic and it is deep. It will take time to break our instinctive cycles of shaming ourselves and others without realizing what we’re doing."

"For some, Fattitude will immediately unlock something inside of them sending them on a journey to body acceptance," she adds. "For others, it will plant a seed that can grow over time as they start building the skills and strength to differentiate what the world is telling them and what they feel and know about themselves."

Although the subjects explored in Fattitude are ones that fat activists will be well-versed in, the beauty of the film is that it makes for an approachable and accessible introduction to our cultural relationship with weight for everyone. When discussing the intersection of fatness and health, for example — a topic that can easily breed high emotions on both sides of any argument — medical experts like Dr. Bacon and Budd offer critical analysis using language that should hopefully hit home for anyone watching. They ask the questions we all need to be asking ourselves, easing viewers into a place where they might just interrogate their own beliefs or prejudices.

The introductory segments of the film, which focus largely on fat shaming in media like TV and film, are also incredibly impactful. Considering that the human brain processes images 60 thousand times faster than text, seeing back-to-back footage that depicts how fat people are treated (and mistreated) onscreen has the potential to stick in a lot of people's minds — and there are countless examples.

As Lindy West points out, it can sometimes feel like fat women are portrayed only as sex pigs (see Miss Piggy) or sea witches (see Ursula). Whether it's Fat Monica's entire narrative on Friends or any number of Melissa McCarthy's earlier roles, fat people are often around onscreen simply to be made a mockery of. This is sh*t we all need to contemplate, so that we can all clap back against it, and Fattitude offers what feels like hundreds, if not thousands, of clips and screen shots and scenes, each helping us do just that.

Not everyone will come away from Fattitude wanting to fight ingrained sociocultural discrimination, of course. And the filmmakers don't expect them to. What Lieberman does hope is that viewers will at least come away with the knowledge (or at least the first hint of knowledge) that their bodies are not a problem to be solved. "Your body offers so many incredible things just the way it is," she says. "There is nothing more liberating than loving yourself wholeheartedly. It’s infectious."

"Being in the room with these incredible folks in our film unlocked something inside of me, freeing me to fearlessly dream again," she continues. "To walk through the world confident in knowing myself. Lindsey and I always say it's like unplugging from The Matrix. You see it everywhere. I hope Fattitude offers the tools to acknowledge and combat outside messages, encouraging you to be proud of your own body and your own truth."

Tons of plus size folks are already geared up for the doc's premiere, certain that seeing their experiences validated (and their identities ultimately defended) on the big screen will be life-changing — in ways both good and bad. "To say that [Fattitude's] existence is revolutionary is an understatement," plus size model and influencer Natalie Hage tells Bustle. "In a small way, it makes me feel vulnerable as a fat person [...] It opens up and shows our wounds to those who most likely do not experience these kinds of hatred in their daily lives. It’s like opening up your skeletons in your closet for the world to see."

Regardless of any concerns she has, however, Hage feels this film has the potential to open a dialogue in ways that fat acceptance activism hasn't yet been able to. It's a dialogue she feels is "more than necessary," she says, adding, "Unfortunately, I think that the world as a whole doesn’t really believe us when we talk about our experiences navigating fatphobia. Or worse, they believe that we deserve it."

Fattitude has all the potential to be the thing that makes some of those people reevaluate their disdain, perhaps even shaking up now-mainstream and often meaningless conversations about "body positivity." "By the end of our first cut, I immediately wanted the film to zap into every screen in every room that instant, because there are solutions," Lieberman says. "We [have] gathered incredible people to guide you to them." And with that guidance will, hopefully, come real, tangible change.

More like this
I Tried Kendall Jenner's No-Pants Look As A Plus-Size Woman
By Sarah Chiwaya
Jameela Jamil Defends Sam Smith After Trolls Body-Shamed Them
By Jake Viswanath
Pamela Anderson Is Still A Hopeless Romantic
By Ilana Kaplan
'Knock At The Cabin' May Start Streaming Sooner Than You’d Think
By Jake Viswanath
Get Even More From Bustle — Sign Up For The Newsletter
From hair trends to relationship advice, our daily newsletter has everything you need to sound like a person who’s on TikTok, even if you aren’t.