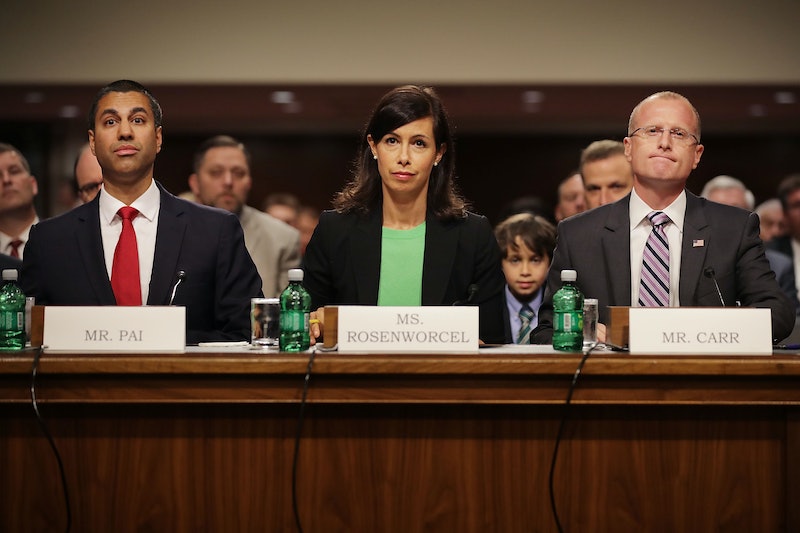 Farewell, net neutrality. The day marking the end of open internet protections is here, despite several efforts by lawmakers, tech companies, and members of the public to put it back in place. On the day it officially came to a halt, the only female FCC commissioner Jessica Rosenworcel released a net neutrality statement expressing her disappointment, though she made it clear that the fight is far from over.

Last year, I voted against the FCC’s decision to roll back our net neutrality rules. Today, the FCC’s misguided repeal of net neutrality goes into effect. This is bad news for all of us who rely on an open internet for so many facets of civic and commercial life. Internet service providers now have the power to block websites, throttle services, and censor online content. They will have the right to discriminate and favor the internet traffic of those companies with whom they have pay-for-play arrangements and the right to consign all others to a slow and bumpy road. Plain and simple, thanks to the FCC’s roll back of net neutrality, internet providers have the legal green light, the technical ability, and business incentive to discriminate and manipulate what we see, read, and learn online.

If the arc of history is long, we are going to bend this toward a more just outcome. The momentum around the country—from small towns to big cities, from state houses to court houses, from governors’ executive actions to action in Congress—is proof the American people are not done fighting for an open internet. I’m proud to stand with them in that fight. We won’t stop today. It’s too important and our future depends on it.

Rosenworcel has been a fierce advocate for net neutrality. She even penned a 2017 op-ed in The Los Angeles Times urging the public to voice their dissent against the repeal. She's called the plan to dismantle net neutrality "a lousy idea" and has described the rules as an "incredible engine for entrepreneurship" and "a revolutionary platform for democratic communication."

On top of that, she's been a fearless critic of Republican FCC Chairman Ajit Pai from the start, calling out a few of his policies in an interview with CNET a few months after she was confirmed by the Senate in 2017. She has also spent a chunk of 2018 giving talks about the importance and democratic necessity of net neutrality.

The countdown to Monday's repeal started in December 2017, when the Republican-majority FCC voted along party lines to repeal net neutrality. These Obama-era rules were put in place to prevent internet providers from messing with access to certain websites. The concern over losing net neutrality rules is that it could hurt free speech or manipulate a person's access to information.

For example, the telecommunications company that you buy your internet from could potentially give you faster streaming abilities to Netflix because the two companies have a business agreement while slowing down your access to Amazon Video because those two don't have one. The end of the regulations may also make it more difficult for startups or the next wave of online services to compete if they have to pay extra fees in order to get into the so-called internet fast lane. But not everyone agrees net neutrality rules were a good thing for the American people.

"Now, on June 11, these unnecessary and harmful internet regulations will be repealed and the bipartisan, light-touch approach that served the online world well for nearly 20 years will be restored," Pai said in a statement, according to CNN.

Of course, to soothe the public, major telecommunications companies like AT&T, Comcast, and Verizon have said they would not choke off internet access or charge more for speedier content delivery, The Washington Post reported.

“We’re all going to wake up on Monday, and we’re all going to be able to stream cool shows off Netflix or Hulu or YouTube,” said Jonathan Spalter, the leader of a telecom industry trade group, USTelecom, to The Washington Post. Spalter went on to say that internet providers had been “unfairly and inappropriately the target of this angst or fear.”

Though net neutrality rules are gone, the future is not set. A number of states are passing their own net neutrality protections, and as Rosenworcel has vowed, the fight for a fair internet still rages on.