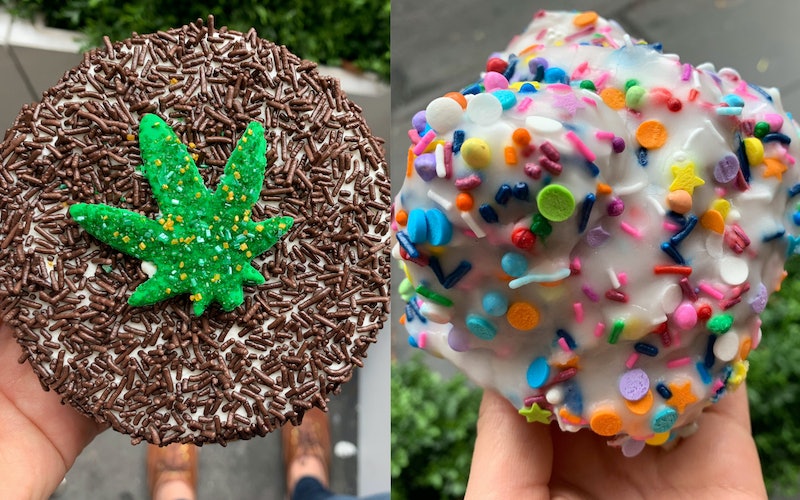 Well, friends, we found it: the one thing that checks all the millennial boxes. It's dessert, it's Instagram bait, and it's CBD-infused — it's Feelz by CHLOE., and it's boldly going where very few bakeries have gone before. Starting on Sept. 27, the Greenwich Village and Seaport District locations of the fast-casual vegan chain will start selling the new line of products, which are as vast as they are delicious, including everything from cinnamon rolls to whoopie pies, granola to rice krispy treats, beverages to actual CBD oil.

True stans of by CHLOE. know that this isn't the first time they've dabbled in CBD-infused treats — its CBD-infused brownie, The Daily Hit, debuted in April. But this new line hits by CHLOE. thanks to a collab with Toast CBD oil, which is infused in all of the food goods in the line. And to mark the occasion, the two locations that will be serving the line are decked out in glitzy, '70s-inspired decor from top to bottom, making it a true Insta paradise. Be warned, though — these pop-ups will only last two weeks, so go catch the vibe while you can. Fortunately, after that, by CHLOE. will be releasing select Feelz items in locations across the U.S.

“I am a big believer in the benefits of CBD and the potential of this ever-expanding industry. After seeing the overwhelming positive response we received from the Daily Hit Brownie earlier this year, I was inspired to create a full line of CBD-infused sweets for our by CHLOE. customers," said Samantha Wasser, co-founder and creative director of by CHLOE., in a press release.

While the line includes 25 newly-curated items for sale, Bustle had the opportunity to go to the Greenwich Village location and try a select few desserts. Here are the five items we sampled (read: destroyed in a conference room with plastic forks), and what we thought.

This was the Salty Peanutty Buttery Piey, an adorable name that somehow still does not do the deliciousness of this justice. That peanut butter topping is hiding a vast well of rich, ganache-y chocolate that melts in your mouth. There are several other arguably more Instagrammable pies in this lineup that we did not try, but taste-wise, this was a massive hit.

The Pinkey Treaty, a colorful rice krispy treat, had a subtle fruity flavor, and was also downright adorable. The line features a ton of similar boppin' rainbow treats in this same psychedelic style that are just as easy on the eyes as they are on the mouth.

The Chocolatey Sprinkley Cakey features a design similar to the iconic brownie, The Daily Hit, that debuted in the spring; it is a perfect basic for anyone who knows they love a good chocolate cake, and maybe wants to ~dabble~ in the CBD-infused treat line before diving into the more creative desserts.

This Rainbowey Ooey Gooey Cinnamoney Roll sits in your hand like a rock, and I mean that in the most delicious, glorious way. The amount of butter and frosting in this is straight up holy, and you know from the instant you start to pull it apart that you are going to need a STRONG nap following its consumption, and it will be the most satisfying nap your brain ever had.

The Sparkley Whoopie Piez are a cake-y daydream with fluffy frosting that is, as you can see, SLATHERED in edible glitter. It is a testament to how much of a messy eater I am that I am still finding pieces of it on my arms the day after eating it, but well worth it.

The real question, of course, isn't so much how we felt eating them, but how we felt after, considering the CBD infusion. I felt a bit calmer afterward, and slept like a rock later that night; another lifestyle editor said the she experienced the same thing; another lifestyle editor said she just felt like she ate good dessert, but didn't feel much of a difference body or mood-wise.

The by CHLOE. pop-up locations running for the next two weeks will also feature a CBD boutique, courtesy of Charlotte Palermino and Marta Freedman, the co-founders of Nice Paper, who curated the selection of chapsticks, lotions, body butter, and other CBD-infused items for sale. Now you can eat your CBD, and have it, too! Just make sure to hit the pop-up locations while you still can — they're a gorgeous, trippy sight to behold.