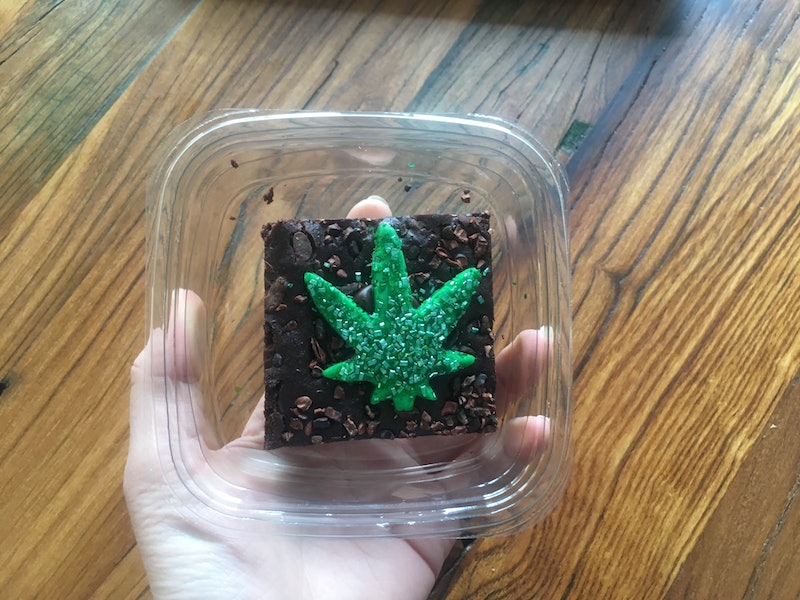 As you are all well aware, today is a particularly iconic day for a certain group of people whose interests happen to converge in a highly-specific way. That's right — it's my third anniversary of working full-time at Bustle! Okay, that, and, obviously, it's 4/20. And in celebration of 4/20, a day devoted to all things cannabis-related, the plant-based restaurant by CHLOE. and CAP Beauty have partnered up to create a vegan, CBD-infused brownie called The Daily Hit, which will be available in by CHLOE.'s Bleecker Street location in New York City from Friday, April 20 through Sunday, April 22.

The Daily Hit was given its namesake from the cannabidiol (CBD) that it's infused with, also called The Daily Hit, which comes courtesy of CAP Beauty. If you're unfamiliar with CBD, it is one of the compounds found in the cannabis sativa plant, the same plant used to make marijuana and hemp. Unlike marijuana, though, CBD oil is not psychoactive — meaning, it doesn't produce a mind-altering "high" when you consume it, as it contains little to no THC. And unlike marijuana, it's currently legal in 44 states (with some restrictions, varying by state) and Puerto Rico.

Although it doesn't produce a traditional "high," people laud CBD for its anti-inflammatory, potentially anxiety-reducing properties; and while it's typically digested as an oil or in capsule form, as of late, companies like by CHLOE. have been experimenting with combinations like The Daily Hit that make it a little more accessible and fun to people who may not be as familiar with CBD.

“We are so excited to be partnering with CAP Beauty to bring our guests something unlike anything we have done before with The Daily Hit Brownie,” said by CHLOE. Co-Founder Samantha Wasser in a press release. “Our new vegan brownie contains a serving of CBD oil and is a delicious way for guests to try our favorite adaptogen from a brand we admire and love, packed with benefits for your body and mind.”

The Bustle office had a chance to sample by CHLOE.'s brownie offering prior to the April 20 launch — and while the amount of CBD in it is fairly minimal, the brownie itself was rich and chocolate-y and so delicious that, as someone who is neither vegan nor gluten-free, I didn't notice much of a difference between it and a regular brownie. Plus, the little fondant weed leaf on the top is *chef's kiss* levels of adorable.

According to the product description on CAP Beauty's website, the food combo possibilities with their cannabidiol extend far beyond brownies. They suggest topping salads with it, or adding it to soups, smoothies, or tonics. And there's excellent news for those of us living in states where cannibidiol is legal, but a road trip to New York for by CHLOE.'s brownies isn't quite so feasible: CAP Beauty shared their own recipe for "High Times Brownies," also infused with The Daily Hit and conveniently vegan and gluten-free.

Beyond brownies, dessert enthusiasts have plenty else to look into now that the CBD-infused trend seems to be in full swing. For instance, The Standard Hotel will now be offering Lord Jones' CBD-infused gummies in the minibars of their hotel rooms in Los Angeles, New York, and Miami Beach, as well as a CBD-infused lotion (but let's be honest, that is far less delicious and Instagrammable).

In 2017, "Not Pot" Chocolate, a heart-shaped chocolate treat infused with cannibinoids, also caught the internet's eye. Not only is it adorable, but at $30 for a 30-day supply, it may be a more affordable option for people interested in dabbling with CBD-infused products; by comparison, a bottle of "The Daily Hit" is $96. (Granted, at two milligrams of CBD per chocolate heart, "Not Pot" is considered a very light dose.)

In the meantime, those looking to get their fix at by CHLOE.'s Bleecker Street location better hustle — the brownies will be selling for $5 a pop until supplies run out. But who knows? Maybe there will be enough hype that The Daily Hit becomes a permanent one, and you'll be able to enjoy adorable CBD-infused brownies all year round.

More like this
10 Pumpkin Recipes That Are Way More Creative Than Pie & Lattes
By Rebecca Deczynski and Alexis Morillo
On TikTok, Tinned Fish Date Night Is The Latest Viral Food Obsession
By Emma Carey
12 Easy Halloween Costumes You Can Wear With A Denim Jacket
By Kirsten Nunez and Bustle Editors
17 Halloween Costumes That Are Literally Just Pajamas
By Jessica Booth
Get Even More From Bustle — Sign Up For The Newsletter