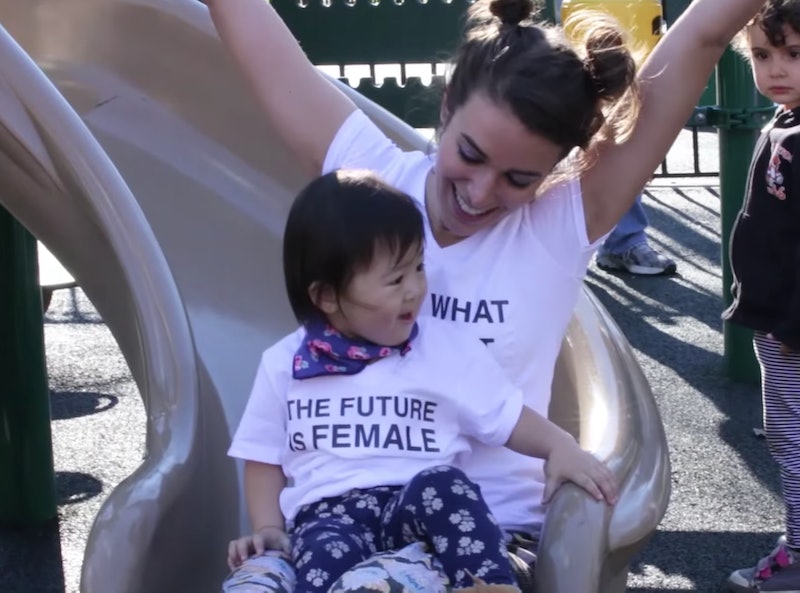 Saying you’re a feminist is (weirdly) a little like saying you like Nickelback: It’s going to be more polarizing than you expect it to be, and people are going to make some pretty broad assumptions about you. These assumptions about feminism form the crux of the web series Feminist Babysitter by SJ&GINNY — and when they're portrayed with a sense of humor, the point gets driven home in a poignant, powerful, and (of course) hilarious way.

You may know comedy duo SJ&GINNY from their web series Quiet Tiny Asian, a video guide to being an Asian woman in America. The series portrays common racist and sexist microaggressions Asian American women hear as “lessons” to be learned. In the series, these microaggressions play out in a sort of rapid-fire format, mirroring what it’s like to be constantly bombarded with these types of comments. The series also functions as a literal portrayal of how the responsibility often lies on marginalized individuals to learn how to cope with these stereotypic statements.

Feminist Babysitter isn't new — the first episode appeared on YouTube in January of 2016 — but it's definitely still relevant. It takes a similar approach as Quiet Tiny Asian does, this time to feminist stereotypes, compiling and condensing them into a five-minute format. The titular character, portrayed by Ginny Leise, can’t stop turning every seemingly mundane babysitting moment into an opportunity to talk about gender inequality. She ends up being the satirical amalgamation of what people imagine a feminist to be. She’s the physical embodiment of a “Things Every Feminist Knows to be True” listicle.

If you’re a feminist, Feminist Babysitter will make you laugh, and cringe, and wonder, “Oh god, is that what I sound like when I talk about intersectionality.” If you’re not a feminist, boy bye.

Check out a few of my favorite "Things Every Feminist Does All The Time OMG This Is Literally Me" below, and make sure to watch the full series for more.

You Can’t Stop Talking About The Wage Gap

The wage gap is real, and if you didn't want me talking to your kids about it, then why did your family sit behind me at this Chili's? Like the series description says, Feminist Babysitter "may not be great at being appropriate. But, hey! nobody's perfect."

You Can’t Stop Checking Everyone’s Privilege (Including Your Own)

This web series also serves as a subtle critique on white feminism. Feminist Babysitter is doing her best to make her babysitting time intersectional.

You Can’t Stop Dismantling The Patriarchy

Shampoo. Makeup. Bath toys. They are all instruments of the patriarchy. Well, maybe not that last one.