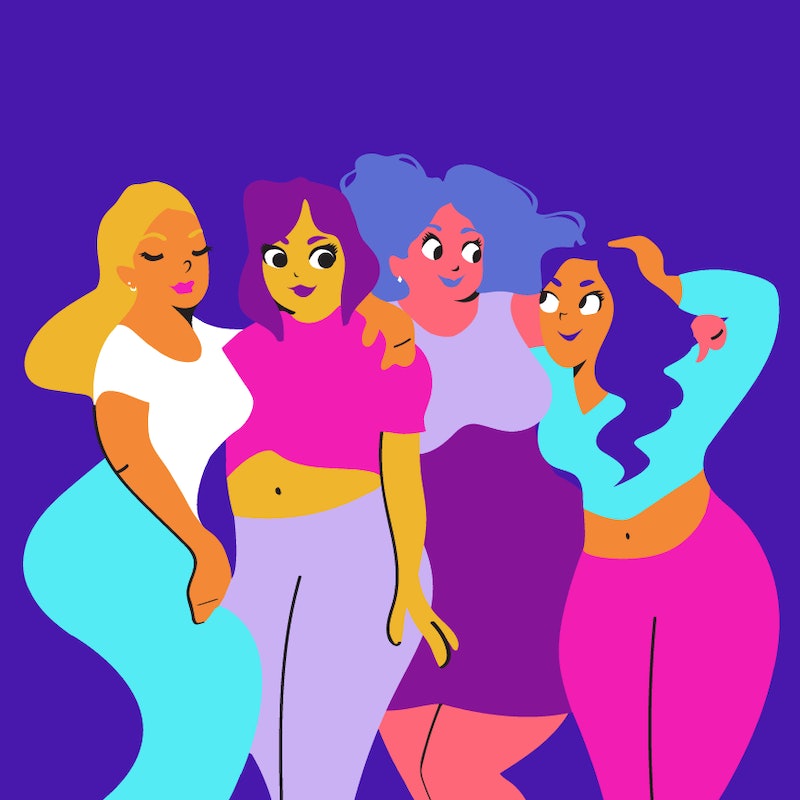 You've probably heard all the popular stereotypes about feminism and feminists: They hate men, they're ugly, they're all lesbians, etc. As more and more people come out as supporters of gender equality, it's becoming more apparent that these myths aren't true. So why do people still believe them?

A recent Sociological Images post by sociologist Lisa Wade brings to light some disturbing statistics: 37 percent of people think "feminist" is a negative term, according to a 2013 YouGov poll, and a 2006 study published in Psychology of Women Quarterly found that "many people think that feminists are ugly, uptight, angry, aggressive, harsh, strident, demanding, dogmatic, man-hating lesbians," Wade writes. These findings may provide fodder for antifeminists to say "people believe these things because they're true," but anyone who has followed American politics should know that a significant chunk of the American population's belief in something does not make it true.

As someone who writes and talks about feminism and encounters a lot of critics, this is something I've thought about a lot. Could feminism really be the hateful movement some have made it out to be? Or are there other reasons people discredit feminism that have very little to do with feminists themselves? I've come to the conclusion that it's the latter. Here are some reasons people believe stereotypes about feminism that have nothing to do with their truth value.

At Sociological Images, Wade shares propaganda posters used against the women's suffrage movement that depict suffragettes as ugly, manly, and angry. For a modern-day example, look to the poster above, which the men's rights group A Voice for Men placed in a subway station in Toronto. Like the early anti-suffrage propaganda, this sign uses feminism as a scapegoat, in this case for individual and societal problems like high cost of living and difficulty with dating. Some people don't understand feminism because they've only been taught these negative messages about feminists and haven't had a chance to learn what they really believe.

2. They Don't Want To Give Up Their Privilege

Male privilege is a pretty sweet deal. You get to make a full year's rent more than women annually, rise to the top of your company more easily, be better represented in your government, walk down the street without being sexually harassed for the most part, feel fairly confident that you can attend a party without getting raped, and go online without facing quite as high a volume of harassment and rape threats. Men will retain some of these privileges even with greater gender equality, but not all. More seats in Congress for women means fewer left for men. More women hired in STEM jobs means fewer men. Some men and other members of dominant groups view movements for equality negatively because they do not want to lose their current advantages.

3. They Don't Want To Give Up Tradition

People get attached to the sense of belonging and order that traditional gender roles give them. When men and women play complimentary roles, nobody has to think about what role to play in any given situation. Men feel useful because they are needed to provide for women. In addition, in a world where everyone adheres to gender roles, it's safe to make assumptions about people, and you automatically have things in common with someone of your gender. When you view feminists as the disruptors of traditions that you hold near and dear to your heart, they can look like a rather hostile group.

The need that many men (or, should I say, #notallmen) feel to assert that not all men are in fact oppressing women stems from a misconception about feminism. If feminism were about calling out the independent choices of individual men, there would be no need for a movement. People would just address these men individually. Feminism is attacking patriarchy, which oppresses men and women and is perpetuated by everyone. Sometimes, it can manifest in men's behavior, since men have been taught to dominate and disregard women. But feminists view this behavior as an instrument of a larger system. Accusing feminists of being "man hating" makes the problem seem smaller than it is. When men or women are responsible for perpetuating sexism, it is necessary for them to hold themselves accountable rather than get defensive, just as it is for white people who perpetuate racism or any group that perpetuates oppression (aka everyone at some point). Some people feel attacked by criticisms of systems of oppression because their identities are tied up in these systems. Feminism invites us all to free ourselves from these constraining identities so that we no longer perpetuators or victims of patriarchy.

When you're a member of a privileged group that doesn't experience oppression and nobody has pointed out others' oppression to you, social justice movements start to look like conspiracy theories. When you don't see sexism, feminism looks like a bunch of women with too much time on their hands making up problems to spite men. When you read more about it and talk to women about their experiences, though, it because clear that feminists' intention is not to antagonize anyone or assert their imagined superiority, but simply to achieve equality.

Sometimes it's really that simple. People don't want to hear about rape culture because deep down, they don't believe women should have sexual autonomy. They don't want women to get equal pay because they believe women are worth less. They'd rather buy into insulting stereotypes about feminists than listen to what feminists have to say. To a misogynist, feminism sounds completely ridiculous. These are women with ideas! And they expect people to listen to these ideas! And they want us to pretend they're as capable as men! The characterization of feminists as stupid and mean is a logical conclusion to misogyny.