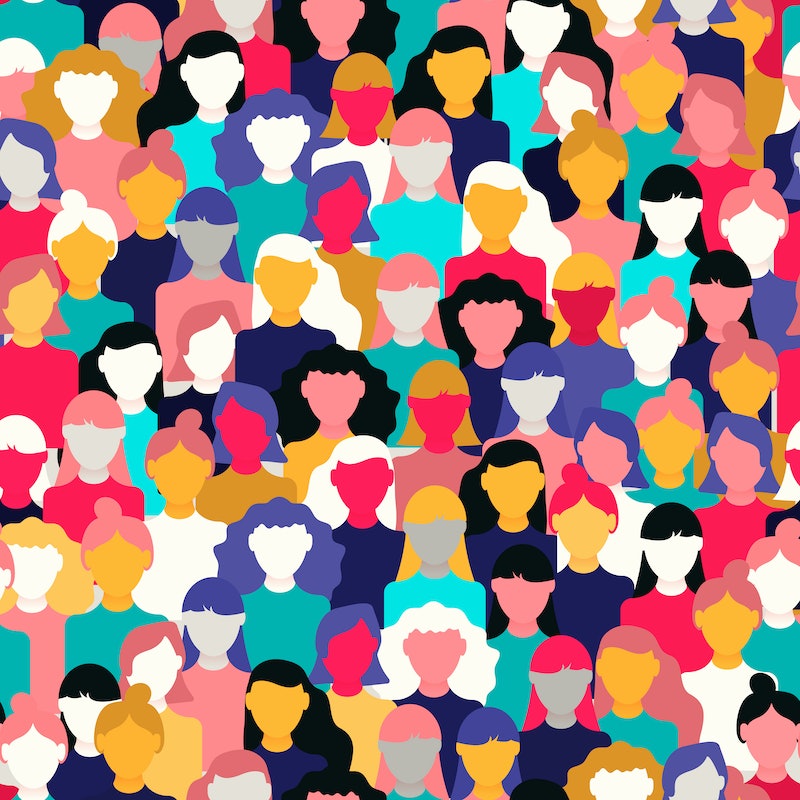 Here at the Bustle Trends Group, we’re constantly taking the temperature of our readers on important issues that inform our content. Recently, our research uncovered a shift in Bustlers’ priorities and in their relationship to the term “feminist” that reveals a lot about our millennial audience.

In 2017, we conducted a study of 1,000 women ages 18-34 within our proprietary online community of readers, the BDG Hive (join here!). We asked about their passions, goals, style, role models, and more, and the results were illuminating.

“Feminist” was the most common adjective women used to describe themselves, with more than one-third of participants (42%) selecting the term. They were also go-getters: “Career” was the number one answer when asked what they’re most passionate about. In addition, nearly half (47%) said “having a fulfilling career” was a sign of a successful life.

When we did the same survey in the U.K. eight months later, we noticed that women across the pond did not identify with the “feminist” label. It didn’t even rank in the top 10 adjectives participants used to describe themselves. They felt that words like “loyal” (34%), “friendly” (32%), and “kind” (28%) more accurately defined them. They also appeared more family-focused than career-focused, as participants were two times more likely to say they feel most successful when they’re with family and friends vs. at work.

This year, we fielded the survey again among some of the same women in the U.S. that took the 2017 survey to see if there were any shifts. We found “feminist” is still the most common word the participants used to describe themselves, but the percentage of women who identified as feminists actually decreased by 16% from 2017. Not only that, but there was a shift in Bustlers’ priorities. When asked what they’re most passionate about, family beat out career for the participants’ number one answer, while career came second.

We hypothesize there are two reasons for this shift: traditional feminism is no longer en vogue, and political fatigue has set in.

When we fielded the first round of the survey, Sheryl Sandburg’s Lean In was a bestseller, millions of women were in disbelief that pantsuit patriot and feminist icon Hillary Clinton did not hold the highest office in the world, and momentum from the first Women’s March was still going strong. It was a badge of honor to proudly wear a “pussy hat” and a shirt with the letters FEMINIST across your chest.

When we fielded the survey again this spring, it was clear the term “feminist” and feminism in general had evolved in the eyes of our readers. It makes sense. The lid blew off the #MeToo movement in 2018, starting new conversations around gender expectations and roles. Women like Supreme Court Justice Ruth Bader Ginsburg (RBG) and seasoned sex and relationships expert, Dr. Ruth, who’ve both spent their lives fighting for women’s rights, have said they don’t identify as “feminists.” And there are now six women running in the Democratic primary race for the chance to go up against Donald Trump in 2020.

Role models for millennial women has changed from two years ago as well. Bustlers still identified Michelle Obama as their favorite person in the 2019 survey. But this year participants also cited women like Rep. Alexandra Ocasio-Cortez (AOC), Ellen Degeneres, and Chrissy Tiegen.

Ellen’s and Chrissy’s popularity among readers over more political figures point to another shift we’ve noticed: political fatigue setting in. Our survey found the number of women who say politics is a personal passion of theirs decreased 35% from 2017 to 2019.

We have yet to see what that means for the 2020 election – and fingers crossed everyone turns out like they did for the 2018 midterms – but our office is sweating this trend a bit.

We’ll make sure to keep updating you on the big trends we’re seeing, but this change in attitude towards the word “feminist” and the shift in life priorities for millennial women is definitely worth noting.

More like this
25 Inspiring Quotes From Black Women To Celebrate Black History Month
By Kyli Rodriguez-Cayro and JR Thorpe
Savannah Guthrie Got Her First-Ever Tattoo With This Former Wild Child
By Suzanne Zuckerman
Here's How Netflix Should Adapt Prince Harry's Memoir Into A Movie
By Ginny Hogan
11 Super Bowl Instagram Captions To Use On Game Day — Even If You Don’t Like Sports
By Alexis Morillo
Get Even More From Bustle — Sign Up For The Newsletter
From hair trends to relationship advice, our daily newsletter has everything you need to sound like a person who’s on TikTok, even if you aren’t.