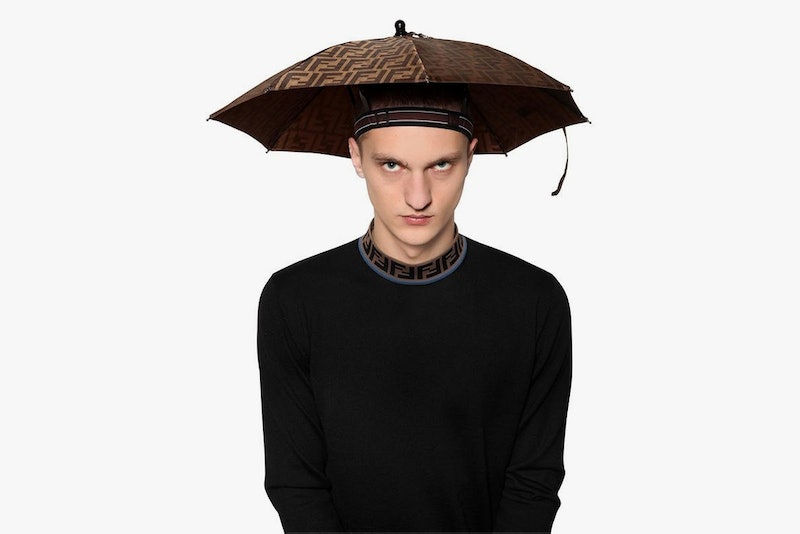 When it comes to ugly-chic fashion, a person can't laugh at seemingly kitschy styles anymore because they have all become staples in our wardrobes. Just look at how mom jeans, dad sneakers, and fanny packs turned out. And now umbrella hats might be going down the same path. Fendi has a logo print umbrella hat, and it might just become the new fashion "it" accessory if we're not too careful.

Once the no-hands tool of five-year-olds at parades and grandparents wandering Disney World in plastic poncho coats, the Italian label has now reworked it to spell luxury. The brand debuted the monogrammed hat at the Milan autumn/winter '18 men’s fashion show, where they turned their runway into an airport, complete with a departures board, "Nothing to Declare" backdrop, and a baggage claim carousel stacked with unclaimed vintage Fendi suitcases, presumably from their archives. Some models even walked down the runway pushing trolleys with aluminum case suitcases stacked on top, bound with Pequin-striped bands in the iconic Fendi colors.

Not many people think "luxury" when they think of the airport — especially considering how the majority of us dress when it comes to being cooped up in a plane for several hours — so it was an interesting concept to contrast the high-fashion label with.

But it turns out that the concept wasn't so random after all, and was a thought-out and nostalgic attempt to bring Fendi back to its roots. Silvia Venturini Fendi, the creative director, had a mood board backstage that captured the show's inspiration, and one of the photos pinned to the wall was a picture from 1925 of her family's first Fendi store, which opened in Rome. There was a sign in the window that read, "Luggage, trunks, umbrellas."

"It was about returning to these items and seeing what's changed in almost one hundred years," Fendi said to i-D.

And that's where the inspiration for the umbrella hat hit. Fendi is still selling umbrellas like they did nearly a hundred years ago, but in a completely new way.

The entire runway collection was designed with the airport in mind, where each piece had multi-purposes (letting you pack less,) and was made to keep you comfortable while waiting at gates and killing time in between layovers. And after losing one too many umbrellas during her travels, Fendi decided to create one that you can just put on your head. If you're wearing it like a hat, surely you can't lose it, right?

This easy, hands-free concept was seen in the sleek raincoat anoraks marching down the runway, too, where the label covered all off a jet setter's bases when it came to never losing another umbrella again.

While it might seem like a questionable sartorial move to some at first glance, you can see the potential in it. You'll be the driest person at a festival if you have one of these banded hats on, and you'll never have to juggle your coffee, cell phone, and umbrella again if you're walking to work on a drizzling day.

Just like how we originally scoffed at the return of the baggy-butt mom jeans and Jerry-Seinfeld-inspired dad sneakers, the umbrella headband has the potential to become the new bum bag of 2018.

Though you might have to wait until more affordable retailers pick the idea up, seeing how Fendi's luxury accessory comes with a luxury price. Right now the umbrella hat retails for $390 and can be pre-ordered at Luisaviaroma.

With summer in full-swing and festival season underway, keep an eye out to see if some of your favorite stores start copying this. And if they do, remember it started on Fendi's "Departures" runway.