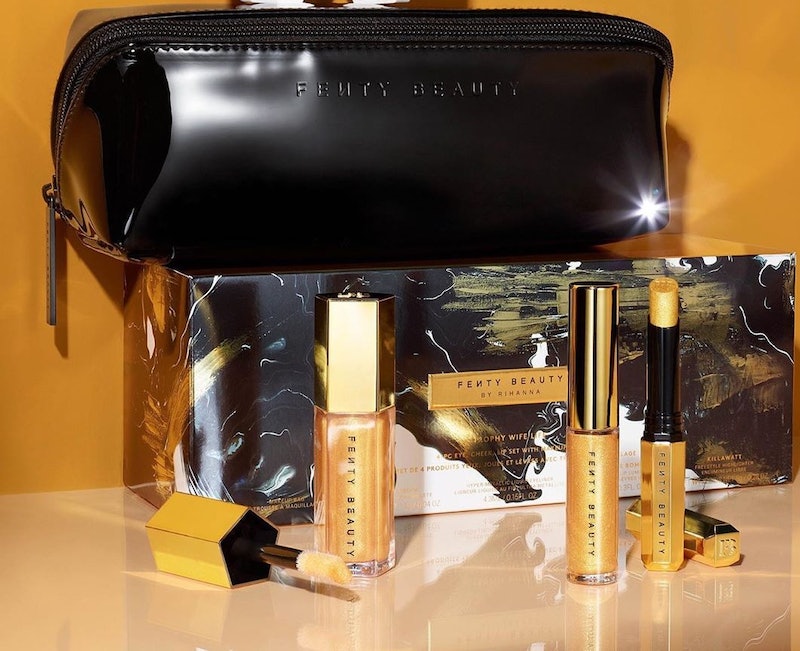 Fenty Beauty fans, rejoice — the brand's ultra glamorous, cult-favorite highlighter is getting its very own collection, just in time for the festive holiday season. On Nov. 19, Fenty Beauty announced its new Trophy Wife collection on its Instagram account. According to the post, the brand has created three limited-edition holiday items inspired by its fan-favorite golden highlighter. Inside the collection, Fenty shoppers will find the iconic Killawatt highlighter alongside a new Gloss Bomb shade, liquid eyeliner, and lipstick, all inspired by its golden hue. All four items are full-sized and will be sold in a bundle that includes a patent leather makeup bag.

The kit will retail for $69 according to the brand's website, and it's launching way sooner than you may have thought. You'll be able to get your hands on the Fenty Trophy Wife Collection beginning Nov. 22 online at both the Fenty website and Sephora. If you want to check it out in person first, you'll be able to shop in-store at Sephora beginning Dec. 6.

Trophy Wife has been a staple in the brand's lineup since its launch back in Sept. 2017. The vibrant gold pressed powder stood out amongst its dual-sided counterparts and its paler sister Metal Moon. Plus, it's marked as one of Rihanna's personal favorites on the brand's website, and if that weren't enough, Trophy Wife has already seen a multitude of different iterations.

For her 30th birthday, Rihanna chose Trophy Wife as her celebratory shade. Fenty Beauty launched the Dirty Thirty Trophy Wife highlighter back in February 2018 for the occasion. While the shade was the same glowing gold of the original, the limited edition version featured three X roman numerals stamped in the center to honor the founder's big day.

Fenty Beauty didn't stop there. Trophy Wife first moved beyond its pressed powder formulation earlier this year. In March, Rihanna's Body Lava came back for spring and summer, and it came back with a new shade, Trophy Wife. The golden, shimmering body oil launched alongside the existing shades of Brown Sugar and Who Needs Clothes. The body luminizer in Trophy Wife is actually still available at Sephora.

Now, thanks to the Trophy Wife collection, there are even more new formulations of Rihanna's favorite shade. With an eyeliner, lip gloss, and lipstick all coming at fans, get ready to have the perfect golden glow for the holidays.