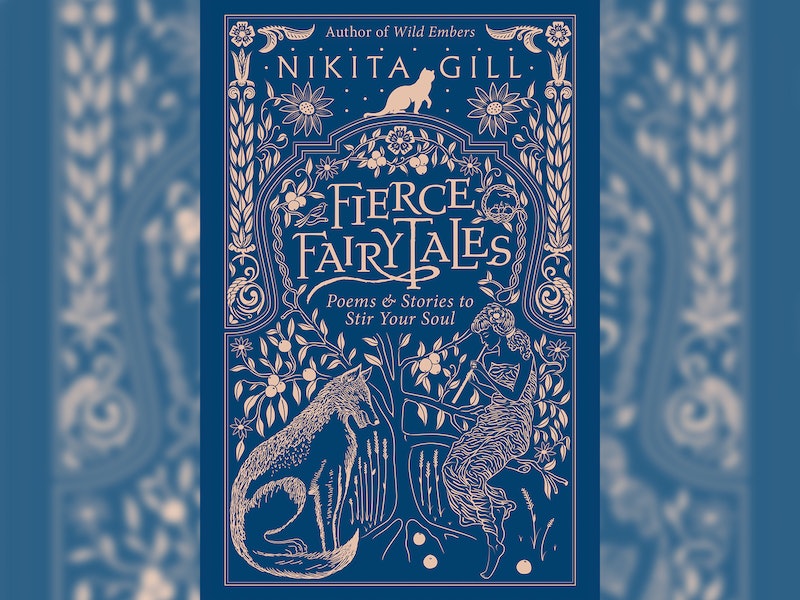 What if Little Red Riding Hood actually became ruler of the wolves, instead of being eaten by one? What if Rapunzel used her braid to climb down the tower herself, instead of lowering it for the prince to rescue her? What if Snow White and Sleeping Beauty woke themselves up? What if Captain Hook wasn’t actually evil, but just heartbroken? What if Lady Tremaine was really just a struggling single mother? What if every fairytale you’ve ever heard has been told to you all wrong? Where are the stories for the wicked girls?

These are the questions that writer and poet Nikita Gill asks in her newest collection, Fierce Fairytales: Poems & Stories to Stir Your Soul, out from Hachette Books on Sept. 11 — a collection of poems and flash fiction that take classic fairytales: Cinderella, Snow White, Peter Pan, The Little Mermaid, and more, and turn them completely on their heads. In Fierce Fairytales, Little Red Riding Hood transforms into an Alpha wolf-environmentalist, saving the forest from violent woodcutters. The classic Cinderella story becomes an anthem to self-empowerment and an exploration into the challenges of single motherhood. Ursula the sea witch is the jilted lover of King Trident, the victim of a forever-broken heart. Self-involved bad guy Gaston is the product of a society that doesn’t make space for vulnerable men. Captain Hook is suffering the abandonment of the only friend he ever knew. It’s a collection that celebrates witches and old crones, mothers and stepmothers, the men who play the villains to fiction’s dashing princes, the princesses who save themselves. It blurs the lines between good gals (and guys) and bad, questions the utility of goodness, and subverts the clichés and gendered stereotypes of the most recognized of fairytales — leaving readers to consider the characters whose stories aren’t being told.

“We have all taken turns / being Red Riding Hood / and we have all been the wolf,” Gill writes.

If you’re not already familiar with Gill, you should be. The British-Indian writer has been called “the voice of the generation” — and with 441,000-and-counting followers on Instagram alone, she just might be. (Ava DuVernay and Cara Delevingne both follow her… just sayin’.) She’s also the author of four books of poetry and prose, including the breakout success Wild Embers — another collection that challenges traditional gender tropes: espousing goddess wisdom and touting body positivity. And now, with Fierce Fairytales, she’s taking on some of the most-recognized stories in literary history.

Just in case you’re not 100% sure what you’re dealing with here, Fierce Fairytales begins with a riff on the creation story of Genesis: the universe is actually built by two women, Cosmos and Chaos, who team up to spark everything into being — leaving no question in a reader’s mind as to what kind of book Fierce Fairytales actually is.

Later, Tinkerbell quits her anger management program, in favor of her “fury [that] gets things done” and “anger [that] has screamed”. In another rewrite, Little Red Riding Hood’s mother searches the woods for her daughter, finally discovering the girl-now-woman draped in a wolf’s skin, wielding twin swords, seated atop a throne in the center of a wolf pack — she is not only the leader of the wolves, but an environmental activist as well, preventing the forest from being hacked to death by the woodcutter and his friends. Another story looks at Cinderella’s wicked stepmother, Lady Tremaine, as a grieving and embattled single mother just trying to survive; and digs deeper into her evil stepsisters as well: “Children aren’t born abusive, it is nurtured in them. Children aren’t born ugly either. They learn to hate themselves from society’s narrow-minded ideas about how they must feel unsatisfied in their own skin,” Gill writes. “…a burden they bore on their little bones till their bodies had no choice but to grow fangs.”

But perhaps most interesting in Gill’s blurring of the lines between classic heroes and villains is what she does with the men of fairytales. Prince Charmings, certainly, she and her leading ladies (aka: women warriors) have little use for. But the other men, the traditionally bad ones — Captain Hook, Gaston, the Mad Hatter — get a second chance at setting their stories straight. Captain Hook is just a young boy when he falls in love with Peter Pan — only to be left behind when Peter abandons him for the land where nobody ever grows up. Gaston is reconsidered as a character whose only chance a love, once lost, is wholly misunderstood. The Mad Hatter is in an abusive, lie-driven relationship that makes him second guess himself and his reality. “No one understands how little boys / who save villages, who become war heroes, / who have fathers that just expect / them to be brave no matter the cost / to the insides of their mind, become / villains without even trying to,” Gill writes.

Gill encourages her characters, and certainly her readers as well, to take back their fairytales. In one of the most striking images in the collection — one that reads like a nod to the Me Too Movement — she encourages Snow White and Sleeping Beauty to be the happily ever afters of their own stories: “Await no princes to save you / through their lips touching yours / whilst you are in unwilling slumber,” Gill writes. “Darkling magic is coursing through those veins, / turn it into kindling, my resourceful girls, / find one another in the fog realm, / wake each other up instead.” Fierce Fairytales will definitely wake readers up.