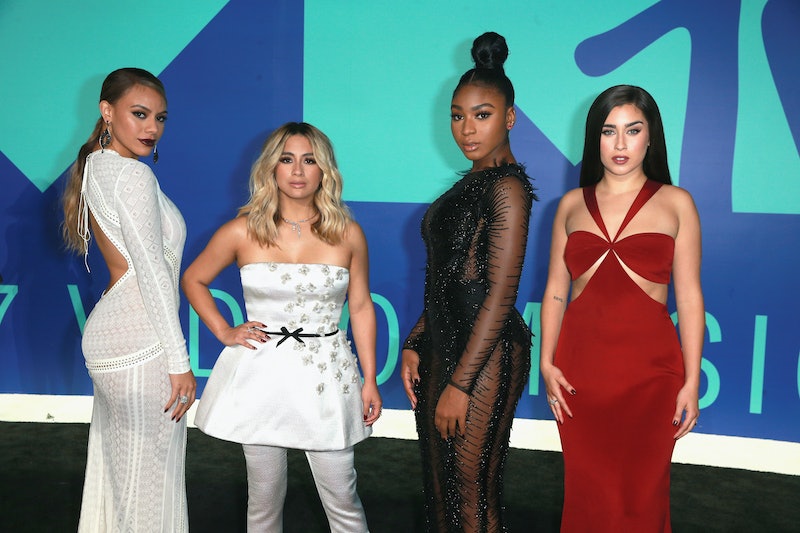 Judging by Fifth Harmony's 2017 VMA red carpet appearance, I think we can officially call it: these ladies are the fiercest girl group around. Wherever they go, they show up in style. And it just keeps getting better.

Take a peak at their looks from the Teen Choice Awards earlier this month, where they rocked sleek, minimalist pastels. With plunging necklines, cropped tops, and wide legs pants — it's clear each singer knows how to play up their own personal style. And that's kind of what I love about their girl group vibes. While they're looks always go together, each member effortlessly puts their own spin on things.

That's been their thing for a while now — wearing unique items, but all in the same color and style palette. But at Sunday night's show, they really switched things up.

Lauren Jauregui was wearing the most stunning red dress, with pretty side cutouts. Dinah Jane rocked a white long-sleeved column gown and a dark lip. Normani Kordei was pure perfection in sparkling black dress with plunging neckline. And Ally Brooke did it up in a short white dress with cropped pants. It was just about as different as you can get, which is a new thing for the girls.

So different, and yet so chic!

I love that they each did their own thing this year.

The group has two nominations for their song Down — best pop video and best choreography — and it's clear they came dressed to take home a trophy or two. Here's hoping they win!