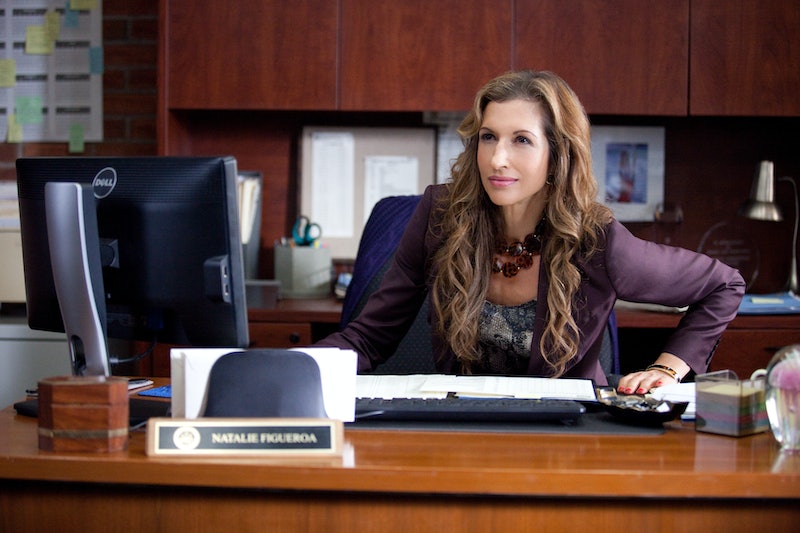 There are major power struggles ahead, and not all of them are between inmates. In Orange Is the New Black Season 6, Fig and Linda's work dynamic is antagonistic, to say the least. But while pitting women against each other in pop culture can set some negative precedents for how women are perceived and how they believe they should behave towards one another, Alysia Reiner, who plays Fig, views this complicated work dynamic on the show as actually quite feminist. Men aren't typically taught to play nice at work, she says, so why should Fig and Linda?

"I think it’s really important that we be free as artists and writers... and not have to go, ‘We need to show women getting along in the workplace and create a good example about that,'" Reiner tells Bustle. A master manipulator with relentless bravado, Fig was never one to be messed with. But once Linda (Beth Dover), formerly the Director of Purchasing for MCC, is finally discovered to have been posing as an inmate, she returns to civilian life out for blood. Not only could Linda be a real threat to Fig and her job, but the two don't necessarily care for one another, either.

Simply seeing two determined women exist in a frame, fighting for power, status, and their jobs is important, too. "In this moment in time, just two women working together, without talking about a man, is really important. You don’t have to like each other, or get along well, or be nice to each other," Reiner says. "We see men working all the time not being very nice to each other. In superhero movies, we don’t go, ‘Wow, why isn’t the Joker nicer to Batman?'"

And speaking of men in the workplace, Fig struggles with someone else this season: Caputo. The two have had a complicated on-and-off relationship that stemmed from work throughout the series. But when Caputo (Nick Sandow) ultimately tries to chip away at Fig's tough exterior this season, it's both suspicious and touching to watch. While Caputo has motives of his own, Fig does let her guard down. But Reiner says audiences shouldn't be fooled by her showing some vulnerability.

"I don’t see her ever being manipulated by him. I think she’s really, really smart," she says. "If you listen to her suggestions for Joe or Linda, she’s a master of manipulation. So I don’t think she’s letting anyone manipulate her. I think we’re all blinded by love sometimes, which is a very different thing."

This, of course, is another issue so many modern women face in the workplace and beyond: When and where is it OK to let your guard down without being taken advantage of? Unlike Fig, Reiner thinks being more vulnerable could be good for her character. "Showing those parts of yourself that you consider ugly and messy and not so together, I, as Alysia, deeply believe in," she says. "Love is a magical, magical thing. I don’t think Fig has ever been truly loved... I think she thinks it’s really important to be strong."

For now, Reiner knows Fig won't suddenly turn into an emotionally available teddy bear. Still, she roots for her to use her manipulation and power for good. "Would she get woke and use all of her conniving, manipulation, brilliant skills to f*ck MCC and be completely awake and actually try to make things better for these women?" she says. "Yeah, that’s my fantasy."

Reiner ends the conversation with hope that Fig can, and should, go for it all. "I hope she learns it’s not all about money and power… the love in my life is truly what it’s all about," Reiner says. "There’s a part of me that hopes she experiences that kind of love that makes you feel that way." If audiences take away anything from Fig's journey this season, it shouldn't be to forge relationships with people you don't necessarily like, but to wholeheartedly embrace those with the ones you do.