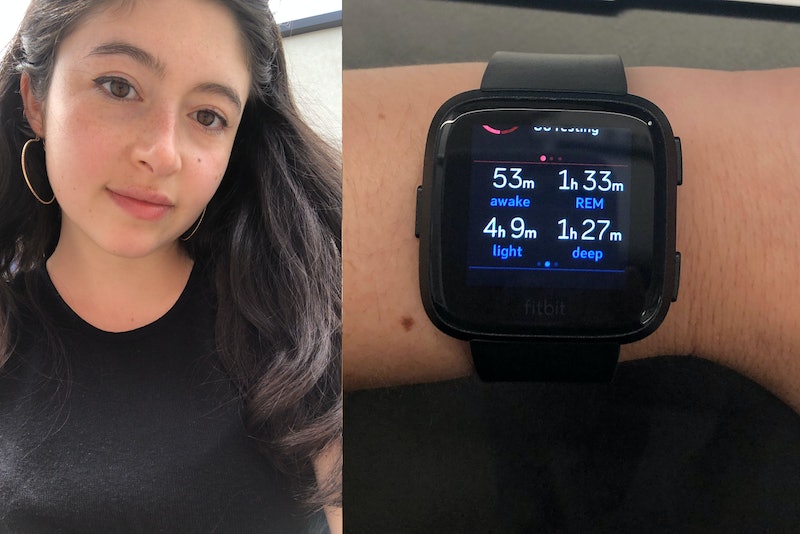 My parents were Fitbit people as soon as the fitness tracking devices hit the market. I’ve wandered into my parents’ kitchen countless times to find my mom pacing laps around the table, trying to hit those 10,000 steps. I never really understood their zeal for tracking every step: I live in New York, so I hit 10,000 steps a day (more or less) as a matter of course. But when I added running into my standard yoga-pilates routine, I started to have the very real fear of my phone flying out of my hand and shattering on the pavement. I began to think more about condensing the tech I brought with me when I exercised, but I wasn’t quite on the bandwagon yet. It wasn’t until I started hearing more about the Fitbit Versa, with its numerous tracking features on top of steps, that I realized I could see where my parents were coming from. Naturally, I asked for one for Christmas.

Reader, this device has been life-changing in the two-ish weeks I’ve had it. Not because of its abilities in step-tracking, or other workout quantification (I developed a stress fracture in my foot from overzealous jogging, so have been strictly on my pilates game), but because of the sleep tracker feature. If I wear the device to sleep, it can infer from my heart rate and its accelerometer not only that I am sleeping, but what stage of sleep I’m in, then spit out a detailed breakdown of how much time I spent in each stage, Conor Heneghan, lead research scientist at Fitbit, tells Bustle.

Having this data available has turned me into a woman obsessed. Previously, I thought I was hitting at least eight or nine hours of sleep a night with ease — I go to bed around 10:30 or 11 p.m. and wake up a little before 8 a.m. without much effort. My wearable tells me, however, that I’m actually typically only rounding out seven and a half hours, sometimes even fewer, on weeknights. The app shows me all the various times I wake up throughout the night, and it turns out there are a lot — I spend up to 20 percent of my time in bed awake, according to an average on my phone. I can’t tell if I’m waking up because of my partner rolling over in bed, a truck passing outside, or nothing at all, but having this info has made me realize I probably should invest in some earplugs, at the very least.

The other mind-blowing part of the tracker is how it breaks down the time you’re spending actually asleep. Quick science break: Everyone’s sleep is broken down into three stages, light, deep, and REM. REM is the time you spend dreaming, and it’s critical for helping you turn what happened that day into long-term memories, according to the National Sleep Foundation. Light sleep and deep sleep, which are important for learning and physical recovery, and supporting your immune system and muscle recovery, respectively, Heneghan tells Bustle. According to my tracker, I’m spending around 40-60 percent of my time in bed in light sleep, around 12-23 percent in deep sleep, and 15-25 percent in REM; this is more or less in line with the “target” ranges Heneghan suggests for healthy sleep.

This is all profoundly cool information — except for the fact that, once you have it, there’s not much you can do aside from know about it. “Obsessively checking progress throughout the day doesn’t give you any new information,” Candace Nelson wrote for SELF in an article about wearable anxiety. While you can make concrete, health-forward changes to things like your step count by simply walking more (though, as Nelson argues, making those changes as a result of feeling badly about your step count isn’t necessarily “healthy” either), sleep optimization is still a bit of a mystery to us. You can set yourself up for success with good sleep hygiene or other practices, but once you’re down for the night, there’s not much you can do to sleep better. (As Great British Bake Off contestants might say as they pop a kouign-amann into the oven, “It’s in the lap of the gods.”)

Still, what’s helpful about this particular tracker, as Heneghan says, is that it tracks everything (or everything you choose to tell it) and “analyzes trends that may be affecting your sleep.” One potential insight might say, “You sleep a bit better on nights after a run. It’s subtle, but you spend five fewer minutes being restless/awake on those nights,” Heneghan tells Bustle. By having this information in advance, you can make holistic choices that can help your sleep with an eye towards creating helpful future patterns.

It’s been two-ish weeks, and while I can’t say my sleep has gotten any better (yet!), it’s definitely gotten more informed. Having all this information at my fingertips can be a blessing and a curse, but for now I’m excited to see where it takes me.