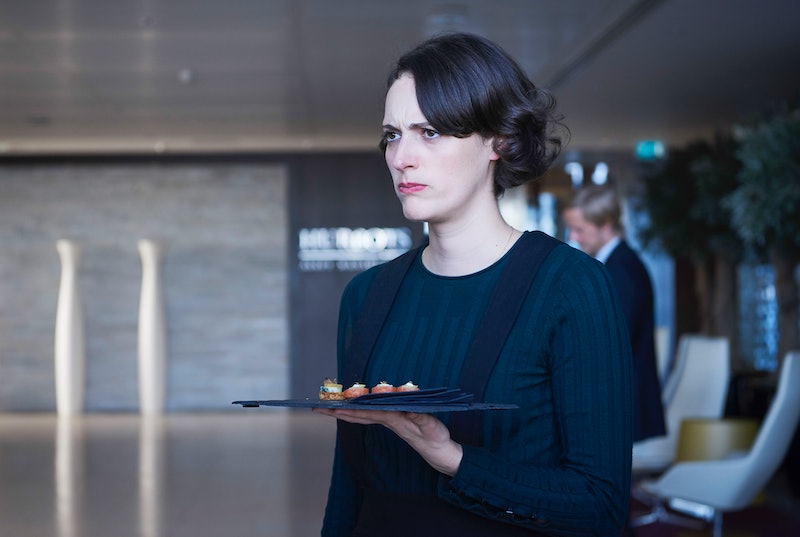 BBC Three's Fleabag is back for season 2, and the second instalment of the hit dark comedy has certainly lived up to the show's reputation as one of the most innovative, surprising, and acerbic comedies on British television. Fleabag follows the story of one woman coming to terms with the death of her best friend, all while trying to navigate her dysfunctional family. But what I'm wondering is: does the lead character in Fleabag have a name? Or is it, in fact, just "Fleabag?" You may not have noticed it yet, but go back and watch any episode of Fleabag and you'll realise that the lead character is never addressed by a name — only by "you," "her," or something similar. So, it's time to get to the bottom of this mystery.

As reported by Bustle, Fleabag was originally a one-person play written and performed by Phoebe Waller-Bridge at the Edinburgh Fringe Festival back in 2013. Waller-Bridge now also plays the lead character in the television adaptation. Fleabag makes for funny, if not uncomfortable, viewing. The show manages to suck you in by breaking the fourth wall, with Waller-Bridge's character talking directly to the audience in a style similar to BBC's Miranda (but with far more dark and and taboo topics being discussed, obv).

In an interview with pop culture site Decider, Phoebe Waller-Bridge effectively said that her character was called Fleabag, and explained the reason behind that: "I ... wanted something that would create an immediate subtext for the character. So, calling her 'Fleabag,' calling the show Fleabag, gives the subtext of 'Fleabaggy-ness.'" Waller-Bridge also explained that "Fleabag" was her family nickname.

The lead character in this series is beyond flawed, and that's probably why she is so appealing and simultaneously frustrating to audiences — it makes the name "Fleabag" even more relevant. She can be emotionally immature, she makes awful decisions, her world is steeped in privilege that's never addressed, and she uses humour as a cloak for her trauma. There's something grotesque about the word "fleabag" — messy, unpleasant, and uncared for. Almost a direct analogy for the lead character.

Names are a crucial part of being a human, and they frame a person's identity, so why does Waller-Bridge not give her lead character a "real" name? Although the writer has said her character's name is Fleabag, this doesn't actually come across in the show itself — no character calls the lead by that name, and the only way the audience would even know it was that would be by checking Fleabag's IMDB page.

In an interview withVanity Fair, Waller-Bridge said of the name: "I liked the idea of withholding some of that mystery." But Fleabag is not the only character without a proper name. Oscar-award-winning actor Olivia Colman plays Fleabags' godmother and soon-to-be stepmother. Her character is simply "godmother." Perhaps these characters are intended to simply be archetypes, and not real, human people, and therefore don't need actual names (in the same way Disney films don't tend to give names to princes or stepmothers).

A name is the first thing that you find out about a person. So the fact that Waller-Bridge has managed to withhold such crucial information for so long, and keep audiences interested, is testament to her talent as a writer.