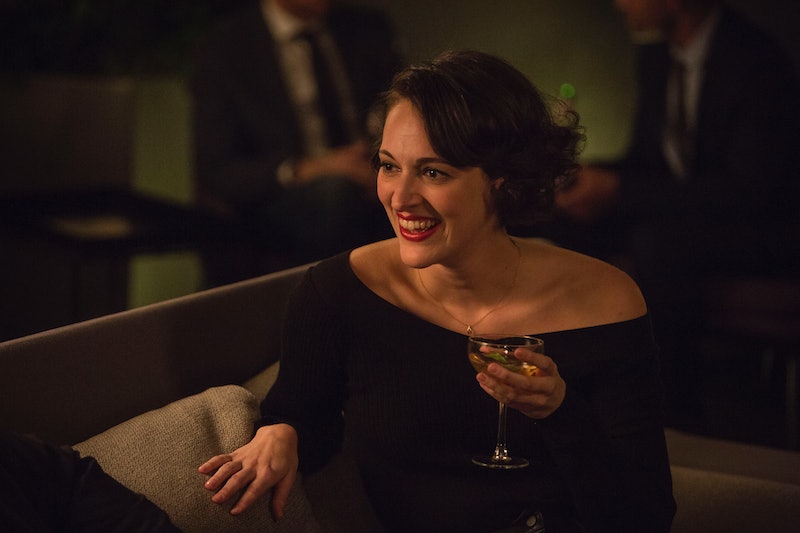 After watching every series of Love Island and getting over a bad Jeremy Kyle habit, it's easy to think that TV can’t shock you anymore. Enter Phoebe Waller-Bridge. The writer and star of Fleabag has created a show that is nothing short of phenomenal. Never before have I got such enjoyment out of watching the worst parts of myself reflected back at me. But among the beautiful chaos of this show, I have discovered one thing in particular that elevates Fleabag above all other female-led TV I have watched. The fact that Waller-Bridge never allows her character's biological clock to dictate her storyline is a total breath of fresh air, and the reason why this show speaks to me on a whole new level.

Now, I hear you. It's 2019, and there have been many TV heroines who haven't been attached to kids or a partner. But, for me, it's the fact that finding love or having kids plays literally no part in Fleabag's life. Zero. In fact, her questionable escapades with men are often what gets her into trouble, rather than what saves her. The show is a space entirely dedicated to Waller-Bridge’s character attempting to keep her small guinea pig café running, not seriously harm her horrid brother in law, and avoid seducing a priest (or not). It's just about her doing her best. And Waller-Bridge regularly breaks down the forth wall to give you knowing looks, making the point that she sees you too.

From a punch-up in a fancy restaurant to Olivia Colman's magnificent passive aggressiveness, there are a lot of things that set Fleabag apart. For one, the word “kneel” will never sound the same again thanks to this show. But Fleabag doesn’t feel like the same story of a slightly messy thirty-something that has been told before.

The female "hot mess" has been a central character in comedy for as long as I can remember. However, somewhere along the line, the character realises they aren’t completely fulfilled. Fear not though, by the end of the show they realise it was a husband and some babies that were missing all along. Their messy edges are neatened up, and they go on to live happily ever after in domestic bliss. The formula is a little bit like the outline for a fairy-tale, just with less woodland creatures and more wine.

I grew up on the likes of Carrie Bradshaw, Bridget Jones, and later Miranda Hart. They arguably helped define what it meant to be a ‘single girl’ in the '90s and '00s. However, Bradshaw ended up with Big, Jones ended up with Mr Darcy, and most episodes of Miranda were centred on her pursuit for love.

There's nothing necessarily wrong with that, but there was definitely a space for a story about a thirty-something year old woman who wasn’t endlessly looking for fulfilment from men, marriage, or children. And Waller-Bridge delivers. Not once does Fleabag denounce family life. But as a strong, independent woman, her biological clock just isn’t a central preoccupation, just as it isn't for many women in real life.

While the U.S has had shows like Broad City, Girls, and Love, homegrown comedy Miranda feels like the most obvious UK comparison to Fleabag. Both are single girls in their thirties. Both own independent businesses with questionable knowledge on how to keep them afloat and their families are, for different reasons, very quirky.

However, that's where the comparisons between Miranda and Fleabag end. Not only are the two shows completely different in tone (Fleabag is much darker), but they also tell completely different stories. Miranda is hilarious because you find yourself laughing at her ridiculous attempts to impress Gary. Whereas I find myself laughing at Fleabag because, if I didn’t, and I really thought about how she is just trying to like herself, work through the trauma of losing someone close to her, and bat away the men that she once used as a crutch to make herself feel better, then I would probably cry.

I couldn’t be more thankful for the likes of Miranda, Sex and the City, Bridget Jones, and Girls. They showed women living their lives with strong friendships and interesting careers. But real life is even more messy than these shows suggested. You fall out with family, lose friends, and act a terribly sometimes. Fleabag puts all of this on display without the underlying desire for self-improvement being so she can find a man and maybe have children. It is refreshing because it makes me realise that making yourself a better person doesn't always have to be for the benefit of others. I don't want my life to be full with worries about when I will get my act together, stop going on dates with questionable people, meet the 'one', and have kids. I feel seen by Fleabag because Waller-Bridge has finally written a character that is slowly but surely saving herself.