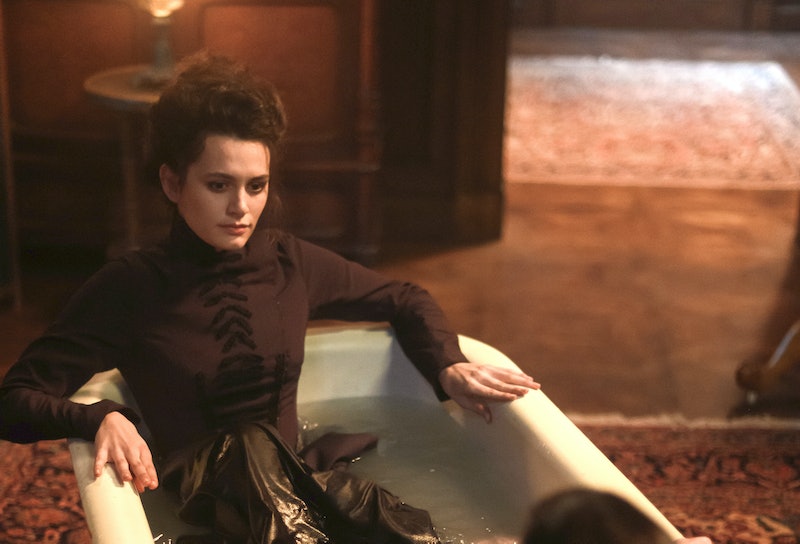 The new German-language show Freud on Netflix may have a real historical figure at its center (psychoanalyst Sigmund Freud), but it's pretty much all fiction. The real Freud never used his abilities to uncover mysteries, and he didn't have a psychic friend or lover named Fleur Salomé. But his love interest appears to be loosely based on a friend of the real Freud: Lou Andreas Salomé.

Lou Andreas was not a psychic, but Freud did laud her as someone who was able to understand people perhaps better than they could even understand themselves themselves. The New York Review of Books also said that Lou Andreas was very intelligent and able to "immediately see connections which others could not yet see." Like Freud, Lou Andreas was a psychoanalyst who studied under Freud. She was also his friend and confidante, and a writer of subjects like femininity and narcissism, according to the New York Review of Books.

In the Netflix series, which takes place in the 1880s, Fleur Salomé and Freud's relationship quickly becomes a romantic. This is an embellishment on the close friendship that Freud and Lou Andreas had in real life after meeting in 1911. The New York Times reported that it was rumored that there may have been more than friendship between them, but it wasn't ever proven. She was also much older when she met Freud that Fleur is in the show. Lou Andreas' friendship with Freud began when they were both in their 50s and she began studying under him in the early 1900s. Their confidante-ship continued via hundreds of letters that were later compiled into a book.

Even if the nature of her relationship with Freud was never proven, Lou Andreas did have documented romances with several other high profile figures of the time. She dated the philosopher Friedrich Nietzsche and the poet Rainer Maria Rilke. She also married the researcher Friedrich Carl Andreas.

Because Fleur Salomé is not a direct adaptation of the real life Lou Andreas Salomé, the actor Ella Rumpf had a lot more freedom to invent. "From the start, I had a clear vision of how I would like to create the [character of] Fleur," she told Bavaria Film. "In order to prepare myself specifically, I went to many antiquarian bookshops in Vienna and found great writings on media that reported almost like diaries on séances and their everyday experiences. These texts were written around the 1890s and are incredibly fascinating and exciting to read."

She added that director Marvin Kren was very receptive to Rumpf suggesting ideas on everything from character development to dialogue. "Marvin left a lot of space for a creative exchange on the set and at the moment. I love it when such a collaboration is possible," she said.

Kren raved about Rumpf as well, telling Variety, "Ella is such a hard working actress. She prefers to be criticized rather than getting compliments — which is so rare among actors." He added, "She was sick during some of the shoot for example, and even though she was sick she kept working, sitting on a horse outside in the cold for hours. I was so happy to have her in the series. I think she has a very bright future."

In short, the Fleur Salomé of the series is a little bit Lou Andreas Salomé, yes, but she's mostly a whole lot Ella Rumpf.