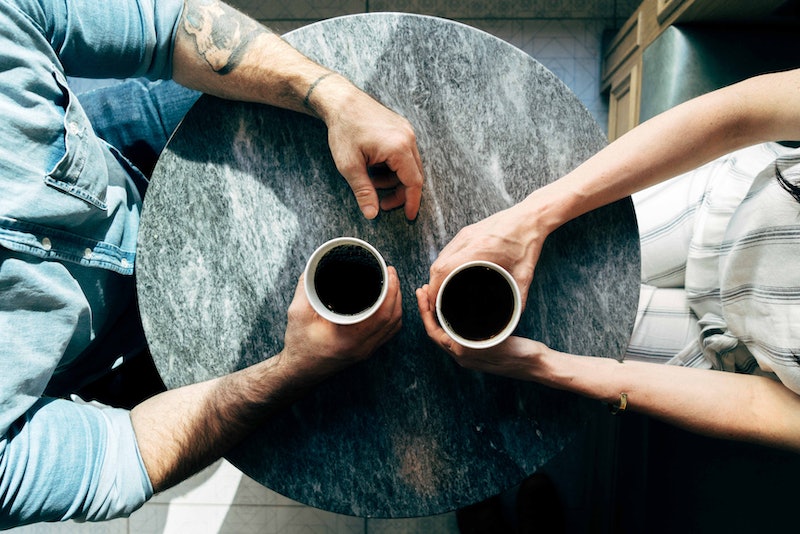 Men who have long abused their power to gain access to women's bodies are finally facing repercussions. But while some see the current climate as an important step toward protecting women in the workplace, others have voiced concern that exposing sexual misconduct will make it impossible to flirt at work. This is really a non-issue, though, considering flirting and harassment are not one and the same.

TV personality Geraldo Rivera summed up this misguided concern Wednesday, tweeting that the current influx of sexual harassment allegations "may be criminalizing courtship and conflating it with predation." But men concerned about losing the ability to flirt with co-workers are missing two key facts: 1. There are fundamental distinctions between flirting and harassment (in fact, one is illegal and one is not); and 2. Women know the difference.

To be clear: No one is trying to outlaw flirting. Flirting includes holding eye contact for a few extra seconds, asking how someone's weekend was, laughing at their jokes, and saving them the last office bagel before someone else nabs it. Flirting is not locking women in your office; exposing your penis to someone who doesn't want to see it; buying a co-worker a sex toy; telling a junior employee they'll be promoted if they sleep with you; or threatening to ruin their career if they don't. It is not unsolicited shoulder rubs, staring at someone from across the office all day, asking an employee about their sex life, or behaving in a way that would make them uncomfortable.

The recent allegations against Harvey Weinstein, Charlie Rose, and Matt Lauer are textbook sexual harassment. Weinstein was accused by dozens of women of luring them to hotel rooms, exposing himself without consent, and promising to cast them in his movies if they slept with him. Weinstein has denied all the allegations of nonconsensual sexual encounters, but many of the accusations qualify as harassment.

Rose's accusers claim he described his sexual fantasies about them, walked around nude, and groped their breasts. None of this behavior could reasonably be classified as flirting, yet in his apology statement, Rose said:

I always felt that I was pursuing shared feelings, even though I now realize I was mistaken.

Similarly, Lauer was accused of buying a female co-worker a sex toy, exposing his penis to a woman in his office, and wielding his power to sleep with women within NBC News. Lauer also issued an apology, admitting there is "enough truth in these stories" for him to be embarrassed.

The underlying themes in these sexual misconduct allegations that have come to light in recent weeks include being trapped in private spaces, nonconsensual nudity, and propositioning co-workers and employees for sex. The fact that anyone could confuse these allegations with flirting points to a deeper misunderstanding of consent that stems from men feeling entitled to women's bodies. Flirting is used to subtly show your interest in someone and try to gauge if they feel the same. Sexual harassment, on the other hand, constitutes total disregard for the other person's feelings. And assuming women don't know the difference between the two is just insulting.

Along with the horror stories publicized the past few weeks, it's also important to note that not all sexual harassment involves someone locking the door to their office and exposing himself to a co-worker. Much of the daily harassment women face at work comes in the form of lewd comments, inappropriate personal questions, and an invasion of person space.

Women still have the ability to separate this behavior from flirting. Women spend their entire lives learning how to maneuver, dodge, and prevent unwanted attention and physical contact from men, so most are experts at determining who is being creepy and who is harmlessly flirting.

If you're worried your office flirting may be construed as sexual harassment, then you're probably not flirting.

More like this
Why You're Seeing Green Bandanas At Abortion Rights Protests
By Lexi Inks
The Most Powerful Photos From The Weekend’s Abortion Rights Protests
By Melanie Mignucci
I Want More Sex But My Partner Has ED. What Do I Do?
By Sophia Benoit
Daryl McCormack On His Unusual First Audition With Emma Thompson
By Olivia-Anne Cleary
Get Even More From Bustle — Sign Up For The Newsletter