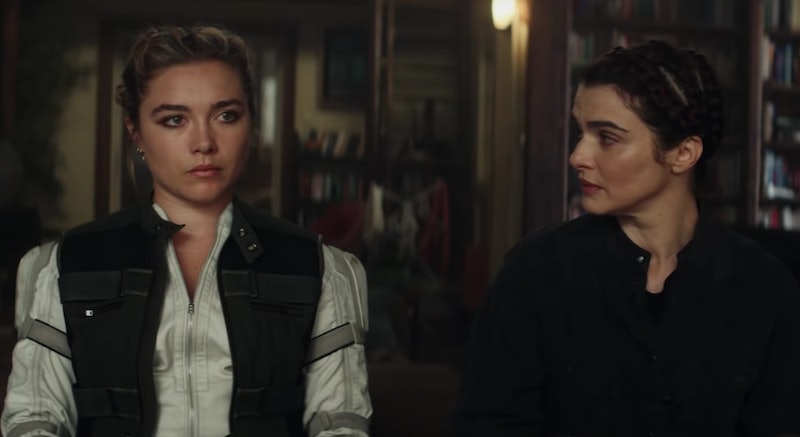 Marvel’s next female-led film is not your usual superhero narrative. As per star Florence Pugh, Black Widow is all about women repairing themselves. In theaters May 1, Black Widow will follow Russian assassin and spy Natasha Romanoff (Scarlett Johansson) as she becomes the famed superhero Black Widow in the origin story set to also star Pugh, David Harbour, and Rachel Weisz. In a feature story with the Hollywood Reporter published on Sunday, Pugh discussed the Cate Shortland-directed flick and called it “something that hasn't really been done in the Marvel films before.”

“Essentially it's about these two girls repairing themselves. These girls have been through a huge amount of hurt, and it's them getting together and trying to fix each other up,” Pugh told THR. “If you think about all those films, and you think about all those supposed superheroes, when do you see pain and when do you see what it takes to be that?"

In the film set between the events of Captain America: Civil War and Avengers: Infinity War, Pugh plays Yelena Belova, introduced as Natasha’s sister in the trailer that suggests a family reunion is at play. “It’s gonna be a hell of a reunion," Natasha says in the clip.

In conversation for Variety’s “Actors on Actors” with Beanie Feldstein in November 2019, Pugh called the film “very raw” and “very beautiful.” She said, “I think people are going to be really surprised by the outcome of a big action film having that much heart.” Black Widow famously met her death in Endgame when she sacrificed herself to save Hawkeye — a plot that sparked backlash among fans who criticized Marvel’s throwaway treatment of female characters. As such, Pugh said the solo film would be an emotional one for movie-goers.

“I know lots of people will be emotional about her because her character had such a hard ending [in Endgame],” she told Feldstein. “She’s been doing this for like 10 years in those films. For this to be her film was special.”

Black Widow arrives in theaters on May 1.

More like this
The 'Scream 6' Trailer Shows Off Hayden Panettiere's Return & Ghostface In NYC
By Jack Irvin and Jake Viswanath
You’ll Definitely Recognise The Stars Of Amy Winehouse’s Biopic
By Maxine Harrison
Rupert Grint Just Shared A *Major* Update About Ron Weasley’s Future
By El Hunt
Anne Hathaway Shared A "Thrilling" 'Princess Diaries 3' Update
By Darshita Goyal
Get Even More From Bustle — Sign Up For The Newsletter
From hair trends to relationship advice, our daily newsletter has everything you need to sound like a person who’s on TikTok, even if you aren’t.