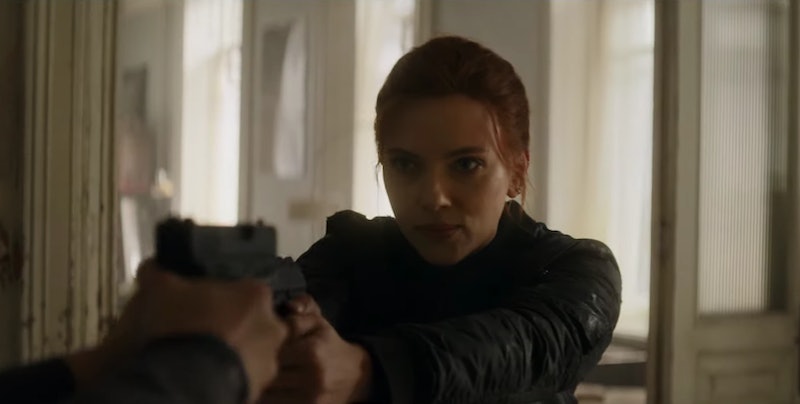 Black Widow is back. No, not back from the — spoiler alert — dead, but she is back in the Marvel Cinematic Universe in a major way. After 10 years in the MCU, one massive fan campaign, and one heartbreaking death, the first Black Widow trailer is finally here — and Natasha is ready to fight. The teaser trailer, released on Tuesday, Dec. 3, is full of good, old fashioned Black Widow fighting, and teases that she's using her skills to right her past — wipe out some red in her ledger, if you will. And that's all taking her to one place: home.

Since her introduction in Iron Man 2, S.H.I.E.L.D. super spy Natasha Romanoff (Scarlett Johansson) has dropped cryptic hints about her tragic past. Avengers: Age of Ultron gave fans the closest thing to an origin story, hinting at her time training to be a Black Widow, but now, thanks to this new film, fans are about to learn a whole lot more. That said, this solo movie isn't an origin story. Black Widow picks up after Captain America: Civil War, which ended with Black Widow leaving S.H.I.E.L.D. after a devastating fight between Iron Man and Captain America. What Nat did in the two years between Civil War and Avengers: Infinity War was never revealed, and now fans are going to get the chance to find out.

Based on the teaser, it looks like not long after Nat decided to leave S.H.I.E.L.D., she headed home to settle an old score, and "go back to where it all started." Her first stop: to visit her sister, Yelena (Florence Pugh). It turns out, Natasha had a family after all, complete with a kick ass mom, Melina (Rachel Weisz), and a slightly ridiculous, but no less badass, dad Alexei, aka Red Guardian, (David Harbour). The trailer introduces each family member, teasing a family team of superheroes. They even sit down to have a meal together in their super suits.

This will be Marvel's first family superhero team-up, putting a new twist on the genre MCU arguably perfected. In a recent interview, Johansson promised that Black Widow would "elevate" the genre, and be different than what fans have seen before. "The film talks about a lot of tough stuff. It deals with a lot of trauma and pain," the actor told Vanity Fair in November. Nothing like family to really amp up the angst — especially when your dad is a burly superhero insistent on wearing his old costume, that may or may not still fit like a glove.

More like this
Anne Hathaway Shared A "Thrilling" 'Princess Diaries 3' Update
By Darshita Goyal
Netflix Shut Down 'Bridgerton' S3 Rumours About A “Very Dark” Storyline
By Bustle
'The Queen’s Gambit' Season 2 Tweet Wasn’t From Anya Taylor-Joy
By Mary Kate McGrath, Jack Irvin and Grace Wehniainen
Twitter Is Overjoyed By Angela Bassett’s Record-Making Oscar Nomination
By Maxine Harrison
Get Even More From Bustle — Sign Up For The Newsletter
From hair trends to relationship advice, our daily newsletter has everything you need to sound like a person who’s on TikTok, even if you aren’t.