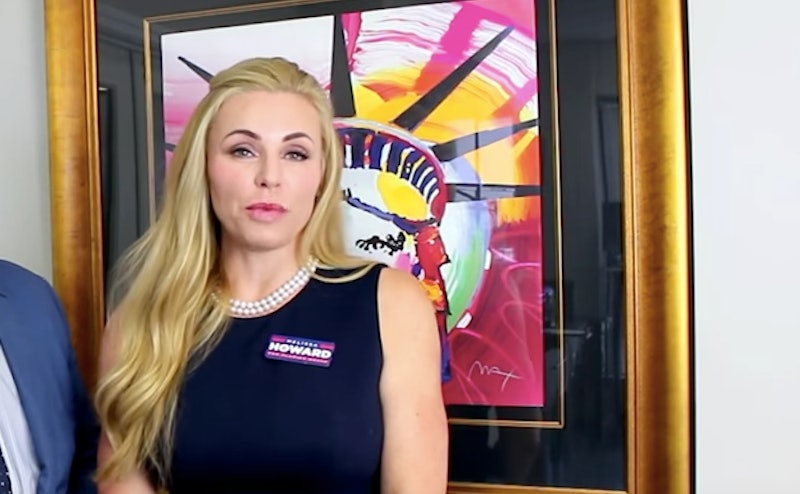 Days after getting caught posing with a forged college diploma, Florida Republican Melissa Howard has dropped out of the race for the state legislature, telling the Sarasota Herald-Tribune that ending her campaign is "the right thing to do." Just a day earlier, Howard had pledged to stay in the race.

“I made a terrible error in judgement,” Howard said on Tuesday. “I am thankful for everyone who gave so much toward my success, and I am deeply sorry.”

Formerly a candidate for the 73rd district in the state House of Representatives, Howard landed in hot water in August after FLA News Online reported that she didn't actually graduate from Miami University in Ohio, even though she claimed she did in her campaign literature. Howard called that report "fake news" and called her Democratic opponent "shameful" for supposedly spreading it. Howard then released a photo of herself and what she claimed was her diploma from the university.

"The truth shall set you free!," she wrote under the image in a now-deleted Facebook post. "It only took a night of flying back to my old stomping grounds to catch my opponent in yet another lie!"

But the university's general counsel, Robin Parker, then told the Herald-Tribune in an email that Howard "does not have a degree from Miami University." Parker said that the document she posed with "does not appear to be an accurate Miami University diploma," noting that the degree it listed — Bachelor of Science in Marketing — is not offered at Miami University.

On Monday, Howard came clean, and acknowledged misleading her supporters.

"I would like to apologize to my family and my supporters for this situation," Howard wrote in a Facebook post, which has also now been deleted. "It was not my intent to deceive or mislead anyone. I made a mistake in saying that I completed my degree."

But although Howard went on to say that her actions were "wrong and set a bad example for someone seeking public service," she nevertheless said that she's "staying in the race and intend to win and lead by example from now on." She did not address the fake diploma that she posed with or explain where it came from.

On Tuesday, however, Howard reversed course and announced that she's ending her campaign.

The Washington Post reports that Howards actions may open her up to criminal charges. In Florida, forging or altering a college diploma in order to misrepresent one's academic credentials is a first-degree misdemeanor. It's unclear if any such charges will be pursued, however, as this would first require somebody to file a complaint against Howard at a local police department. The University of Miami told the Post that it does not plan to do so.

The primary that Howard was running in is on Aug. 28th. According to the Ledger, around 20,000 Republican ballots have already been cast in Sarasota and Manatee counties, which Howard was running to represent; however, a local official says that those votes won't be counted.

“It’s still there physically but we’re not going to be officially tabulating those results anymore,” Sarasota County Supervisor of Elections Ron Turner told the Herald-Tribune. He added that on election day, polling places will have a note informing voters that ballots cast for Howard won't be counted.