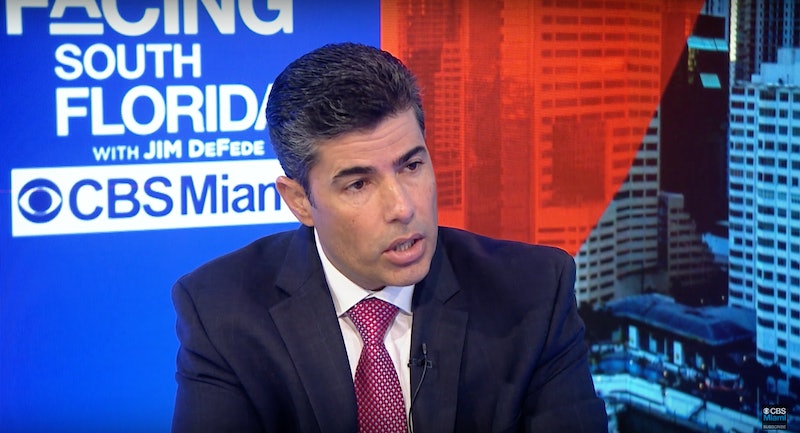 While discussing abortion policy on Thursday night, Florida House Speaker José Oliva referred to pregnant women as "host bodies" for fetuses no fewer than five times in one interview, CBS Miami reports. He later apologized, explaining in a statement that he was trying to be "dispassionate."

Oliva made the comments while discussing abortion in an interview with CBS Miami. Although he says that the issue isn't a priority of his as a lawmaker, Oliva has consistently voted to restrict abortion access during his time in the Florida legislature.

“The challenge there is that there are two lives involved,” Oliva told interviewer Jim DeFede at one point in the conversation. “It’s a complex issue because one has to think, well, there’s a host body, and that host body has to have a certain amount of rights. because at the end of the day, it is that body that that carries this entire other body to term. But there is an additional life there.”

Oliva also used the term while discussing fetal viability, noting that "as technology moves along, a human body can exist outside of its host body earlier and earlier."

"And so then one has to think," Oliva continued, "until what time does the host body have veto power over this other life?"

During the interview, DeFede asked Oliva if his use of the term "host body" was demeaning to women. He replied that he was trying to use "technical terms on both sides."

“You understand that when this discussion is being had, the fetus is also a person and that is being seen as a fetus,” Oliva replied. “And so we can either use technical terms on both sides or we can just use 'both lives.' I’d be happy to do either. The real question is, there are two lives. There is a weight and a quality to both. Both need protection. What is that balance?”

It's worth noting, however, that in several of his comments, Oliva didn't use equivalent terminology while discussing pregnant women and fetuses. Instead, he described fetuses as "lives" and women as "host bodies."

“I mean, the only definition of science of life is something that grows," Oliva said at one point. "From the moment that conception occurs there begins to be growth. And so scientifically, that’s what it is. But that’s not the question. The question is: What is the value of that life? And is it subordinate to the value of its host body?”

Oliva later released a statement apologizing for his use of the term:

In a recent interview where the very controversial topic of abortion was raised I used the term "host' to describe a pregnant woman. It was an attempt to use terminology found in medical ethics writings with the purpose of keeping the discussion dispassionate. The reaction undoubtedly shows it had the exact opposite effect. I apologize for having caused offense, my aim was the contrary. This is and will continue to be our societies [sic] greatest challenge. I strongly believe both mother and child have rights and the extent and balance of those rights remain in question. I regret my wording has distracted from the issue. My apologies to all.

State Democrats have condemned Oliva for the remarks, with state Democratic Chair Terry Rizzo saying that "you’d expect to hear this offensive language in the ‘Handmaid’s Tale’ — not from the Speaker of the Florida House of Representatives," according to the Orlando Sentinel.

Although Oliva said in the interview that restricting abortion wouldn't be his priority in the new term, he did say that he supports laws that create "cooling off periods" — that is, delays — for women seeking abortions.