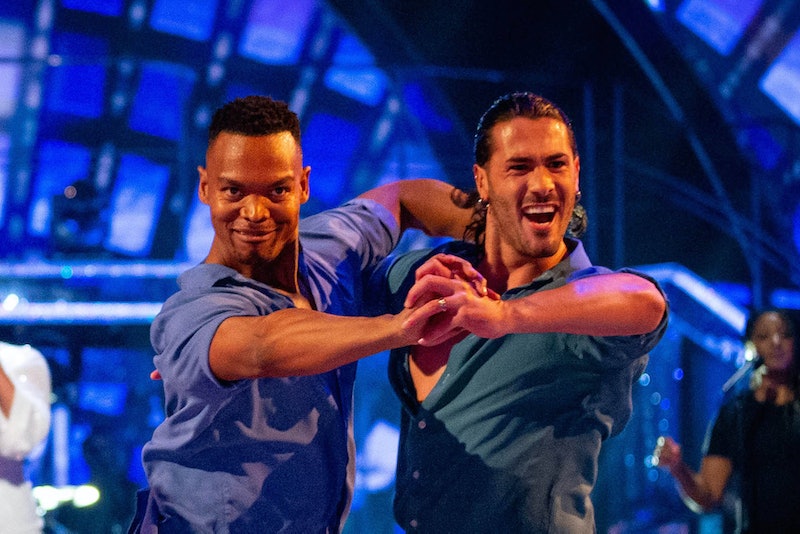 The BBC recently shared a list of moments that received the highest number of complaints in November 2019. Among them was one scene that saw two male ballroom professionals, Johannes Radebe and Graziano Di Prima, perform together on Strictly Come Dancing. The complaints — 189 in total — came in stark contrast to the well wishes seen pouring out of social media after the dance took place, but they were also a sobering reminder of the fact that homophobia is alive and well in the UK and Ireland, even today.

The prospect of a same-sex coupling on Strictly has been discussed for a long time now, with more and more fans calling for it to become a reality each year. And back in March of this year, professional dancer AJ Pritchard announced he would be very keen to be the first professional on the BBC's flagship dance competition with a same-sex celebrity partner.

The UK's version of the sequin- and tassel-laden show is actually lagging behind other countries' equivalents. Australia famously had international drag queen Courtney Act performing on Dancing With The Stars with a male partner and, in 2010, the Israeli version had TV sportscaster Gili Shem Tov and professional dancer Dorit Milman paired together.

Although many may be shocked about the kerfuffle over two men dancing on TV, for members of the LGBTQ community, it's kind of like rain at Glastonbury; you hope it won't happen, but experience and history have taught you to always pack wellies.

The mainstream media is filled with homophobia, with some instances being slightly more nuanced than others. In some cases, for example, it can come down to a matter of punctuation. In 2017, Pink News reported that the Daily Express tweeted about diver Tom Daley and his husband Lance Black's wedding and put marry in inverted commas, which Twitter users were quick to point out was incredibly condescending, at best.

When it comes to homophobia, or really any type of discrimination, there's one thing that continues to baffle me to this day. A while ago, a sage colleague of mine pointed out that, for many people, the prospect of being accused of oppressive behaviour is far more offensive and worrying than the oppression itself. In other words, they place more emphasis on how they come across than how they actually act. And there's no better example of this than an incident back in 2014 involving Rory O’Neill, who performs as icon of Irish drag, Miss Panti Bliss.

In Ireland, my native country, 2015 marked a historic and proud year for the rights of same-sex couples as we became the first country ever to bring in marriage equality by popular vote. However, in the run up to this decision, the incident involving O’Neill felt like a huge step back, especially when it comes to media.

Appearing on The Saturday Night Show in January 2014, O’Neill spoke about the changing landscape of LGBTQ rights in Ireland. During the chat, O’Neill called out a group of individuals (the Catholic lobby group the Iona Institute and two prominent Irish journalists) for continuing to exhibit homophobic behaviour despite others' attitudes in the country changing for the better.

Following the interview, the individuals O’Neill mentioned caused an uproar and even threatened legal action. In response, the broadcaster (RTÉ) issued a public apology and subsequently paid out €85,000 (around £72,980) in compensation for defamation, the BBC reports.

All this led O'Neil to make a rousing call to action at Dublin's Abbey theatre. During the speech, O'Neil identified a very painful part of being a member of the LGBTQ community, which is having some misinformed individuals tell you how to feel about how you are treated or what offends you: "For the last three weeks I have been lectured by heterosexual people about what homophobia is and who should be allowed identify it."

O'Neil went on explain the irony of homophobic people being outraged at being called homophobic:

"For the last three weeks, I have been denounced from the floor of the Oireachtas [Irish parliament] to newspaper columns to the seething morass of internet commentary for 'hate speech' because I dared to use the word 'homophobia.' And a jumped-up queer like me should know that the word 'homophobia' is no longer available to gay people. Which is a spectacular and neat Orwellian trick because now it turns out that gay people are not the victims of homophobia — homophobes are."

At the time, TV presenter and another icon of Irish media Graham Norton spoke to Hot Press, describing the move by RTÉ as "moronic."

Although these incidents may well seem like no big deal to some, we're all aware that what happens on TV and in the media has a way of seeping into the psyches of the general public. Earlier this year, the Guardian reported that the rate of LGBTQ hate crime per capita increased by 144% between 2013/2014 and 2017/2018, which proves just how far we still have to go to eradicate homophobia for good. And a large part of that journey will be about the people and the scenes we see on TV, in newspapers and magazines, and on our social media.

For those who have never experienced homophobia in the raw, the idea that it's a daily struggle may be hard to fathom. For them, homophobia translates as offensive slurs, physical attacks, and outright dismissal of members of the LGBTQ community. However, in reality, it's so much more than that. It's punctuation marks. It's media outlets backing discrimination under the guise of "freedom of speech." It's claiming that two men dancing together is offensive. It's everywhere and it's exhausting. So we must take up space. We must pack on the PDA. Because LGBTQ rights are human rights, and the battle for equality has yet to be won.