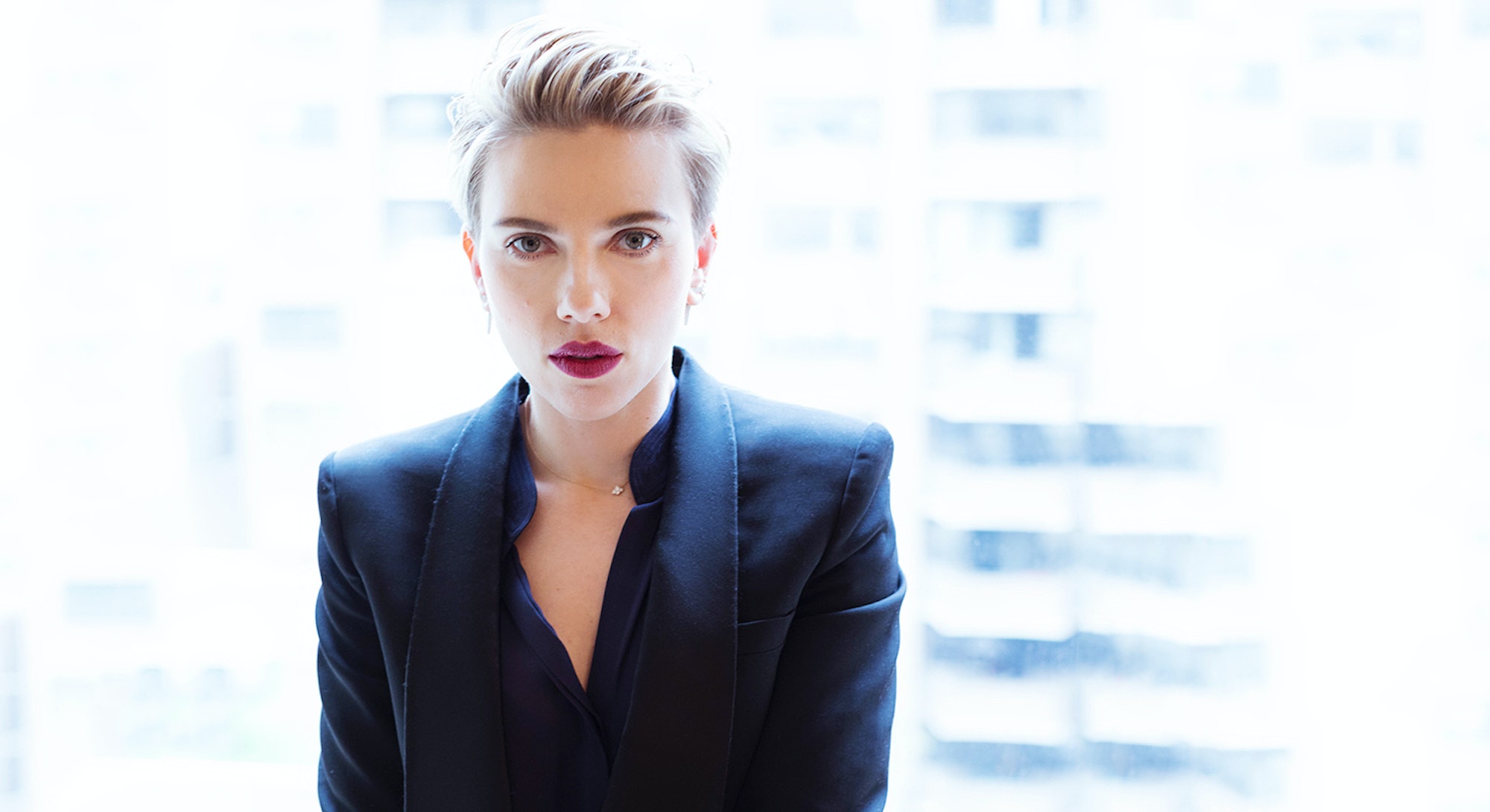 It's a little past 5 p.m. on a recent Saturday in New York, and Scarlett Johansson is talking about jumpsuits. Our photographer, she's happily noticed, is wearing the same one she owns from Reformation; the day before, she explains, she and some friends spent the morning browsing through the store's sample sale. Talking about her weekend, she's cheerful, direct, thinking before each sentence and holding your gaze with an almost unnerving directness; even as people scramble around her, fixing her hair and makeup and positioning her in front of the camera, she never loses focus, her head always, always in the game.

Considering what her last few months have been like, this can be no easy feat. An ever-busy actor (she's averaged at least two or three movies a year since her start back in the '90s), Johansson has had an even crazier last few months than usual. She voiced a role in an animated movie, Sing, which came out at the end of last year; hosted Saturday Night Live in early March, marking her fifth appearance on the show; covered magazines ranging from Marie Claire to Elle France; began filming on Avengers: Infinity War, out next May; and, most intensely of all, embarked on a months-long press tour for the sci-fi thriller Ghost in the Shell, out Friday, which had her talking about everything from brain transplants to accusations that the film whitewashed its main character.

It's been a busy time — and Johansson, for all her easygoing focus, isn't denying that it's been rough. Filming Ghost back in 2016 was "very difficult," she says, sitting down in a Ritz-Carlton hotel room at the end of a long press day. In the film, her character, Major, is a human soul placed in a cyborg body — the "ghost" and "shell" of the movie's title — whose sole purpose is to fight terrorism in futuristic Tokyo; for much of the movie, her past — and thus, her true identity — is completely unknown. Major is undoubtedly a "rich and complex" protagonist, in Johansson's words, but her story of self-discovery, and the pain she feels upon realizing her life is not what she's assumed it to be for so long, took a toll on the actor.

"Living with these feelings of abandonment and betrayal and self questioning... for the duration of shooting for the five or six months, and having very little relief from that, was very difficult," Johansson says. "There’s a huge sense of loss and grieving. I would turn to Rupert [Sanders, the director] and half-jokingly say, 'When do I get a break? When does this character ever get a break? When does something ever good happen to her?' Nothing romantic, no great surprises — she’s just living this really hard, hard time."

Johansson told Event earlier this year that she only even took on the role of Major after some heavy consulting with her therapist; having given birth to a daughter just months before being offered Ghost, she wasn't sure if she was ready for the "enormous undertaking" that the movie would be. Yet she decided to sign on, and soon became immersed in Major's intense, all-consuming journey.

"The character has such a complex inner life," she tells me. "She is living this unique experience of being a human brain trapped in this sort of machine-y body, and it's this existence that’s been chosen for her... but then there’s this ghost, this soul or spirit that’s trying to catch her attention and lead her down this path of self-discovery."

That in and of itself would've been enough of a challenge already, but news that Johansson had been cast as the lead in a movie based off a Japanese manga caused significant controversy, with many fans accusing the film's creators of whitewashing. Mamoru Oshii, director of the lauded original animated version of Ghost in the Shell, has been vocal in his defense of Johansson's casting, telling IGN that "there is no basis for saying that an Asian actress must portray her" as "The Major is a cyborg and her physical form is an entirely assumed one," and Johansson herself has defended her casting in publications like Marie Claire. Yet still, some fans and critics have continued to disagree, even using a Ghost in the Shell meme generator on Twitter meant to promote the film as a means to protest.

Months into Ghost's press tour, Johansson is more than familiar with the criticisms lobbied the film's way, but she says she wasn't expecting them to come about in the first place.

"It was a bit of a surprise to me," she says, nodding as she recalls the time. "I was already deep into the shooting. I was totally immersed in the experience of this character and this quest for identity. ... [Major] has no sense of her past, her origin story, I guess you would say, and I was really holding onto this universal quest for identity that we all share."

As the comments piled on, Johansson took comfort in speaking to Oshii, and she says now that his encouragement made all the difference. "Having Oshii give his seal of approval, and have his support definitely gave me some peace in a very unsettling situation," she explains. While it's clear that Johansson is being careful with her words, it's also obvious that she cares deeply about the subject.

"I would never presume to play a race that was not mine. Ever," she says, laughing for emphasis. "I think diversity in Hollywood is an important conversation to have, and I think it is something I totally understand, and support."

"Our cast is incredibly diverse, and it was really important for Rupert to have this film, this universe, feel very international and... have all these cultures kind of mixing," she continues. "So that was our take on it."

But regardless of what people think about her casting, or the difficulties she might have had getting into Major's mind, Johansson is staying focused — on the "once in a lifetime opportunity" that was playing the iconic character, on the pleasures of being in an action movie that's also focused on the development of its characters ("one hand doesn’t always hold the other," she says dryly), and on figuring out her next move, which, right now, seems to be comedy (she has the hard-R Rough Night coming up, and, hopefully, another trip to SNL down the line).

It's been a wild couple of months, that's for sure, but through it all, Johansson isn't batting an eye.