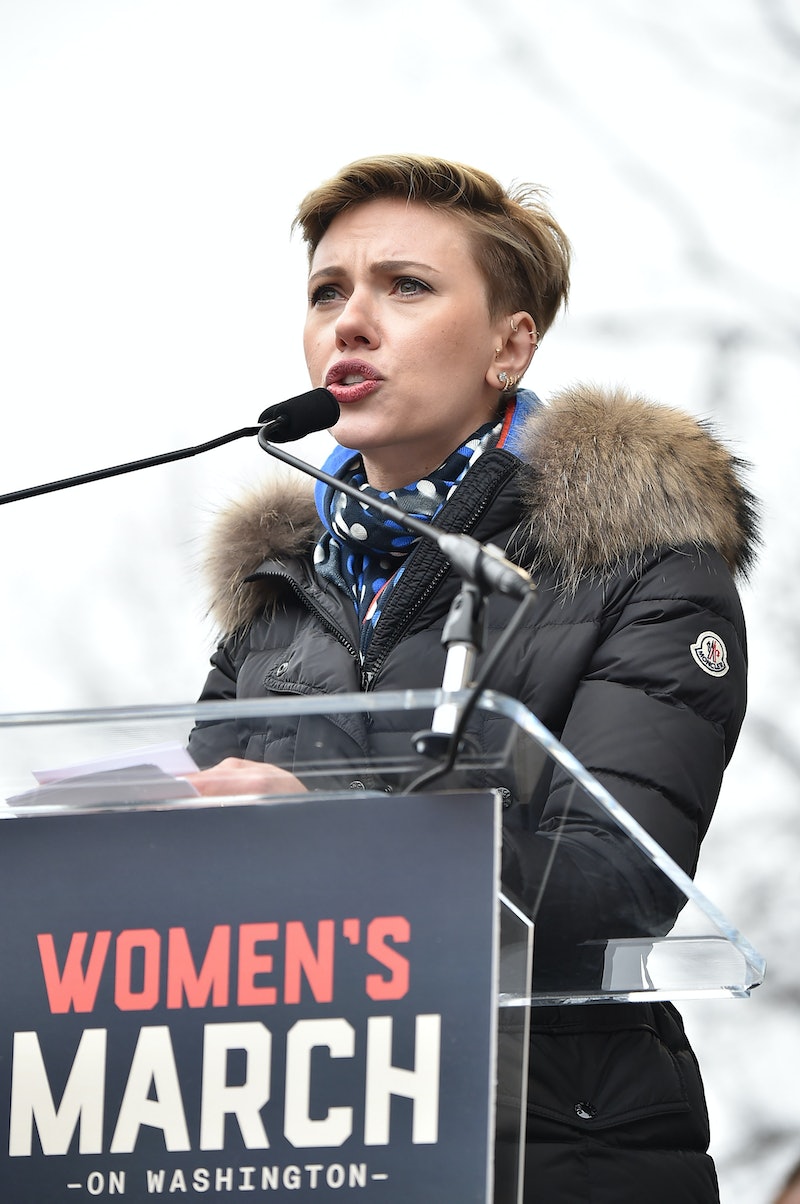 In May 2016, Scarlett Johansson told Cosmopolitan that budget cuts for Planned Parenthood would move us backward, when we are supposed to be moving forward. It shouldn't come as a surprise then, that she attended the Women's March on Washington and delivered a speech about women's health care. Though it's a subject many have discussed during the election — and after it — Johansson's Women's March Speech was a call to action to keep the fight going. After sharing a few anecdotes about how her friends and family have benefited from the services of Planned Parenthood, Johansson said,

"For the more than 2.5 million patients a year that rely on Planned Parenthood services ... these are uncertain and anxious times. There are very real and devastating consequences for limiting access to what should be considered basic healthcare."

As the actor noted, for millions of women — and men — Planned Parenthood is a trusted, safe space to seek health care, education, and "life saving services." If Planned Parenthood's existence was compromised, the amount of people who would suffer is almost immeasurable.

Johansson continued to address the new president directly. She declared, "President Trump, I did not vote for you. That said, I respect that you are our president-elect and I want to be able to support you. But first, I ask that you support me. Support my sister. Support my mother."

Then, she turned the spotlight on our futures, and the futures of succeeding generations. "Support my daughter," she declared. "Who may grow up in a country moving backwards, not forwards," echoing the sentiments she shared earlier in Cosmo. Johansson then made a comparison between what her daughter might not see in this world and what Trump's daughter, Ivanka, had the "privilege" to witness. "I ask you to support all women and our fight for equality in all things," she shared to conclude the thought. Accessible health care for women would be a good place to start.

In September of last year, Trump reportedly wrote an open letter to pro-life leaders wherein he promised to defund Planned Parenthood if elected. Now that he's in office, it seems likely that Trump will continue to push this plan forward, and with the amount of conservative power in Congress, Planned Parenthood might have a difficult time defending its place. But, only if we stay silent. Johansson urged us all to get out and stay active within our communities, to not "let feelings of helplessness make" us "complacent." To not "give up" our "power." To donate or volunteer. Whatever it takes.

She's committed to the cause as well. "I will not stop fighting to make basic women's health care available to all. I believe with every fiber of my being that the conversation that we have with our partners and doctors about what we do with our bodies' futures should not be made fodder for any politician," Johansson shared. She added, "We must stand up and always move forward, never backwards."

If there's one attitude that encapsulates the fight for women's health care during this time, let it be this one — always move forward, never backwards.

More like this
Twitter Is Identifying With Sally Field & Jane Fonda’s Friendship In New Viral Video
By Jake Viswanath
Man Meets Politics: ‘Boy Meets World’ Star Ben Savage Is Running For Congress
By Jake Viswanath
Watch Jacinda Arden’s Devastatingly Honest Resignation Speech
By Sam Ramsden
Eurovision Has Been Given A Whole New Look Ahead Of Its Liverpool Debut
By Bustle UK
Get Even More From Bustle — Sign Up For The Newsletter
From hair trends to relationship advice, our daily newsletter has everything you need to sound like a person who’s on TikTok, even if you aren’t.