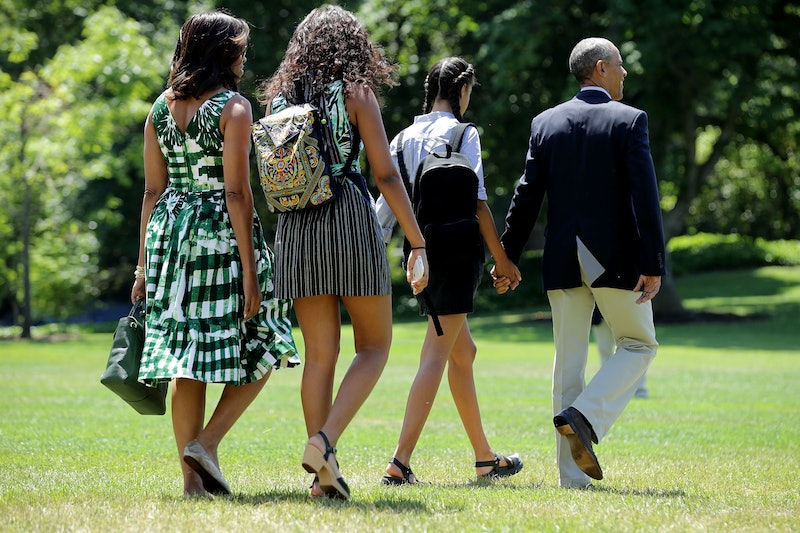 I think my upstairs neighbors must be training for some kind of tap dancing Olympics. Or jumping rope directly above my living room. Or trying — and failing — to learn how to use pogo sticks. It's more than a little annoying and running into them can be awkward ... but as bad as that can be, it's nowhere near as awkward as the living situation that President Obama and his family are moving into this Friday. You see, the Obamas are moving to the Kalorama neighborhood of Washington D.C., where the other new family on the block is Jared Kushner and Ivanka Trump.

It might be the first time in my life I haven't been jealous of Sasha and Malia Obama. They had to spend their adolescences in the national spotlight, and now that they're supposedly being allowed to retreat into private life, they'll be at risk of running into Trump's closest family every time they step outside.

Imagine trying to go for a jog only to run into the daughter of a man who spent years working to convince America of the bizarre lie that your father wasn't even born here. Imagine running into Donald Trump himself, on his way to Ivanka's for dinner.

Amazon's Jeff Bezos is reportedly moving to Kalorama as well, making the neighborhood a likely home for the country's wealthiest, tensest block party.

Not that any of this will likely faze Kalorama's existing residents. The neighborhood has long been home to some of D.C.'s biggest names, including five other ex-presidents. "Famous people have always lived here," Kalorama resident Penn Lupovich told theWashington Post. "It's Washington — if you don't like it, don't live here." Lupovich and other Kalorama residents interviewed by the Post seemed completely unperturbed by the concept of Donald Trump's grandchildren coming around for trick-or-treat. Of course, none of them have been attacked as publicly or personally by Trump as President Obama.

Yet even for the Obama family, all that awkwardness might be worth it for the grandness of the area. According to Urban Turf, the neighborhood, whose name means "beautiful view" in Greek, was developed by "upper middle-class residents [who] spared no expense in constructing their dream homes." The Obamas' new residence, accordingly, is a beautiful multimillion-dollar mansion, which they are reportedly renting for an estimated $22,000 per month.

This will probably give them some consolation, though it's still hard to imagine they'll invite Jared and Ivanka to the housewarming.