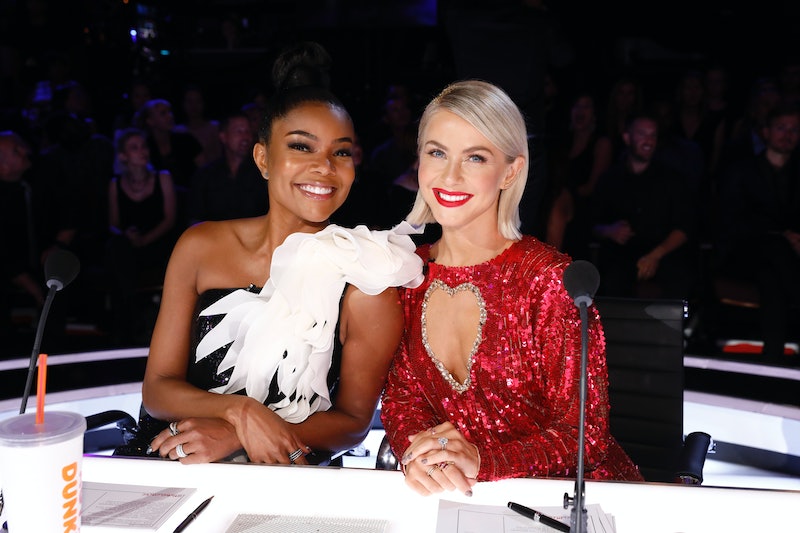 Last month, Gabrielle Union was reportedly let go as a judge on America's Got Talent following her complaints about a few "offensive" incidents on set that allegedly went unaddressed by production. Now, former AGT judges are addressing the Union controversy including Howard Stern and Sharon Osbourne. Both of whom are speaking out about the reports of a toxic workplace culture on the AGT set.

During his SiriusXM show on Monday, Dec. 2, Stern blamed judge and producer Simon Cowell for Union's AGT departure, per The Hollywood Reporter. Stern claimed that Cowell is overly loyal to the men on the judges' panel. "He sets it up that the men stay no matter how ugly [the men] are, no matter how old they are, no matter how fat they are, no matter how talentless they are," said Stern, who, after four seasons on the panel, left the show in 2015. "He replaces the hot chicks with hotter chicks and younger chicks." Along with Union, it was announced that fellow judge Julianne Hough is also leaving the show after Season 14. Previously, Mel B and Heidi Klum were at the judge's table in seasons 8 through 13.

"Howie’s [Mandel] doing a fine, serviceable job — why don’t they change him?" Stern said about the longest serving judge, who has been there since 2010. "And why don’t they change Simon?... This is the ultimate example of a boys’ club." (Bustle has reached out to Cowell for comment, but did not receive an immediate response.)

On Tuesday, Dec. 3, Osbourne also reacted to the news of Union leaving AGT on her talk show The Talk. While she said that she was never mistreated by those who worked on the set of AGT, she did have problems with the higher-ups. "It's hard, because everybody's experience on a show is different, and I was at that show for six years," she said, adding that she quit "because of NBC, not because of the show."

Osbourne added that she could not speak to Union's specific complaints regarding the show's toxic workplace, which according to a Nov. 26 Variety report included "urging producers” to report a racist joke reportedly made by guest judge Jay Leno to human resources. Variety also claimed that Union reportedly received criticism over her hairstyles, which were deemed “too black."

"Obviously, there wasn't anybody of color on the panel when I was there, so I honestly can't say," Osbourne said of the reported offensive behavior. "But when I was there it was, you know, a great show to work on. The crew and everybody was amazing to me, everybody, except the network."

Outside of the AGT community, Union has received support online from fellow celebs, including Grey's Anatomy's Ellen Pompeo, who called for "unity and solidarity" among all women. And though Union hasn't released an official statement on AGT, she did tweet a thank you to fans for their support. "So many tears, so much gratitude," she wrote on Wednesday. "THANK YOU! Just when you feel lost, adrift, alone ... you got me up off the ground. Humbled and thankful, forever."

More like this
'Bachelorette' Vet Clare Crawley Unveiled 2 Special Wedding Day Accessories
By Stephanie Topacio Long
'Bling Empire: New York' Star Nam Laks Is The “Blair Waldorf Of Thailand”
By Alyssa Lapid
We Finally Have Some Answers To How Heather Gay Got A Black Eye On 'RHOSLC'
By Samantha Rollins
Hannah Ann Got Engaged 3 Years After 'The Bachelor' & The Proposal Was Dreamy
By Grace Wehniainen
Get Even More From Bustle — Sign Up For The Newsletter
From hair trends to relationship advice, our daily newsletter has everything you need to sound like a person who’s on TikTok, even if you aren’t.