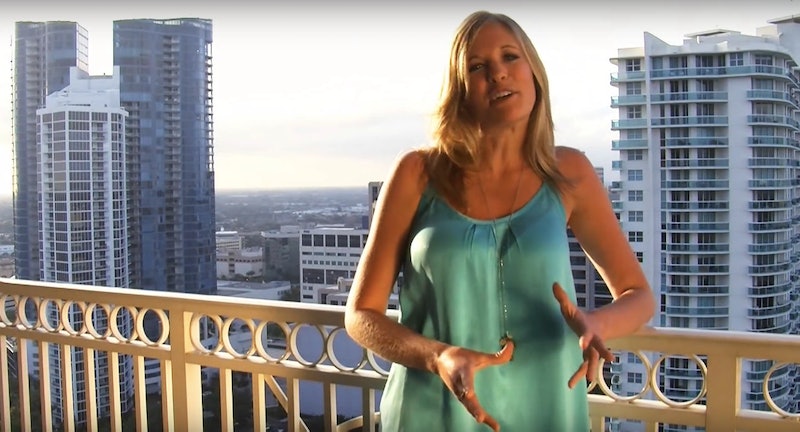 It's a sad day for Bachelor Nation. On Oct. 5, Us Weekly and other media outlets reported that Bachelor alum Cristy Caserta died Thursday, Oct. 4, from an apparent seizure at the age of 38. (Bustle reached out to the Broward County Medical Examiner, the Broward County Sheriff, and ABC for comment, but did not receive an immediate response.)

According to TMZ, Caserta reportedly suffered the seizure during a training course in her home state of Florida on Thursday, and was rushed to Westside Regional Medical Center, where she was pronounced dead at 8:59 a.m. Officer Fernandez of the local Sunrise Police Department confirmed the reports with US Weekly, saying,

"The students around her noticed her coffee fell to the ground and thought maybe she fell asleep, but she was unresponsive when they approached her. They called 911, and Fire Rescue showed up and started CPR and she was still unresponsive."

An autopsy will be performed to determine the exact cause of death.

Caserta first entered the Bachelor fold during Season 15 of the popular franchise, vying for the heart of two-time Bachelor star Brad Womack in 2011. The attorney from Florida was sent home during the first week of the contest, but she seemed to have left a lasting impression on those who met her during her time on The Bachelor and beyond.

According to Deadline, Caserta had been working as a corporate counsel at MedPro Healthcare Staffing since January 2018. On social media, Caserta's Instagram account was filled with postings of her enjoying spending time with close family and friends with a bright smile, as well as the finer things in life — like vacations to beaches and wineries.

Caserta's final Instagram post before her passing showed her doing just that. The 38-year-old was pictured sipping, sniffing, and toasting her wine glass to the clear, blue Napa sky. Accompanied with a slew of wine glass emojis, Caserta captioned the Saturday, Sept. 15 post, writing, "When in Napa... 🍇 See🍷Swirl🍷Sniff 🍷Sip 🍷Savor." It seemed like she was having a good time in wine country.

Both fans and former contestants of Bachelor Nation shared their condolences all over Twitter upon finding out the news of Caserta's passing. Bachelor producer Elan Gale and Bachelor Season 11 star Michele Leavy were just a couple of those to remember Caserta on social media, as well as send thoughts and prayers to those even closer to her.

It seems that not only was Caserta a great friend to many, the Bachelor alum was also one to give those close to her legal advice when needed. Reality Steve blogger Stephen Carbone tweeted kind words about his late friend on Oct. 4:

"Sick to my stomach to see that Cristy Caserta from Brad Womack’s 2nd season, has suddenly passed away. Cristy was always there to give me legal advice in the past. I’m at a loss after seeing people post on her FB. Just spoke a couple weeks ago. RIP my friend."

Caserta will most certainly be missed by Bachelor Nation.