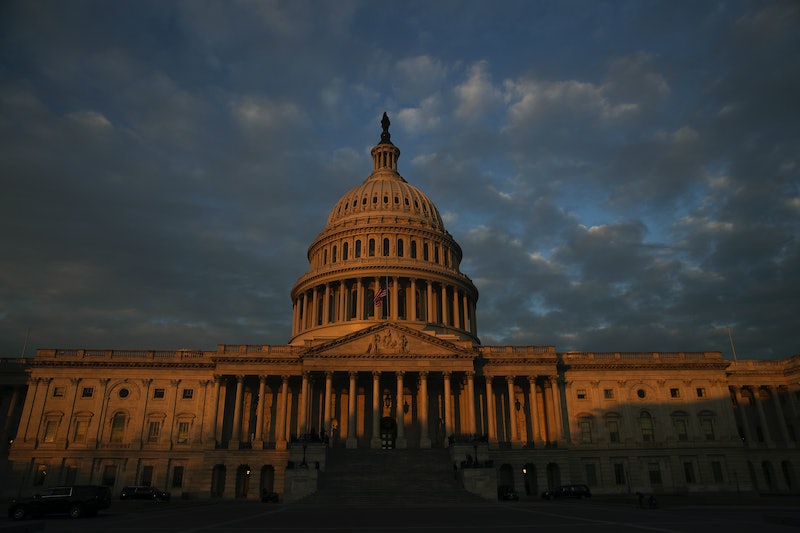 The problem of excessive partisanship in Washington definitely existed before President Donald Trump took office, but most of America can probably agree that it's only gotten worst since then. This hasn't escaped the notice of those who used to serve in government. Now, some of those people have taken the extraordinary step of warning the public about the danger that they believe the current atmosphere of partisanship represents. An open letter from a bipartisan group of former senators, just published in The Washington Post, calls on today's Congress to "[ensure] that partisanship or self-interest not replace national interest."

"As former members of the U.S. Senate, Democrats and Republicans, it is our shared view that we are entering a dangerous period," the group wrote, addressing the letter to their "Senate colleagues."

"We feel an obligation to speak up about serious challenges to the rule of law, the Constitution, our governing institutions and our national security," the letter continued.

The senators' concerns centered around the possibly upcoming end of Robert Mueller's investigation, which they say could coincide with the House of Representatives beginning to investigate Trump on multiple fronts once the new Democratic majority takes office in January.

"The likely convergence of these two events will occur at a time when simmering regional conflicts and global power confrontations continue to threaten our security, economy and geopolitical stability," they wrote in the letter.

44 former senators signed their names to the letter, and while the group is largely Democratic, there are also Republicans and independents represented. Several big names turn up in the list, including former presidential candidate and secretary of state John Kerry, former vice presidential candidate Joe Lieberman, former Senate majority leader Tom Daschle, and Barbara Mikulski, who according to Britannica was the first woman elected to the Senate for the Democratic Party who wasn't named as a replacement for a spouse. She also became the longest serving female senator in 2017.

The letter doesn't call for the Senate to take any specific actions. Instead, it merely asks for cross-party cooperation at this "critical [juncture] in our history."

"We are at an inflection point in which the foundational principles of our democracy and our national security interests are at stake," the letter continues. "The rule of law and the ability of our institutions to function freely and independently must be upheld."

So far, this Congress has displayed very few signs of inter-party cooperation. In one recent example, departing Republican Sen. Jeff Flake promised that he wouldn't vote to confirm any of Trump's judicial nominees until the Senate passed a bill that would protect Mueller and his investigation, as the Post reported at the time. Two weeks later, Politico reported that Senate Republicans had blocked the bill from appearing for a vote on the Senate floor. Now, this group of former senators has urged the body they once served in to "[stand] in defense of our democracy" as they say it has done before in times "when constitutional crises have threatened our foundations."

"Regardless of party affiliation, ideological leanings or geography, as former members of this great body," they write to conclude the letter, "We urge current and future senators to be steadfast and zealous guardians of our democracy by ensuring that partisanship or self-interest not replace national interest."