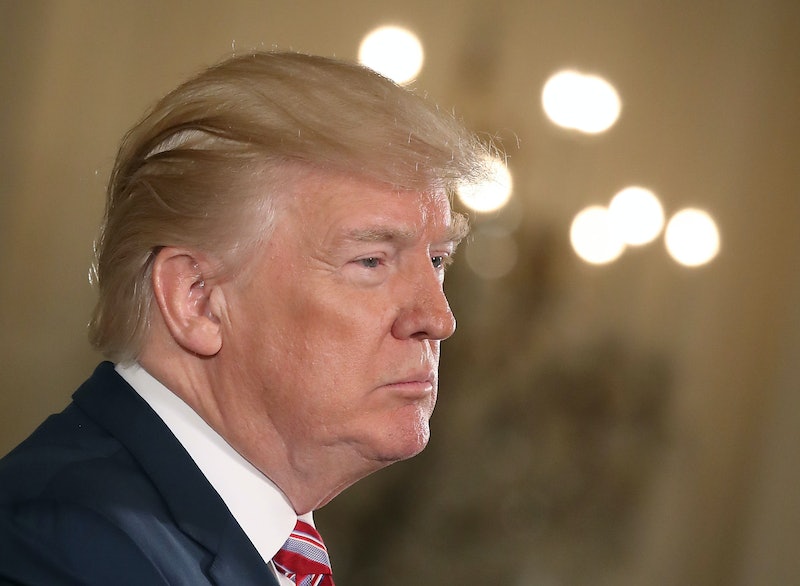 There has not been an administration in recent history as bogged down by controversy this early in its term as President Trump's. Currently being investigated by the FBI for possible collusion between his campaign and Russian officials, the president's brash tweets have done little to help his case. Considering how tough a legal challenge might be, reports that four law firms rejected requests to represent Trump in the Russia probe don't come as much of a surprise.

The president has shown that he's not great at taking advice from others, like on the campaign trail when he responded that he consults himself on foreign policy because, as he said, "I have a very good brain." In its report of the White House's quest for representation for investigations into the administration's relationship with Russia, Yahoo cited Trump's inability to take advice and listen to others as part of the reason he was turned down by a handful of top law firms.

Other reasons for turning down the job were for existing commitments and previously scheduled trials, according to the report. Another consideration, according to Yahoo, was the optics that would come from working with such a controversial president.

Some of the lawyers who turned down Trump include Brendan Sullivan of Williams & Connolly; Ted Olson of Gibson, Dunn & Crutcher; Paul Clement and Mark Filip of Kirkland & Ellis; and Robert Giuffra of Sullivan & Cromwell, the report detailed.

Trump's administration is being investigated by special counsel Robert Mueller, as well as four congressional committees — the House intelligence, the Senate intelligence, the House oversight, and the Senate judiciary subcommittee on crime and terrorism. Others involved in the investigation so far include Michael Cohen, Trump's personal lawyer; Michael Flynn, his former national security advisor; Jared Kushner, Trump's son-in-law and senior White House advisor; and Paul Manafort, his former campaign manager.

Trump's current lawyer is Marc Kasowitz, who has represented Trump many times before, including a case in which he defended Donald and Ivanka Trump against a man who was attempting to buy three Trump casinos after Trump Entertainment Resorts declared bankruptcy. Kasowitz also a special advisor to Trump on regulatory reform, according to The New York Times. However, Kasowitz is not a criminal lawyer (he's represented Trump in mostly business and personal battles like divorce), and he has little experience in political cases, which has raised questions about his appointment.

Truthfully, Trump is a wild card. Often, the characteristic Trump supporters cite when asked why they like him is that Trump says what everyone's thinking. However, when it comes to a congressional investigation, this trait may not be a positive one, and it might actually prevent him from getting the legal advice he needs.