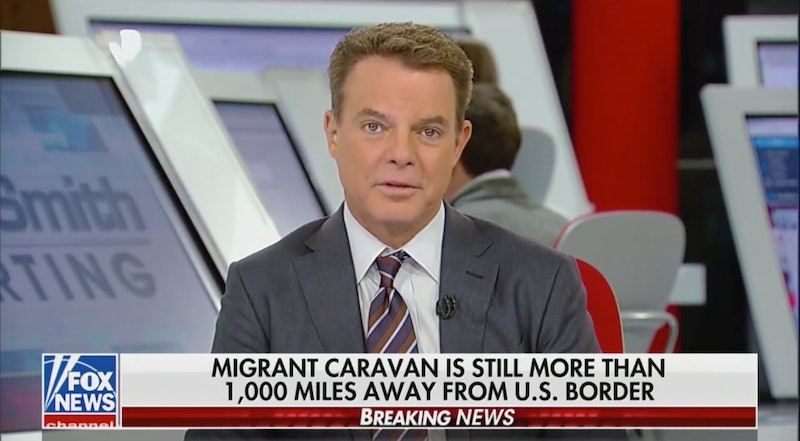 The president's favorite cable news channel usually presents the news in a similar light as the White House. But one anchor presented another point of view on Tuesday. Fox News' Shepard Smith fact checked the migrant caravan and contradicted what President Trump has said about the matter.

Smith related the situation of the migrants and how far they are from the country — "nowhere near the U.S. border" — and said that it's not the national emergency that the president has suggested. "They’re not coming to get anyone. They’re seeking relief from their hell at home. And that’s the truth," Smith told viewers.

He particularly focused on how difficult the walk was for the migrants, showing interviews and video of the injured and sick. "The walkers are reported to be exhausted, many sick, riddled with injuries from the hard journey,” Smith said. "There’s concern that children could die if they pass out because there aren’t enough ambulances and doctors even to treat them." It will take them 44 days walking eight hours a day to reach the border.

The last interview ends with a member of the caravan saying he will push on because things are "not so easy" in his country. Smith then spoke directly to his viewers:

"The situation is not so easy in our country." What would it take for you to walk with your family for more than 1,100 miles in 105 degrees feels-like temperature with an entire government telling you we don't want you to seek asylum from whatever you're trying to scape? Imagine.

"Let’s take a look at how all this really began, the politics aside, please," he says. Smith goes on to explain that many Central Americans face gang violence and many decide to seek asylum in the United States to escape it.

Some 7,000 people are slowly making the journey northward, many of them from Honduras, and are about 10 days into the journey. Mexican officials tried and failed to stop them at the border over the weekend. Another second caravan has started in Guatemala.

Trump has had a different message with regards to the caravan, predicting the worse possible outcome. "Criminals and unknown Middle Easterners are mixed in," Trump tweeted on Monday. "I have alerted Border Patrol and Military that this is a National Emergy. Must change laws!"

Smith challenged the president's version of events openly. "The President has called it an assault on the U.S. border," Smith said. "It is absolutely not. It’s nowhere near the U.S. border."

This is not the first time that Smith has spoken out to clarify the facts on the migrant caravan. On Monday, he also addressed the issue on air. "President Trump is calling the caravan a national emergency,” Smith said. "And he’s claiming criminals and unknown alleged Middle Easterners are mixed in with the crowd. An important note: Fox News knows of no evidence to suggest the president is accurate on that matter. And the president has offered no evidence to support what he has said."

Ironically, some believe that Trump's misinformation originally came from the Fox News morning show Fox & Friends. Host Pete Hegseth, with no proof, suggested that there might be ISIS fighters among the migrants. Trump only tweeted out his comments after that aired.

Smith didn't hesitate in setting the record straight — for Hegseth, Trump, and his viewers.