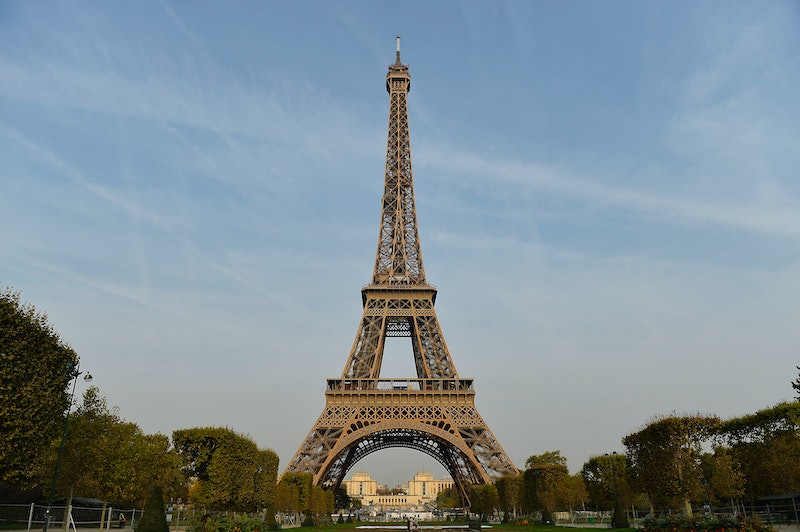 The #MeToo movement has resulted in legislation in France, as the country's national assembly passed a bill on Wednesday to protect women from harassment — including catcallers on the street. Under the new legislation, France's catcalling fine could amount to hundreds — even thousands — of dollars.

The bill still needs to be passed by the French senate, but it is supported by President Emmanuel Macron who says it will ensure women "are not afraid to be outside." The fines will start at 90€ (about $106) and go up to 750€ (about $882). They must be paid on the spot to the enforcing officers.

According to Le Monde, the law can be enforced by all sorts of police officers and security personnel, including officers who work on French rail and Parisian public transit. The typical fines can increase for repeat offenders, reaching as high as 3,000€ (about $3,529).

The Washington Post reported that harassment can include anything that "infringes the freedom of movement of women in public spaces and undermines self-esteem and the right to security." Examples from officials the paper quoted included whistling at someone, following someone, and asking for personal information such as a telephone number several times in a row.

The government minister behind the new bill is the minister for gender equality, Marlène Schiappa. She's been on a media tour in recent months explaining the ins and outs of the bill, and now some 90 percent of the French public support the bill, according a poll released in March.

That could be because so many French women have been the victim of such harassment. The Guardian reported that a 2016 survey by a public transit agency showed that some 83 percent of women had experienced the kind of street harassment that the bill would outlaw.

Schiappa spoke out just outside the United Nations’ session of the Commission on the Status of Women in March. She explained to Reuters why even though France is a "feminist country," such a law was necessary. She said it was to turn thought into action. "The idea is to lower the threshold of tolerance,” Schiappa told the news agency. “Let people see what they were blinded to.”

"We have to say: ‘Young men, you don’t have the right, you’re not allowed to follow women on the streets, to intimidate them," Schiappa added while at the UN.

As for the requirement to pay the fine instantly, Schiappa said in March that it's all about making the law efficient. "The idea is that it is high enough to be a deterrent but also that we could be sure the harasser can pay it immediately, so that the law can be efficient," Schiappa told The Guardian.

As for the pushback to the #MeToo campaign in France, the minister is not letting it phase her — or endanger the law. Some 100 prominent women signed an open letter in January saying that #MeToo endangered French romance and sexual freedom. Schiappa didn't buy it.

“There is some reluctance; some say we will kill the culture of the ‘French lover’ if we punish street harassment,” Schiappa told reporters in the lead up to the bill. “But it’s the opposite. We want to preserve seduction, chivalry and 'l'amour à la française' by saying what is key is consent. Between consenting adults, everything is allowed — we can seduce, talk. But if someone says 'no,' it's 'no,' and it's final.”

Anyone who doesn't respect the overarching view there that street harassment is a problem will now have to put their money where their mouth is, with thousands of dollars.