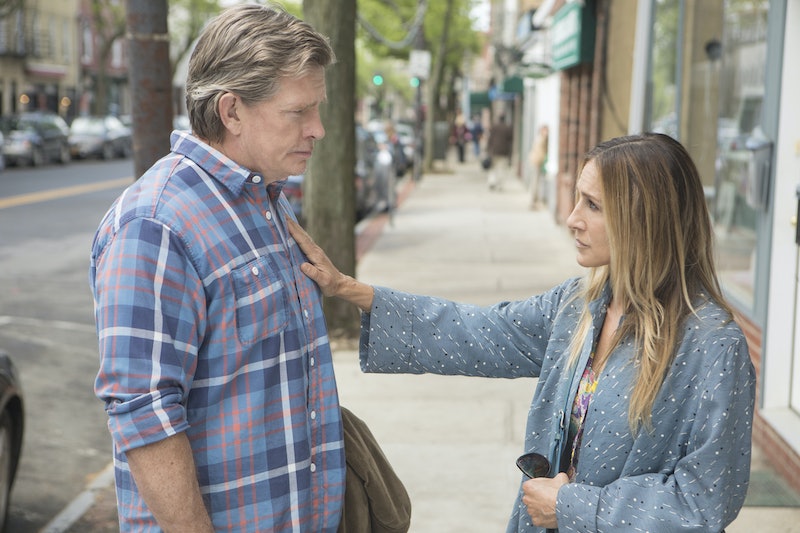 At the Season 1 conclusion of Divorce (program creator: Sharon Horgan), things were not going so well for Frances and Robert. Despite the fact that their children could see it all, they were beyond unkind to each other. Season 2 of Divorce brings a bit more calm to the Dufresne household — Frances and Robert are divorced on Divorce, but that could have been the easy part.

The Season 1 finale was a doozy — Frances had Robert’s assets frozen, and Robert called the cops on an unsuspecting Frances. The charge? Kidnapping, since Frances only had Robert’s verbal confirmation that she could take the kids skiing instead of a written court order. It was a shockingly aggressive move in a relationship that has mostly been passive-aggressive, and yet, they must have worked it all out, because Frances and Robert are signing the paperwork in the premiere of Divorce Season 2. They’re agreeing on giving Robert his Eagles albums (and there was a funny “let’s-up-the-billing-hours” bit by the lawyers here, who really wanted to enter that into the official records), and they’re agreeing on custody. Except for one problem — Robert is currently living in one of the houses he’s trying to flip, and there is no sheetrock on the bathroom walls. The kids can’t spend the night until a breeze can’t blow through the house.

This is a rational and sane thought, but, as we’ve learned from Season 1, Frances and Robert’s impulsivity prevents them from being rational, sane people. It begs the question that how did these people even get married when they are clearly such a bad match for each other? Season 1 showed Lila and Tom, the Dufresne kids, fill in the adult roles in the family since their parents were too busy undermining each other to parent. Season 2 highlights that Lila, especially, is still a child — she bikes over to her father’s house in the middle of the night because she misses him and wants to spend more time with him, and because her mother is driving her up the wall. She “wants to change her future” (a callback to a pep talk Robert gave when he was coaching her basketball team), and she announces to Robert that she wants to live with him, walls on the bathroom or not.

Frances is not helping the situation. She’s become even more reactionary during her divorce, even buying a trampoline off of Craigslist so that her children will think she’s the “fun” one and not the bad cop parent that she usually is. It seems, though, that Frances is holding on so tightly to her children that she is pushing them away. Frances took a buyout at her company to run the gallery and spend time with Tom and Lila, but it’s almost too much time. It's unlikely that forcing activities upon them in the interest of fun (look! A trampoline!) is going to make their living situation feel any more stable.

And on Robert’s side, he may be the "fun" parent, but right now, he’s living in a house made of two-by-fours and sleeping on an air mattress. Robert isn’t the pinnacle of responsible adulthood and parenting, either. The more the kids push away from Frances, they lean to Robert — but Robert isn’t a great role model, either. He called the cops on the mother of his children just to hurt her. She wasn’t even doing anything wrong. What kind of example does that send to Tom and Lila? Frances and Robert have been behaving badly since the inception of their divorce proceedings, and while they’re finally divorced now, they’re forgetting about the emotional collateral damage to their children. And, this is just the Season 2 premiere, folks! Things are probably going to get worse before they get better. After all, if Tom and Lila keep pinballing back and forth between their angst-ridden parents like this, one day, Tom and Lila may just walk away all together, tired of having to parent themselves and Robert and Frances.

More like this
Why Simone Ashley Had To Study Snails For Intimacy Training, Pre-‘Bridgerton’
By Grace Wehniainen
James Marsden Kept Teddy’s Westworld Season 4 Return A Secret “For Years”
By Brad Witter
Don't Expect To See Your Fave Modern Royals Depicted On 'The Crown' Season 6
By Jack Irvin
At 14, Kate Berlant Had A Wheelie Backpack & One Line In 'Lizzie McGuire'
By Samantha Rollins
Get Even More From Bustle — Sign Up For The Newsletter