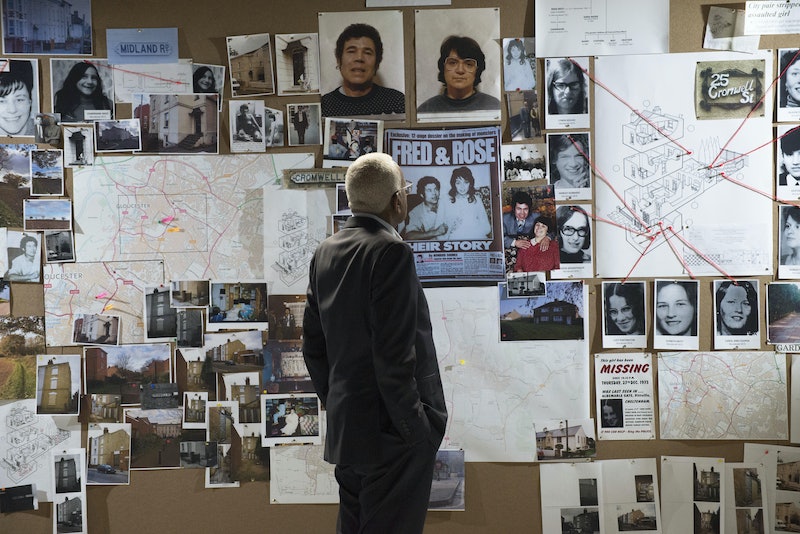 Part of ITV's Crime & Punishment series, Fred & Rose West: The Real Story With Trevor McDonald is set to air tonight (Feb. 21) at 9 p.m. on ITV. The documentary follows (you guessed it) renowned journalist Trevor McDonald as he speaks with the families of the victims — some of whom have never given interviews before. The former newsreader will look at new evidence about Fred and Rose West, but the families and their stories will stay at the forefront of this documentary, highlighting the huge damage a crime like this can have all these years later.

Originally set to air at the end of last month (Jan. 31), the programme was cancelled last minute by ITV and replaced with a different McDonald documentary, which was about death row inmates, The Sun reports. In a statement provided via Twitter, ITV wrote: "Tonight's advertised documentary has been postponed for legal reasons and the film will be scheduled for a later date. Instead another chance to watch Death Row with Trevor McDonald." No further details were provided around the legal reasoning in the postponement.

If you are not aware of the story of Fred and Rose West, it is reported that Fred killed "at least 12" women and girls between 1967 and 1987, "burying the remains of nine of them under his home in Gloucester," the BBC writes, before continuing: "Rose West was convicted of 10 murders in 1995 and is now serving a whole life sentence."

Fred and Rose West met when Rose was 15, The Sun reports. After secretly marrying one another in 1972, the couple eventually moved to 25 Cromwell Street in Gloucester. Their property has now been dubbed the "house of horrors," iNews reports, after the police discovered bodies "buried in the garden, the cellar and underneath the floorboards."

According to Gloucestershire Live, the McDonald documentary is set to highlight how Rose West may have been more involved in the crimes than was first though. Gloucestershire Live reports that psychologist Professor David Canter said of Rose West: "[I]t's very probable that she was already very manipulative and she saw in Fred somebody she could manage in some way to achieve what she wanted." This is echoed by the official blurb on ITV's website, which reports that "viewers will see fresh evidence indicating that at times Rose may in fact have been the driving force in these horrific crimes." Rose denied the crimes, and continues to deny them today, Gloucester Live reports.

As iNews reports, it's not known whether the West children "who survived the ordeal" of living with their parents will appear in the McDonald documentary. While McDonald does dive deep into the case by speaking to former bosses of the couple, to lawyers, and to social workers, as Gloucestershire Live reports, the most important aspect of this show is getting to hear from the families of the victims, and allowing them to have their side of the story told.