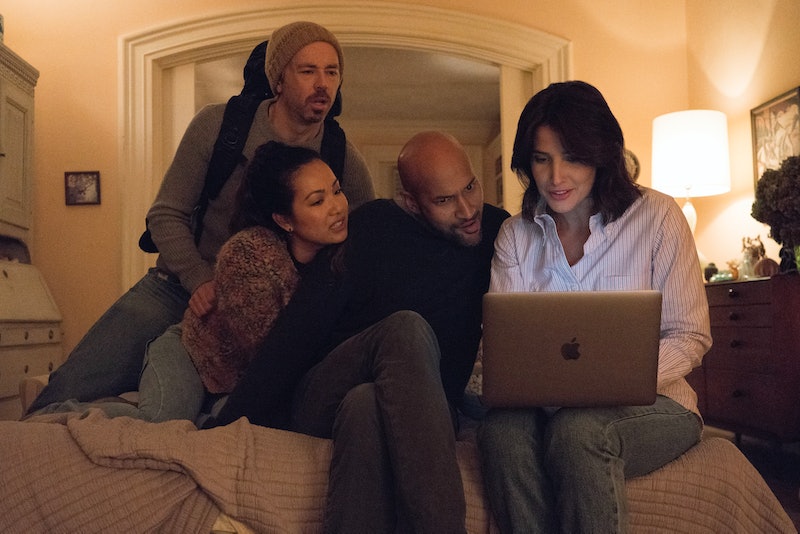 When you realize that Nicholas Stoller and Francesca Delbanco went to Harvard just like the characters in their new Netflix series, you may wonder if Friends From College is based on their lives. But at the June 26 New York City premiere of the series, the show's creators were quick to make the distinction to Bustle that while it is based on a particular time in life that they can relate to, Friends From College is not a true story. And that's good news for the married showrunners since what Keegan-Michael Key's Ethan​, Cobie Smulders' Lisa​, Annie Parisse's Sam​, Fred Savage's Max, Nat Faxon's Nick, and Jae Suh Park's Marianne go through during the series, premiering July 14, is far from enviable.

While Stoller, who has been behind movies as varied as Get Him to the Greek and The Muppets, and Delbanco, who wrote the novel Ask Me Anything but has never written for TV before, went to Harvard 20 years ago like their characters, Friends From College is not about Stoller and Delbanco's friend group. Not only did The New York Times write that Stoller and Delbanco didn't know each other at Harvard despite their time at the Ivy League university overlapping (they met and started dating after college), but the pair is quick to point out that the characters they created aren't based on anyone. "The characters in it are not direct representations of anyone we know or anyone we're friends with," Delbanco tells Bustle at the Friends From College premiere.

That includes the creators themselves since when asked how much is based on their own experiences, Delbanco and Stoller share a look. "I'm always giving a nervous laugh whenever anyone asks that because I'm like, 'We are not having an affair with other people. Neither of us are,'" Delbanco says to Bustle. She's referencing that much of the main drama of Friends From College stems from the fact that Ethan and Lisa are married, but Ethan has been having a long-distance affair with Sam since college. The affair becomes even more complicated when Ethan and Lisa move to New York City where the rest of the gang is located.

Because this affair came from the imaginations of Delbanco and Stoller, the series' inspiration is less about specific people and their actions and more about what it feels like to be forced into adulthood. Throughout Friends From College, the six friends approaching their 40s revert to their old behaviors from their time spent at Harvard — all while dealing with the very adult struggles of career failures, infidelity, and infertility. "What we drew from it, in terms of our own experience, was this feeling of this time in life where people are kind of like forced to grow up kicking and screaming, whether they feel ready to or not. And that you have a lot of responsibilities suddenly and adult life is no longer something you can put off any longer," Delbanco says.

Rather than going into Friends From College thinking any of it is biographical, Stoller says their lives more contributed to the "emotional premise" of the series. And just because their personal lives aren't featured in the series doesn't mean it won't feel true. Stoller frequently balances comedy and drama in his films — specifically in Forgetting Sarah Marshall, The Five-Year Engagement, and even Neighbors to some extent — and that leads them to feel more true to real life than movies that stay strictly in the comedy genre. The same can be said of Friends From College.

"The stuff that I laugh the hardest at is when it's honest and true," Stoller says to Bustle of his inclination to incorporate both comedy and drama in his work. "When it's just jokes, I feel untethered and so I don't laugh as much, so I can't even really separate the two."

With this blend of comedy and drama, the creators say they wanted to explore the idea of friends being like family — and the good and bad that goes along with being so close. So even though the series is not based on real life, their characters' experiences in Friends From College will still feel realistic.

More like this
Letitia Wright's Aisha Encourages A Vital Conversation Around Immigration
By Maxine Harrison
Then Vs. Now Photos Of The 'Enchanted' Cast In 2007 & The Sequel's Stars In 2022
By Marina Watts
See 'Twilight' Stars Together Again For A Sweet Cullen "Family Reunion"
By Stephanie Topacio Long
'The Princess Diaries 3' May Go Ahead Without Anne Hathaway
By Darshita Goyal
Get Even More From Bustle — Sign Up For The Newsletter