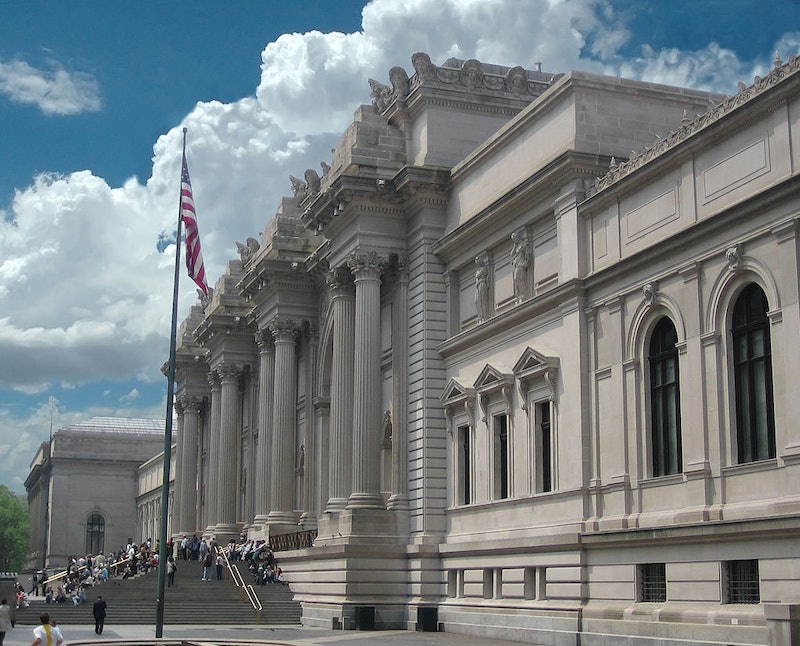 I love big book anniversaries, because they always reveal lots of insider information on my favorite works of literature. E.L. Konigsburg's most famous book turns 50 this year, and it turns out that From the Mixed-Up Files of Mrs. Basil E. Frankweiler had some serious real-life backing.

If you haven't read From the Mixed-Up Files of Mrs. Basil E. Frankweiler since grade school, here's a quick primer on the plot. At 12 years old, Claudia Kincaid decides to run away from home, and devises a scheme to hide herself and her younger brother Jamie in the Metropolitan Museum of Art, where the two children hide from security guards at night and blend into the crowds of visitors during the day. They bathe in the Fountain of the Muses and sleep in a giant Tudor bed that belonged to Elizabeth I's lover and his — probably murdered — wife. Really, it's a grand old time.

The Met acquires a new statue from an auction held by a famous New York City art collector, the titular Frankweiler. The Angel captivates Claudia, who immediately sets about solving its biggest mystery — whether the statue is really an undiscovered work by Michelangelo. In order to find out, Claudia and Jamie travel to see Frankweiler, who tells them that they can find the answers they seek in her files, which are arranged according to the collector's tastes.

After solving the mystery of the Angel, which is indeed a Michelangelo, Claudia and Jamie return home. Meanwhile, Frankweiler arranges a meeting with her lawyer, the children's grandfather, and changes her Will to name the Kincaids as her heirs.

I'm sure many book nerds will be happy to learn that From the Mixed-Up Files of Mrs. Basil E. Frankweiler isn't all fiction. When she took up weekend art lessons in the city during the 1960s, Konigsburg would drop off her three children — Paul, Laurie, and Ross — at the museum.

"Mom would meet up with us in the museum," Paul tells Smithsonian.com, "take us to study Impressionist or Modern art. It always made me want to puke, but we did it every weekend for over a year."

These Saturday excursions formed the basis for what would become From the Mixed-Up Files of Mrs. Basil E. Frankweiler. In 2001, Konigsburg revealed that seeing a piece of popcorn on a chair behind a velvet rope in the Met made her wonder if "someone sneaked in one night [and] snacked."

The museum had also recently acquired The Lady with the Primroses, a plaster-and-stucco sculpture, for $225. The statue captivated the NYC art world at the time, and rumors buzzed that the piece was an authentic work from either Andrea del Verrocchio or his student, Leonardo da Vinci. The Lady with the Primroses is nearly identical to a marble sculpture by Verrocchio, on display at Florence's National Museum of Bargello, and the Met's version is now believed to be a cast made by Leonardo for his master.

Konigsburg's children took part in her writing process. Paul tells Smithsonian.com, "Mom would write in the morning. When the three of us kids would come home for lunch, she would read what she wrote ... If we laughed she kept it in. If not, she rewrote it."

Although many displays at the Metropolitan Museum of Art have changed, visitors can still retrace the Kincaids' steps. Brochures inside the Met advise the curious on how to have their most Frankweileresque experience, and this summer, e.t.c. will host Mixed-Up at the Met, a tour inspired by Konigsburg's novel and others that take place around the NYC museum.