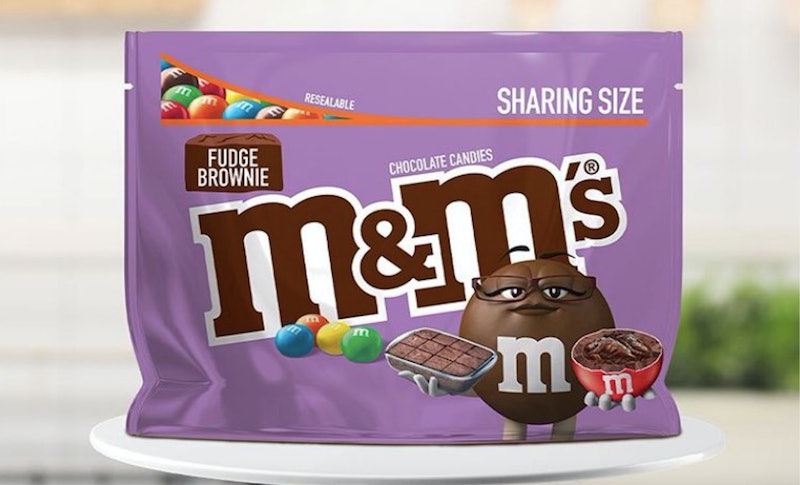 I’ll admit that when I want chocolate, I don’t often reach for M&Ms — but that might be about to change soon: Fudge Brownie M&Ms are arriving on shelves soon, and, well… I never say no to a good brownie. Even if it’s just something that’s brownie-flavored. Usually, brownie-flavored things taste like straight-up brownie batter, and, uh… that’s kind of my kryptonite. Yes, even more so than cake batter. And if the rumors are correct, we won’t be waiting long for M&Ms’ take on the flavor — possibly even just another few weeks!

M&Ms teased the new flavor via Instagram on July 31, posting a photo of its packaging along with the brief caption, “We’ve been working on something delicious… trust us, it’ll be worth the wait.” The purple bag features the Ms. Brown M&M mascot, who was originally introduced back in 2012; she holds a pan of brownies in one hand and half of an M&M that looks to be filled with a similarly brownie-like interior in the other. And just in case it wasn’t already clear what’s inside the bag, there’s an image of either another brownie or a piece of fudge in the upper left-hand corner of the bag — it's not clear which — with the words “FUDGE BROWNIE” written inside it in big, capital letters.

But this teaser, it turns out, was actually confirmation of a rumor that had made its way to Instagram a day earlier. On July 30, the newly-created Instagram account Junk Food Leaks posted images of both the packaging and the M&Ms themselves, along with a short review. It’s not currently known how Junk Food Leaks got a hold of the treats — and, as one commenter on the post noted, it is a little curious that all the M&Ms in the bag are orange, given that the package art suggests the treats will come in the standard array of M&M colors — but according the Instagrammer, the M&Ms are “larger in size” than typical M&Ms, resembling Peanut M&Ms, “just rounder.” It seems that they’re best enjoyed slowly, rather than crunching them up as soon as you pop them in your mouth; when you “[allow] them to melt a bit” in your mouth, noted Junk Food Leaks, the candies “soften up quick” while “the gooey texture of a warm brownie begins to take over your taste buds.” The Instagrammer scored them 8.3 out of 10, praising the “balance” of both “the initial M&M crunch/chocolate, and the brownie flavor that creeps up not too long afterwards.”

When I say Junk Food Leaks is “newly-created,” by the way, I mean it; the Fudge Brownie M&Ms post is the first tidbit the account has leaked. According to the introductory post that went live just before the M&Ms post, whoever runs the account “[happens] to have the privilege of sourcing new and unreleased samples of junk before they become available to the general public”; the page aims to “provide reviews and information as best as possible, and as [it is] allowed to.” Not much is known about Junk Food Leaks other than that, but it might prove to be a page worth watching.

For anyone wondering precisely when we can expect Fudge Brownie M&Ms to hit shelves, there’s unfortunately no news yet. When asked directly by another Instagram user on the teaser post, M&Ms’ social media team said only, “All good things come in time…” Junk Food Leaks, meanwhile, suggests that they might be coming “this fall or sooner,” but that piece of information currently remains unconfirmed. It’s also not known whether the M&Ms will be a nationwide release or an exclusive to a specific retailer, or whether the flavor will join the permanent line-up or if it will be limited edition. We’ll just have to keep our ears to the ground for more information as it becomes available.

Fudge Brownie isn’t the only new M&Ms flavor on the way soon, though — one of the brand’s Halloween offerings, Creepy Cocoa Crisp M&Ms, have already been spotted on shelves at some Target locations, including at least one in New York and one in California. They might not be in wide release yet — as Instagrammers Marcus and Matthew noted in their post about the treats, they probably won’t be prominently displayed until after the back-to-school season is over, which usually lasts until September — but you can always ask an employee at your local Target if they’ve got ‘em in stock yet if you just can’t wait.

Regardless, though, it’s clear that M&Ms have been busy; who knows what else might be on the way soon? Chocolate lovers, take note!