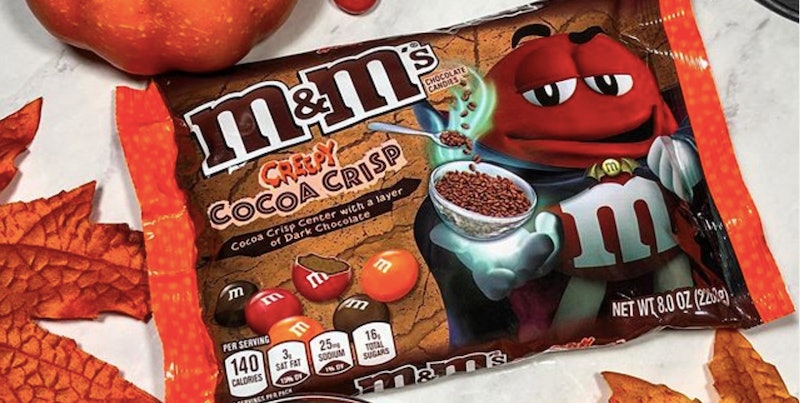 Is it too early for Halloween? Not according to some — including, it seems, Mars Wrigley: The candy giant has already begun to unleash this year’s crop of Halloween candy upon us, and among the offerings for 2019 are a special, spooktacular edition of M&Ms. This Halloween, Creepy Cocoa Crisp M&Ms will be taking our taste buds on by storm — and depending on where you are, they might already be available to you. Identical twins Marcus and Matthew, who post as a pair on Instagram under the name @mnmtwinz, spotted the spooky sweets at a Target in College Point, New York just recently, and while there’s no guarantee that your own local Target will have them yet, it’s still nice to know that a treat like this is waiting for us once we get through the worst of the summer heat. (Even though M&Ms are supposed to melt in your mouth, not in your hand, let’s face it — even the heartiest of chocolates would have trouble in the 100-plus degree heat many of us have been experiencing lately.)

Described on the packaging as having a “crisp cocoa center with a layer of dark chocolate,” Creepy Cocoa Crisp M&Ms basically sound like an even more chocolatey version of Crispy M&Ms. If you want to think about it in terms of cereal, it’s the Cocoa Krispies to Crispy M&Ms’ regular ol’ Rice Krispies. The candies themselves, however, arrive exclusively in autumnal colors — red, orange, and brown — and the packaging features Red the M&M dressed up in his Halloween best as an incredibly self-satisfied-looking vampire. Both details score bonus points in my book. Taste-wise, Marcus and Matthew note that “the dark chocolate is rich and a little bitter as dark chocolate should be”; meanwhile, they describe the crispy cocoa center as “satisfying.” Earning a “definite recommend!” from the twins, they even go so far as to say that Creepy Cocoa Crisp M&Ms “easily [beat] many M&M flavors out right now.”

This isn’t actually the first time anyone has seen the new offering; Instagrammer Munchie Bunchie previously caught sight of them at a Target in Los Angeles about a week and a half ago on July 14. Marcus and Matthew, however, left us a few more details than Munchie Bunchie did, which might help anyone looking to track the treats down sooner rather than later.

Alas, Creepy Cocoa Crisp M&Ms aren’t available online yet, so you’ll have to head to an actual store to check for them. According to Marcus and Matthew, they can be found at some Targets now, although many probably won’t stock them until after Back to School season ends (that’s typically when the Halloween aisles start to get set up). If you don’t see them out, you can try asking (nicely!) if an employee would be willing to check to the back room for them for you; per Marcus and Matthew, you’ll want to give them the DPCI number 055-00-0945. (“DPCI” stands for Department, Class, Item — it’s the unique tag by which Target catalogs its inventory.) In the event that your store doesn’t have them yet, you can also ask an employee to “find [the item] elsewhere” to see if any other stores in your area carries them.

These crispy new treats obviously aren’t M&Ms’ first seasonal rodeo; they’ve been releasing limited edition flavors pegged to specific holidays for years, with the Halloween offerings often proving to be the leaders of the pack. In 2017, for example, they launched a “Cookies & Screeem” variety into the world alongside a White Pumpkin Pie option both of which turned out to be winners. Given the fanatical enthusiasm surrounding Crispy M&Ms, however — it was BIG NEWS for the chocolate lovers among us when the variety made its way back to shelves in 2015 after being discontinued for almost a decade — there’s no doubt that this year’s Creepy Cocoa Crisp offering will please a large swathe of the M&Ms fan base.

Find out where your nearest Target is here. Good luck!