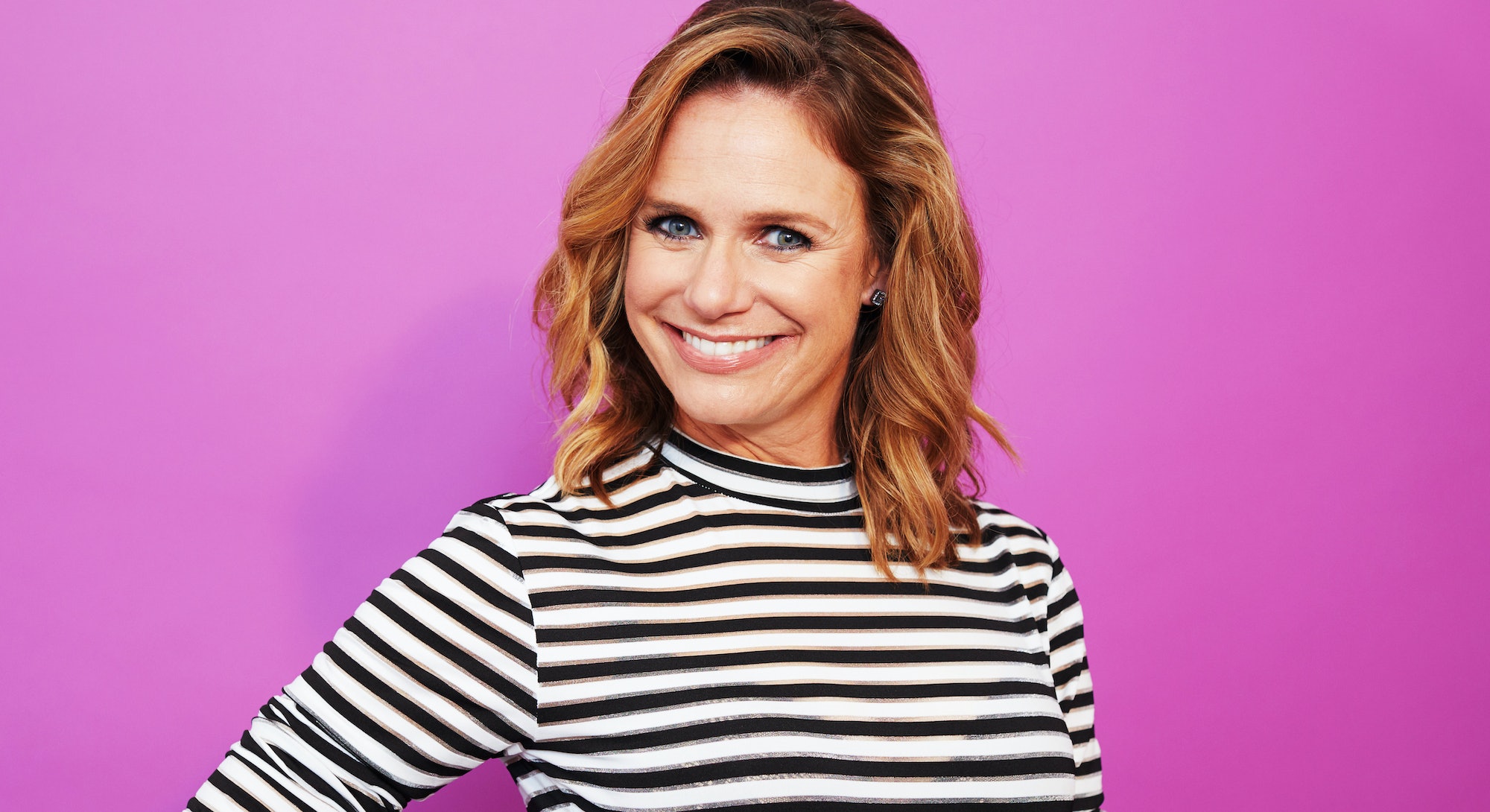 Andrea Barber asks me if she can take her heels off, and just like that I'm sitting in a room with the shoeless actor who plays Full House's Kimmy Gibbler — a character known for her smelly feet. Of course, Barber's feet don't smell. Yet, at age 41, it's still the question she fields most often. "I’ve had people who are like, 'Don’t take off your shoes,'" she says, explaining the recurring "do your feet really stink" line of questioning. "It's like, 'Really? That’s the question you’re asking me right now?'" she adds with an eye roll.

It's just one of so many things people get wrong about Barber — and just a snippet of a 30-year barrage of brutal insults hurled at Kimmy Gibbler, the perennial target on Full House, and now Netflix's Fuller House, which just dropped its third season. Twenty minutes pass before I even notice that Barber did in fact take her shoes off, when she gestures to to her feet and explains her frustration over the myth that plagues her. It's then, looking at a shoeless Barber that I realize we all owe this woman an apology for the past 30 years.

Barber was just 11 years old when she started playing Kimmy in 1987, the Tanner family's next door neighbor and D.J. Tanner's best friend. But, the age of Barber's character didn't stop her from being the butt of every joke, especially from the show's three grown men. Throughout the original series, the running joke is that Kimmy is not wanted in her own home and especially not at the Tanners'. One time, Danny tells Kimmy to "go live with a wildebeest"; another time Kimmy returns from a trip only for Jesse to ask, "Wouldn't it be great if they could lose the [plane] passengers instead of the luggage"; and one time Jesse and Joey literally scream in horror when Kimmy simply announces that she's coming over for the weekend.

"When I watch the show now, in hindsight as an adult, I think they kind of crossed a line a little bit," Barber says. "It’s one thing for Kimmy and Stephanie to have that banter," she adds, referring to the years-long beef between her character and D.J.'s little sister Stephanie. "But, when you have three grown men saying ... 'Kimmy, go home,' or 'You’re not wanted here' ... it kind of crossed a line."

It is frustrating watching the show back as an adult and seeing Kimmy being rejected by her own family and by her best friend's. It's clear that her home life is less than stellar — and the Tanners could have been a safe place for her to go. But, instead she was met with audible groans and blatant disgust every time she walked in the door, which had to have been pretty damaging for young Kimmy. In fact, it takes seven seasons for Kimmy to get the courage to stand up to Uncle Jesse — one of her biggest detractors.

"I would never say [those things] to my teenager’s friends even if I did think they were annoying."

In the episode, "Another Opening, Another No Show," Kimmy shows up to work at Jesse's club wearing a bedazzled uniform. Jesse remarks that it looks like a "clown outfit" that makes him want to throw up. Later in the episode, Kimmy, her voice full of emotion, tells Jesse, "You really hurt my feelings. I worked hard on this uniform. I just wanted to look nice for tonight." Jesse apologizes for being "a jerk." But, in "The Test," their first interaction post-apology, Jesse's back to his old jokes. "Hey, Kimmy, where are you applying? Clown college?" he asks her. It's the same clown theme that she told him upset her just a few episodes before, but he doesn't seem to care.

"I’m sure it was funny back in the day," Barber says. "[But] I would never say that to my teenager’s friends even if I did think they were annoying."

Yes, Barber has her own teenager now and a pre-teen, her 13-year-old son and 10-year-old daughter respectively. They're two of the reasons Barber is quick to point out that she didn't "do nothing" between acting in Full House and acting in Fuller House — a common critique since she left acting for 20 years. Fans expected nothing of her character, yet somehow everything of the actor. And, though she didn't owe us anything, Barber delivered — and she went to way more than clown college.

"When Full House came back, everyone was like, 'Oh, Kimmy Gibbler must be so happy because she’s been doing nothing,'" Barber remembers. "I did nothing in Hollywood, but I did a lot outside of Hollywood."

So, while her IMDB page may be blank from 1995 to 2016, Barber's life has been full of exciting adventures and opportunities that most people would never have expected the actor behind Kimmy Gibbler to accomplish. After Full House ended its eight-season run, Barber went to work for the United Nations and also got a Master's Degree in women's studies from the University of York in England, a school that began pioneering the subject as a viable major just a decade prior to Barber's attendance.

"[Women's studies] was a newer subject back in the day ... I grew up in an era when my grandmother didn’t have the right to vote," she says. "Now my daughter’s generation, they take so much for granted. They have all the rights that my mother and grandmother’s generations fought for." Exploring women's and human rights was a passion for Barber, who started interning for the U.N. after her undergrad. Barber lived in Geneva, Switzerland on her own for five exciting months where she was a fly on the wall in U.N. meetings, helping to research and write for the organization in the '90s.

"I’m human. I have faults just like everybody else, but [having depression and anxiety] isn’t even a fault. It’s just a part of who I am."

Today she still writes, and has advocated for those suffering with anxiety and depression — something she's dealt with since she was a teenager. In July, Barber penned an essay for InStyle where she opened up about her struggles with mental health.

"It has been such a private part of my life because nobody talks about it. There’s a lot of shame around depression and anxiety," she says, adding that she didn't even know until her late 20s that she had anxiety. "I thought it was normal to get so stressed out and nervous about a test or a performance that you wake up and throw up for an hour every morning. I thought that was just what you do. Then I realized later that’s not normal."

After suffering what she wrote was "one of the worst episodes" of depression during her divorce in 2014, she found that running helped her cope — and she was ready to start talking about her mental health with the public. "It was so freeing once I finally started talking about it," she says. "I didn’t feel any shame; I wasn’t embarrassed; I wasn’t nervous about sharing this article. I’m human. I have faults just like everybody else, but this isn’t even a fault. It’s just a part of who I am."

Barber's sense of self may be clearer as an adult, but her Full House character, despite being a teenager at the start, has always been sure of herself. While Barber is much more thoughtful about life than her on-screen counterpart — who was and is often characterized as rather simple-minded — Kimmy was always unabashedly herself. Barber says this was hard for her growing up — especially when Kimmy was put in crazy outfits like her infamous her light-up prom dress.

"I hated [the costumes] as a teen," she says. "I hated, hated wearing those clothes ... D.J. got all the cool clothes, and I was stuck wearing yellow tights and mismatched patterns."

But, Barber says she sees now how valuable it was for young women and girls to see themselves in Kimmy and her wacky outfits and quirky, but carefree behavior. "A fan recently said to me, 'Thank you for teaching me that it’s OK to be weird,'" she says, her eyes lighting up. "That’s what teenagers need. I wish that somebody had said that to me when I was growing up and had braces and was super awkward with my gangly limbs. It’s OK to be different. It’s OK to be weird."

So, Danny and Jesse and Stephanie may have mocked her, but Kimmy did more good, on and off screen, than anyone ever gave her credit for. And, look, a lot of us were children when the show came out and we laughed when the laugh track instructed us to — which was often at Kimmy's expense. But it's been 30 years and we know better, so it's time to own up to our mistakes. Even with everyone who lived in that full house, it was the Tanners’ “annoying” neighbor that we should’ve been looking up to all along.