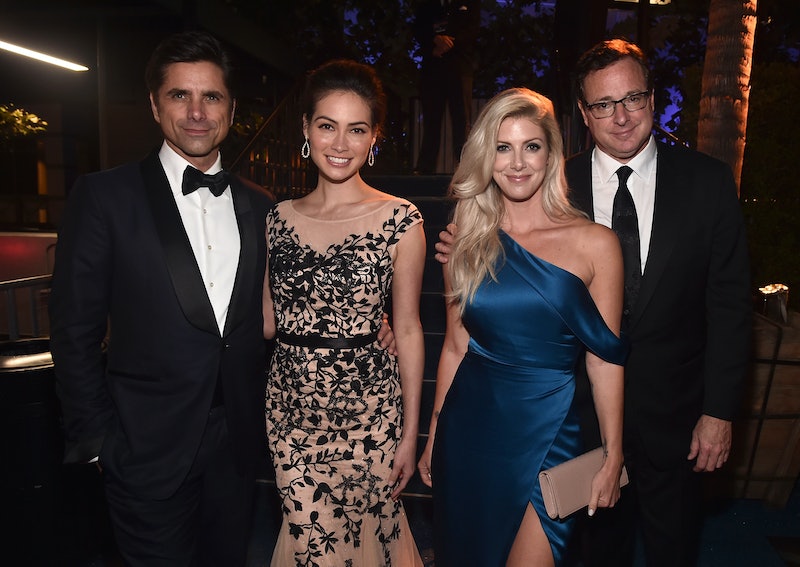 Here's some news that will certainly warm the hearts of '90s fans. John Stamos and Bob Saget recently went on a double date with their wives, and the photo is definitely the best thing you're going to see all day. The newlywed Saget, who married Kelly Rizzo in October 2018, shared the photo of the group on Instagram, revealing that the bromance between he and Stamos not only lives on, but has also transferred into group friendship that includes their spouses. The snapshot, which US Weekly reveals was taken while the foursome was out at dinner in Los Angeles, features the former cast mates seated in a restaurant booth along with their wives as they pose happily for the photo. Saget captioned the photo with a joke that highlighted his longstanding friendship with Stamos. He wrote,

"What can you say about someone you’ve loved for so long and want to spend the rest of your life with? But enough about @JohnStamos - We are both so lucky to have married these wonderful beautiful women- @eattravelrock and @caitlinskybound - And we know which one we are each married to....whew."

It seems that their wives also have developed a bond that has become familial in nature. Rizzo reposted the photo on her Instagram Story, writing, "Love having dinner with my brother and sister-in-law."

In addition to being close pals, the quartet also seem to be on the same wavelength when it comes to their romantic timelines. People notes that the couples actually got engaged just weeks apart with Saget and Stamos basically coordinating their proposals to their wives. Stamos proposed his wife Caitlin McHugh on Oct. 22, 2017, while Saget announced his engagement to Rizzo on Nov. 7 of the same year. The outlet shares that Stamos and McHugh later tied the knot on Feb. 3, 2018, and Saget and Rizzo on Oct. 28, 2018. Saget discussed the details shorty after announcing his engagement. In a Nov. 2017 interview, Saget told People,

“John Stamos and I were texting ahead of time. We are incredibly close, and I knew that he was going to [propose] — sorry, Caitlin! — and he knew that I was going to."

Both Stamos and McHugh were front and center at Saget's wedding along with many other members of the Full House cast including Dave Coulier, Lori Loughlin, Candace Cameron Bure, Jodie Sweetin, and Andrea Barber, according to Today.

Saget shared a sweet photo of the group as they celebrated his nuptials on Instagram. Referring to the collective as his "family for life" in the caption, Saget wrote:

"So appreciative my family and friends were at Kelly's and my wedding especially my family for life, my Full & Fuller House family ... I love all these people so much."

Saget and Stamos, who costarred on Full House for eight seasons have remained inseparable since the show ended in 1995. In the more than two decades since the show's finale, it seems that their relationship has continued to become stronger and stronger.