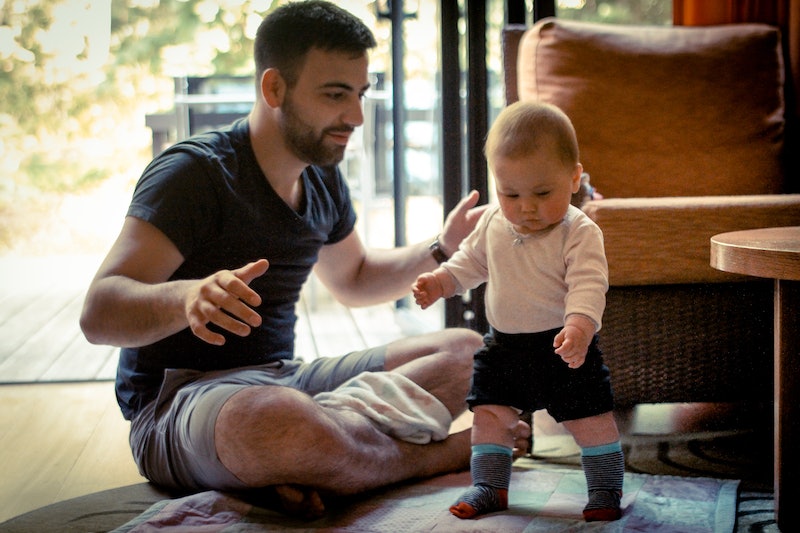 I don't have kids, but I know enough about having kids to know that I'd probably be terrible at it. I'm always forgetting to lock my front door, I often get accidentally drunk on weeknights after having cheese and Skinny Pop for dinner, I like to see how long I can go without washing my hair, and I'm pretty much always late. Parenting is one thing that's probably best left to people who know how to do the essential things in life — like light a pilot light, and wake up without hitting snooze 3-5 times (still working on both over here). Though if the first-hand accounts of the hilarious dads below are any indication, I might be better at it than I think ... and if your pops is anything like these dads, he probably wants something for Father's Day that money can't buy: a good laugh. Thankfully, I scoured the Internets and found a treasure trove of blurbs, tweets, and quotes guaranteed to make dad laugh.

Close inspection of these first-hand accounts from famous, funny dads suggests that a great deal of parenting is just feeling your way through it all blindly and hoping that nobody accidentally pees on the new couch. And I believe that. The truth is, nine times out of 10, our parents are just doin' their best. Usually, that means feeding you, making sure your get places on time and in one piece, forcing you to rest even when your crazed, seven year old, know-it-all body thinks it doesn't need to, and basically just making sure you don't die. And let's be honest: that's a tall order. This Father's Day, commend dad for all his hard work with these funny notes guaranteed to make him laugh.

"Someone asked my son what his father does for a living. He said "he plays basketball and changes his shorts." — Taye Diggs

"Having children is like living in a frat house — nobody sleeps, everything's broken, and there's a lot of throwing up." — Ray Romano

"Thinking about telling my kids Santa doesn't exist so I can get credit for some of this sh*t." — Adam Scott

"Watching Frozen again with my daughter because we paid $19.99 to download it so she's going to f**king watch it every day until college." — Michael Ian Black

“Whoever came up with the term “terrible twos” must have felt very foolish after their kid turned three.” — Jim Gaffigan

"Good parenting means investing in your child's future, which is why I am saving to buy mine a hoverboard someday." — Lin Manuel Miranda

"Sometimes I'm amazed my wife and I created two human beings from scratch yet struggle to assemble the most basic of IKEA cabinets." — John Kinnear

"ADVICE FOR NEW FATHERS: Nobody likes raising kids, so just shut up and pitch in." — Andy Richter

"Fatherhood is great because you can ruin someone from scratch." — Jon Stewart

“They somehow have worked out a system where one of them is awake at all times. I think they must be trying to raise money for something.” — Jon Stewart

"You can tell what was the best year of your father's life, because they seem to freeze that clothing style and ride it out." — Jerry Seinfeld