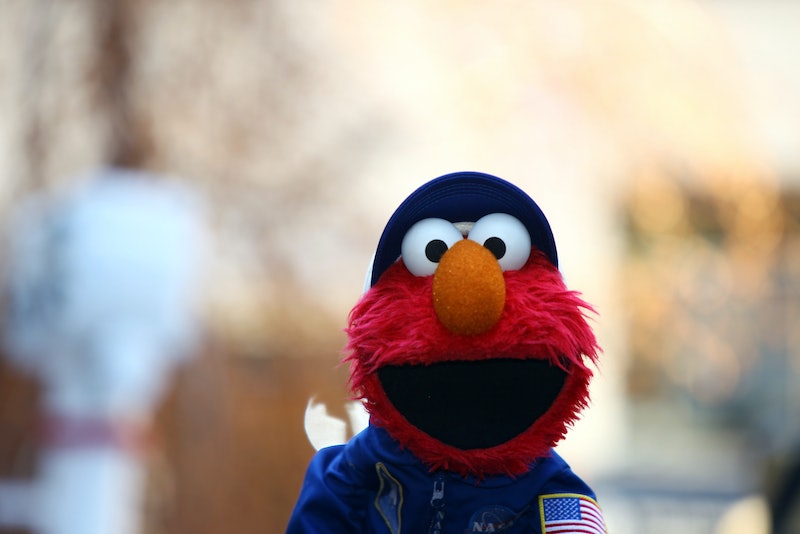 Listen — when I first saw the images of the furless Tickle-Me-Elmo on Twitter last night, I shut off my laptop, turned out the lights, and canceled myself for the next eight hours. I wasn't going to look at it or think about it or, heaven forbid, write about it on Bustle, and subject more innocent humans to the twisted menagerie of nightmares that it causes. But it's 2017, you guys — so pour one out for your last shred of sanity and hit the play button, because this creature is coming for us all.

The mechanized demon formerly known as Tickle-Me-Elmo is the fault of the Canada Science and Technology Museum in Ontario, which is frankly the most violent mental affront I have ever experienced from a Canadian. It appears that de-furring Elmo was part of summer camp programming, as the tweet shared to #ScienceMobile has the hashtag #SummerCamp. But the truth is, there is no hashtag in the world that can capture the soullessness of this poor being, which has not only been stripped of its autonomy (WHY ARE WE ALL STILL TICKLING HIM? DID HE CONSENT??), but its glorious red mane as well. Oh, Elmo. What have we done to you, old friend?

After people started (justifiably) panicking over the poor puppet's fate, the museum tweeted back, "It's all in the name of science!" But despite my support for the education of the next generation of STEM experts and Elmo creators around the globe, I stand firmly with #ElmoGate Twitter, for this is one sight that the inside of my brain space will never un-see.

This is far from the first time things have gone awry in "Elmo's World". Childhoods nationwide were similarly tainted by a video of Elmo singing heavy metal — which, given Elmo's current narrative, seems more appropriate than ever.

But if you, too, are considering de-furring a Tickle-Me-Elmo, maybe hold off — in 2014 they were still selling for $30 on Ebay, and there's a chance the worth of the older ones might go up. In the meantime, we can all try to digest our Frankensteinian horror at the intersection of science and humanity's curiosity as this continues to trend on Twitter for entirely too long for comfort.