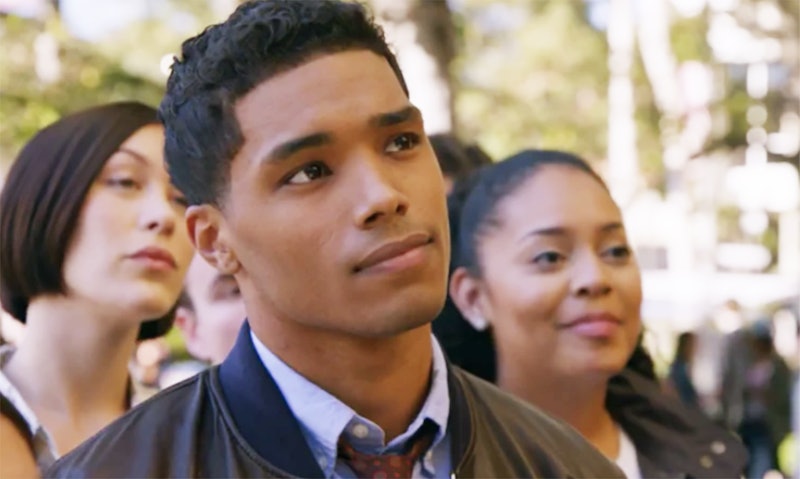 Following the Season 4 finale, which introduced a new and handsome character into the fold, there's already a popular fan theory about said character. Gabriel Maddox could be Bonnie’s son on How To Get Away With Murder, if the theory is to be believed. And, honestly, it's pretty plausible.

Speculation about Gabriel's parentage arose when the character (played by Rome Flynn) arrived at the same college tour as Frank. Upon seeing Gabriel, Frank gets on the phone and says, “Her kid’s here.” While viewers were left in the dark about who is on the end of Frank's mysterious call, fans have found clues that Gabriel could, perhaps, be Bonnie's biological child.

One major clue that Gabriel may be Bonnie's offspring comes during a moment when Nate is sifting through some files of now-deceased District Attorney Denver and finds a note that reads: “child still alive” in Bonnie’s file, along with a DNA test. In the past, it was revealed that, when Bonnie was young, her father would allow men to abuse and rape her. It was also known that she became pregnant at 15-years-old and gave birth to a baby. However, Bonnie’s father led her to believe that the newborn died at birth. Under the new fan theory about Gabriel, Bonnie's father could have faked the baby's death, sending the child off to be raised by someone else.

And, yes, there was also some speculation that Gabriel could be Annalise's son. However, the timeline of Annalise's only known pregnancy doesn't seem to fit the narrative quite as well as Bonnie's does.

Shortly after the show's Season 4 ender, How To Get Away With Murder showrunner Pete Nowalk told TV Guide that Gabriel is in his “mid-20s. He’s our classic law student age,” which would mean that his age totally fits in with the timeline of Bonnie's pregnancy. (Bonnie is currently presumed to be around the age of 40.) But don't expect to get an answer on his identity yet. Nowalk told TV Guide,

"My instinct right now is it's going to be a little bit of a mystery. Won't be too long, but I think, you know, Frank seems to know who he is. But I don't know who else does on the show. And I think it's going to be really fun to slowly — I want people to get to know Gabriel before we know his origins."

While he wouldn't say one way or the other if the theory holds water, Nowalk did address the possibility of Gabriel being Bonnie's son in an interview with Entertainment Weekly. "That pronoun, her, covers a lot of our characters, and maybe characters we don’t know. We don’t know who Frank is talking to, so that’s really a huge mystery for the next season," he said. "If it’s Bonnie, the question is: Does she know? Or does she not know? I think her reaction will come from there. But all of these questions are things that I want people to think about, and just ponder over the hiatus."

This mystery aside, Nowalk told Deadline that Season 5 will be "twisty, and more fun." In addition to learning more about Gabriel and where he came from, fans can expect to see the wedding of Connor and Oliver when the series returns next season. The HTGAWM producer said, “I will say I personally kind of hate weddings. And I hate the trope of it, so we’re going to do it in our own fun way.” Which doesn't bode well for the couple.

Nowalk also wanted to flashback to Annalise and her relationship with her deceased husband, Sam (played by Tom Verica) — lending more credence to the possibility that if Gabriel isn't Bonnie's son, then he's Annalise's. He said,

“I loved Tom Verica the actor, and I love when he comes back, so we actually have a really good flashback episode idea for next year. There’s so much of their marriage that we didn’t explore, and before they met each other, so that’s definitely a story goldmine for me.”

There's so much to be considered with the introduction of Gabriel Maddox that fans' heads are spinning. But one thing is for sure: if Bonnie ends up actually having a son the same age as the Keating 5, things are going to get really interesting next season.