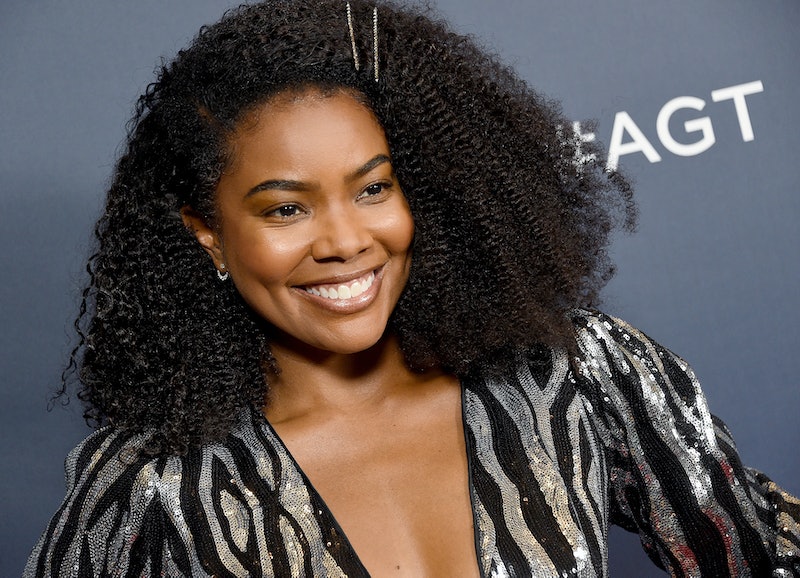 Gabrielle Union may no longer be on America's Got Talent, but she's still fighting to change her former workplace for the better. Six months since leaving the reality show, Gabrielle Union is opening up about the toxic environment at AGT in a new interview with Variety. Union left her position as judge on the show in November 2019, with outlets reporting that she was pushed out after expressing concerns over racist incidents and an unhealthy working environment caused by fellow judge Simon Cowell's smoking.

In the new interview, Union spoke about a series of alleged racist incidents, including a remark made on set by Jay Leno, who allegedly said Cowell's portrait of his dogs looked like food items at a Korean restaurant. (Bustle previously reached out to Leno for comment on the supposed joke, but did not receive a response.) “I gasped. I froze," she said. "Other things had already happened, but at this point, it was so wildly racist.” Though she didn't confront Leno in the moment, Union said she took her concerns to producers who assured her that the joke would be "deleted" and "edited out."

Speaking about another incident of alleged racism on set, allegedly featuring a white male contestant performing a Beyoncé song in black gloves, an expression of blackface, Union said that editing was simply not an adequate response to the problem. "You cannot edit out what we just experienced," she explained to Variety. "There is not an edit button in my brain or in my soul. To experience this kind of racism at my job and there be nothing done about it, no discipline, no companywide email, no reminder of what is appropriate in the workplace?"

In response to Union's interview, NBCUniversal, Fremantle, and Syco released a statement to Deadline that confirmed results of an outside investigation, which took place after Union first left the show and spoke out about the show's work environment. “It has been revealed that no one associated with the show made any insensitive or derogatory remarks about Ms. Union’s appearance, and that neither race nor gender was a contributing factor in the advancement or elimination of contestants at any time,” reads the statement. “The investigation has shown that the concerns raised by Ms. Union had no bearing on the decision not to exercise the option on her contract.” The network also stated that the investigation "highlighted some areas in which reporting processes could be improved," but did not elaborate.

In her interview, Union also addressed Cowell, saying that she has been severely allergic to cigarette smoke since childhood and his indoor smoking (which is not legal in California workplaces) made her sick for two months. "It was a cold that lingered, and turned into bronchitis, because I couldn’t shake it," she said. "It impacted my voice, which affects my ability to do my job." She also added that complaining about it on her first day was scary, considering that Cowell was "the most powerful person" on the show.

“It was challenging to tend to my illness without being made to feel like I’m responsible for my own sickness," she continued. "It put me in a position from day one where I felt othered. I felt isolated. I felt singled out as being difficult, when I’m asking for basic laws to be followed." In response, Cowell's spokesperson told Variety that “when he was directly informed of the smoking complaint during the first couple of days of the season, he immediately changed his behavior and the issue was never raised again.”

Overall, Union hopes that her experiences can help every corporation improve its workplace procedures and diversity measures. “At the end of all this, my goal is real change — and not just on this show but for the larger parent company," she said.