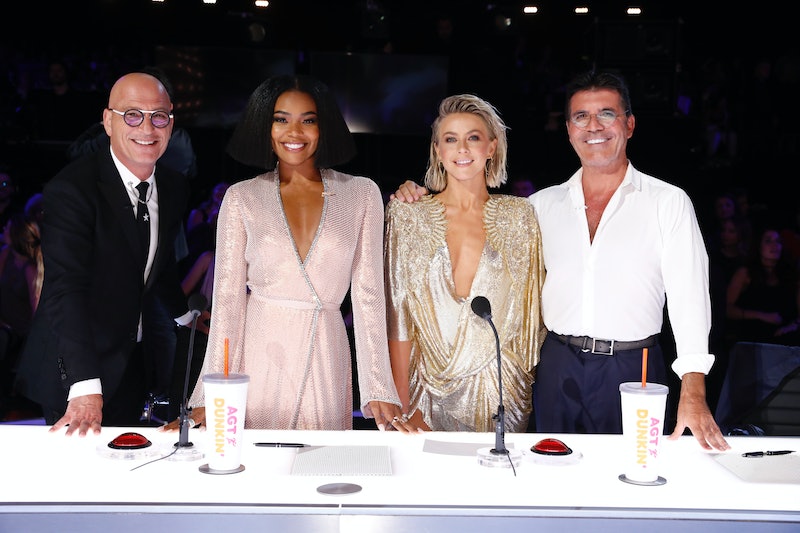 In a tweet on Dec. 4, Gabrielle Union updated fans on the America's Got Talent controversy, and it looks like she sat down and talked with NBC about it. Last month, Union was reportedly let go as a judge on the show following complaints of a toxic workplace culture. "We had a lengthy 5-hour, and what I thought to be, productive meeting yesterday," she Tweeted on Wednesday. "I was able to, again, express my unfiltered truth. I led with transparency and my desire and hope for real change."

The same day, NBC also released a statement regarding the meeting with Union. "The initial conversation was candid and productive," it read. "While there will be a further investigation to get a deeper understanding of the facts, we are working with Gabrielle to come to a positive resolution.”

This meeting comes a few days after NBC production companies Fremantle and Syco said they were "working with Ms. Union through her representatives." The full statement reads:

“We remain committed to ensuring a respectful workplace for all employees and take very seriously any questions about workplace culture. We are working with Ms. Union through her representatives to hear more about her concerns, following which we will take whatever next steps may be appropriate.”

Prior to that, NBC and the two production companies defended the show's "long history of inclusivity and diversity in both our talent and the acts championed by the show" and said that "producers take any issues on set seriously.”

Before her departure, Union reportedly made complaints about a few "offensive" on-set incidents that supposedly went unaddressed by production. According to a Nov. 26 Variety report, Union "urg[ed] producers” to report a racist joke reportedly made by guest judge Jay Leno to human resources. Variety also wrote that Union reportedly received criticism over her hairstyles, which were deemed “too black." Bustle has reached out to Leno for comment.

Union's fellow Season 14 judge Julianne Hough was also let go from the show. In response to Variety's report, Hough denied any problems between her and the network, telling the publication she was “happy to continue my working relationship with NBC." In a Dec. 3 interview with People Now, Hough again addressed her AGT departure saying, "I would just say that — my goodness. I just believe and value at the highest regard that everybody has a voice and should be heard, first and foremost.”

She added, “And then I believe that the paradigm of the workplace and how you do business and work with people now, it’s shifting, and I think that the people that really want to see change happen are going to authentically and positively…do that. That is all I have to say about that."

After news of Union leaving the show broke, fellow celebrities came out in support including Grey's Anatomy's Ellen Pompeo, Shonda Rhimes, and Eva Longoria, who called for NBC to "commit to long-term, concrete action to fix its toxic workplace culture and ensure safety and equity for all its workers."

SAG-AFTRA has launched an investigation into Union and Hough's exit from AGT.

More like this
Erika Jayne's Estranged Husband Tom Girardi Has Been Indicted On Fraud Charges
By Jake Viswanath
'RHOSLC’s Heather & Whitney Are Still On A “Friendship Break” After Season 3 Reunion
By Jake Viswanath
RHOP’s Robyn Dixon Explained Why Juan Paid For Another Woman's Hotel Room
By Brad Witter
Vanessa Bauer Is Reportedly Dating Her 'Dancing On Ice' Partner
By Darshita Goyal
Get Even More From Bustle — Sign Up For The Newsletter
From hair trends to relationship advice, our daily newsletter has everything you need to sound like a person who’s on TikTok, even if you aren’t.