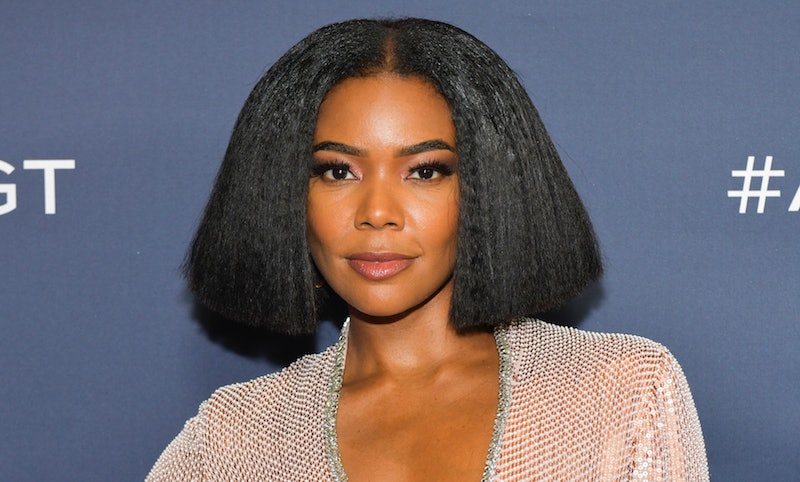 After a week of controversy, NBC released a statement about Gabrielle Union’s departure from America’s Got Talent. NBC production company Fremantle and Syco issued a joint statement on Sunday, Dec. 1 and said the network was working with Union to “hear more about her concerns” on the heels of her exit from the show as a judge. Bustle reached out to representatives for Union for comment, but did not receive an immediate response.

“We remain committed to ensuring a respectful workplace for all employees and take very seriously any questions about workplace culture. We are working with Ms. Union through her representatives to hear more about her concerns, following which we will take whatever next steps may be appropriate.”

On Twitter, Union seemingly issued her own response to the statement and retweeted a tweet from user @JoelleMonique that outlined the three components of an effective apology: “1. Sincerely admit wrong doing directly to the offended party. 2. Be twice as loud correcting your mistake as you were making the mistake. 3. Lay out steps to correct your behavior in the future.” Union wrote in response to the tweet, “This! This! AND THIIISSSSSSS!!!!!!”

NBC's statement comes nearly a week after Variety reported that Union (as well as Julianne Hough) had been let go from AGT after Union reportedly lodged complaints about the show's toxic workplace culture. The Nov. 25 report claimed Union had been ousted after she “urged producers” to report a racist joke reportedly made by guest judge Jay Leno to human resources. Union, who joined Season 14 in February, was also reportedly labeled as “difficult” for complaining about Simon Cowell’s habit of smoking indoors and asking drag contestants for their preferred pronouns, as per Vulture.

Union was also reportedly subjected to criticism for her hairstyles, which had been deemed as “too black,” as per Variety. She also expressed concern over a segment that never aired where a white contestant reportedly impersonated Beyoncé in black gloves; Union reportedly referred to the ordeal as “blackface hands,” as per Vulture. Upon the publication of Vulture's Nov. 27 report, NBC and Fremantle issued a statement about the allegations and said the show "has a long history of inclusivity and diversity in both our talent and the acts championed by the show" and that "producers take any issues on set seriously.”

The news that Union's contract wasn't renewed after her reported efforts to champion inclusivity on the show soon sparked uproar online as celebrities like Patricia Arquette, Ellen Pompeo, and more rallied behind her, while Time’s Up hailed Union for “speaking up for what’s right." Union has since broken her silence on her departure on Twitter. “So many tears, so much gratitude," she tweeted on Nov. 27. "THANK YOU! Just when you feel lost, adrift, alone... you got me up off the ground. Humbled and thankful, forever.”

On Twitter on Nov. 27, Union’s husband Dwyane Wade praised his wife in a series of tweets. He also linked his wife's addition to the show to its growing ratings.

Wade wrote, in part, "[Cheers] to you @itsgabrielleu on not losing sight of the lessons we’ve talked about teaching our daughter and for kicking ass while you were on that platform."