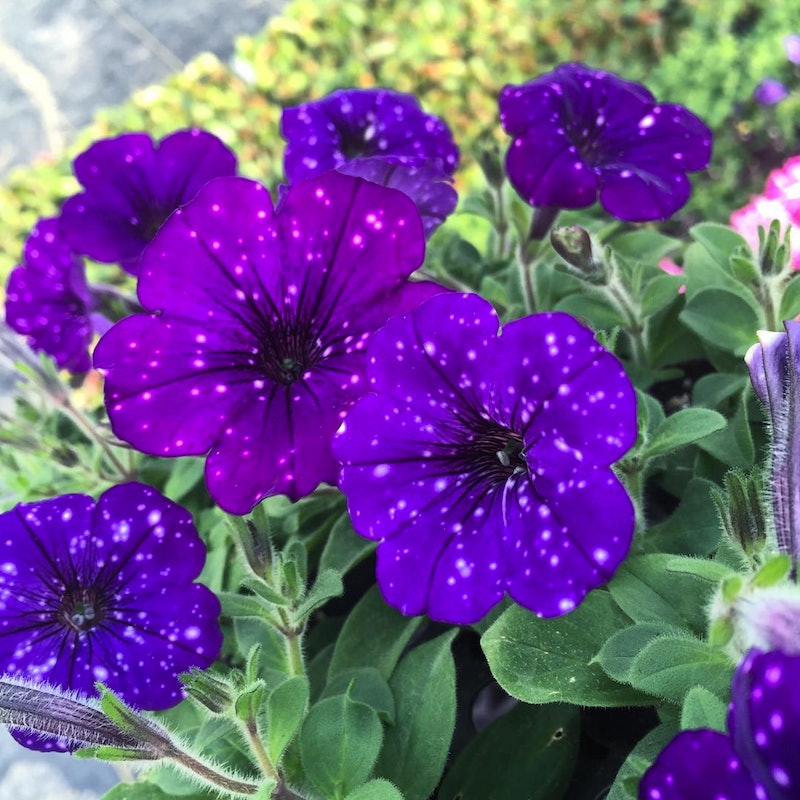 If you don't have time to board a spaceship and explore the outer reaches of the universe, there's another option that's much easier: stop and smell the flowers. Literally. People of the interwebs are falling in love with Night Sky Petunias, aka Galaxy Flowers, because they're similar to the view you'd have if you looked into a telescope at the starry night sky.

Their scientific name is Petunia cultivars, and they're a deep purple flower covered in specks of white. The flower is native to South America and, interestingly, bears a close relation to tobacco, tomato, potato plants, and eggplants! The plant was initially introduced to Europe in the 19th century where it instantly became famous for adding a beautifully decorative touch to gardens.

Their galactic appearance is due to a variance between nighttime and daytime temperatures. During the day, they need to be kept warm at around 100 degrees Fahrenheit. At night, they night to be in a cool 50 degrees.

Although their five primary colors are yellow, pink, red, white, and purple, petunias come in a variety of hues and patterns (and there are 35 species overall), all of which are simply gorgeous. Who wouldn't want to get lost in a field of these?

This isn't the first time we've been mesmerized by something resembling outer space. In fact, this craze grabbed hold of us months ago, most notably marked by the galaxy food trend. We were introduced to galaxy cake, cupcakes, donuts, cookies, and macarons; galaxy makeup; and even galaxy freckles. To this day, it continues to give other trends a run for their money — like the rainbow trend and the unicorn trend. Our galaxy obsession goes on, with these gorgeous petunias. If I didn't kill everything I plant, you'd find these in the garden I don't have.

For the curious, you can buy Night Sky Petunia seeds on Amazon. Just do your research on the proper growing conditions so they don't shrivel up and meet a sad death.