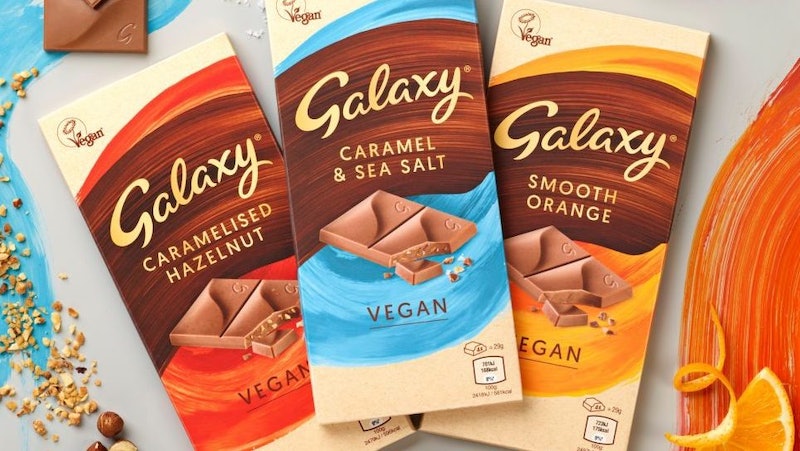 It’s obvious that dark chocolate is a sensible sweet treat for a vegan but, let’s be honest, if you’re looking for a less bitter, and more sugary hit, milk chocolate is where it’s at. And now vegans up and down the UK can rejoice, because Mars will be releasing not just one but three vegan "milk" chocolate Galaxy bars in the very near future.

According to a November 2019 survey by UK nonprofit organisation Veganuary (via Vegan Food Living), vegans actually miss milk chocolate products more than they miss cheese. Speaking about these results Head of Communications at Veganuary Toni Vernelli said: “These results should be a stark wake-up call to companies like Cadbury’s, Mars, and McVities which are missing out on a huge potential market of sweet-toothed vegans!” And it looks like Mars have listened. The new Vegan Society-approved chocolates will come in smooth orange, caramel and sea salt, and caramelised hazelnut.

Kerry Cavanaugh, the unit director of chocolate at Mars has said about their new products:

“This is our first vegan product and we felt it was time to offer fans of our best-selling Galaxy brand more choice. We expect it to be very popular at Christmas for families and friends to share, as well as in Veganuary.”

Veganism is becoming big business, especially here in the UK. According to The Vegan Society, in 2018, the UK launched more vegan products than any other nation. They estimate that the number of vegans in Great Britain has quadrupled between 2014 and 2019, with the figure now standing at 600,000 vegans.

Slowly but surely, brands in Britain are taking notice and are veganising some of their beloved products. Hellmann’s now have a vegan mayonnaise, so nobody’s sandwiches have to go dry; there are vegan Magnums for an indulgent treat; and Wall's have even launched a range of vegan sausage rolls.

The Galaxy new bars will be in stores and on Amazon on Monday Nov. 18, 2019. They will retail at the price of £3 for a 100g bar, making in double the price of your normal Galaxy. This proves that, alrhough vegan products are becoming more popular, they are still pricier than their non-vegan alternatives, meaning there’s still a way to go for vegan products to become fully accessible.

More like this
Ben & Jerry’s New Sundae Flavours Are A Chocoholic’s Dream
By Sophie McEvoy
TikTok Has A Genius Old School Hack For Saving Money
By Sophie McEvoy
What The UK Blocking Scotland’s Gender Recognition Bill Means
By Sam Ramsden
90 Epic Truth Or Drink Questions To Play 'Say It Or Shot It' With
By Bustle UK
Get The Very Best Of Bustle/UK
Sign up for Bustle UK's twice-weekly newsletter, featuring the latest must-watch TV, moving personal stories, and expert advice on the hottest viral buys.